OUT OF MIND » CHANGING ENVIRONMENT & NATURE » GUIDE TO THE NIGHT SKY » Tuesday's Rare 'Blood Moon' Eclipse Will Be The Last Until 2025! Here's How to Watch

Tuesday's Rare 'Blood Moon' Eclipse Will Be The Last Until 2025! Here's How to Watch

We've been treated to spectacular skywatching in 2022, with the rare alignment of five planets in June, and a total lunar eclipse back in May.
But all good things must come to an end. On Tuesday 8 November, Earth will experience the last total lunar eclipse for almost three years.

And trust us, you won't want to miss this.
Known as a ' blood moon' because of the strange reddish hue the full moon takes on, a total lunar eclipse is a fantastic opportunity for the whole family to see a spectacular astronomical phenomenon – no binoculars or special equipment required.
After this week, the next total lunar eclipse won't be until the 13-14 March 2025 (depending on where you're located).
A total lunar eclipse occurs when Earth passes between the Sun and the Moon, casting its shadow across the Moon.
While direct sunlight is completely blocked, Earth's atmosphere is transparent enough so that some light does get through to the Moon.
But this light is refracted, which means that shorter blue wavelengths of light are scattered more than longer red ones, causing the shadow to give the Moon a spooky red-stained glow. Hence the name 'blood moon'. 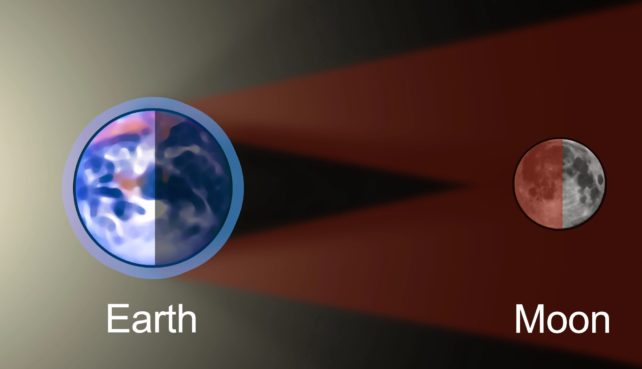 Diagram of a lunar eclipse. Not to scale. (Mike McRae/ScienceAlert)
This atmospheric scattering is the same phenomena to the one that causes sunrises and sunsets to appear reddish here on Earth.

The total eclipse that will occur on 8 November 2022 has totality that lasts a leisurely 1 hour and 25 minutes, which means we all have plenty of time to get outside, get our eyes adjusted to the dark, and see the 'blood moon' plunged an eerie red color by the shadow of our own planet.
This also means the eclipse will be visible to a large portion of the world – everyone on the night side of Earth for the hour or so after 0800 UTC will be able to witness the phenomenon.
So that means large parts of Australia, New Zealand, and Asia will see the eclipse on their Tuesday night. For Australians, the eclipse starts at 8.09pm AEDT and totality will occur from 9.16pm to 10.41pm AEDT.
North America and parts of South America will also be treated to seeing the eclipse in the early hours of Tuesday morning before the sun rises – the whole thing kicks off for them just after 3am EST, but totality will last from 5.16am to 6.41am EST.

You can use the tool on TimeandDate.com to find out when the eclipse will occur for you.
Other regions seeing at least some parts of the eclipse include North/East Europe, the Pacific, Atlantic and Indian Oceans, the Arctic and Antarctica.

The path of the total lunar eclipse on 8 November 2022. (TimeandDate.com)
Watching our familiar satellite turn rusty in color is in itself worth waking up early – or staying up late – for.
But this time there's the added bonus of Uranus making a rare appearance, too, for those who have binoculars handy.
During totality, without the light of the Moon blocking out the distant icy planet, Uranus should appear like a bright star about a finger's width above our satellite. 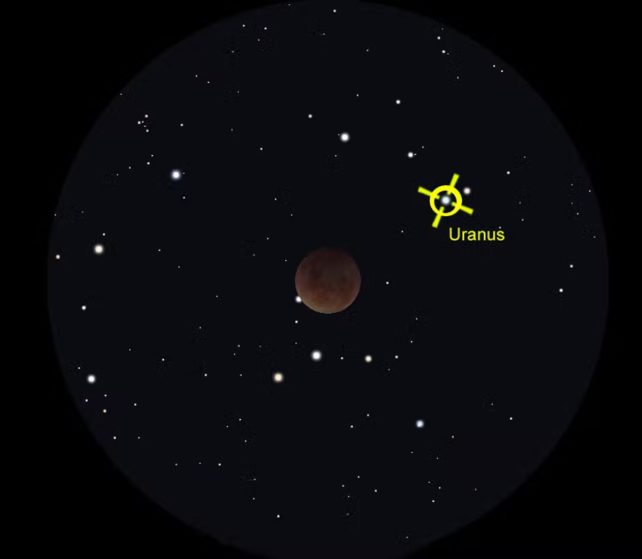 If you're not in an area that can view the eclipse this time, don't stress, you can watch along online, too! Griffith Observatory in LA, TimeandDate, and the Italian-based Virtual Telescope Project both have livestreams.
Wherever you are, we hope you experience some clear skies or at least a good internet connection and are able to witness our planet's shadow changing the color of our satellite.
There's nothing quite like an eclipse to make us feel simultaneously so small and so connected to the cosmos at the same time.
Happy sky watching!

OUT OF MIND » CHANGING ENVIRONMENT & NATURE » GUIDE TO THE NIGHT SKY » Tuesday's Rare 'Blood Moon' Eclipse Will Be The Last Until 2025! Here's How to Watch