rancher. According to KCRA, the “bright ball of light” hurling towards the ” middle of nowhere ” was seen by many Californians. Spectators were able to obtain photos and videos of the supposed meteor that detailed the object falling toward the ground. Viewers can see mere remnants left of the home in footage obtained by KCRA.
Homeowner Dustin Procita mentioned that his property encompasses very quiet land in the country “where cattle graze.” He was sitting on the couch listening to music when the meteor hit his porch.
“I heard a big bang,” Procita shared with KCRA, “I started to smell smoke. I went onto my porch and it was completely engulfed in flames.”


KCRA noted that the blaze soon consumed the entire house. Procita was able to get out safely and save one of two dogs in the home with him at the time of the fire. After several hours of fighting, Penn Valley Fire Department firefighters were able to contain the fire before more damage was done to the surrounding area. Nevada County authorities continue to investigate the meteor as a possible cause of the fire.

Admin
Posts : 107552
Join date : 2012-01-04
Location : Woodstock Nation
This bright bolide is a Southern Taurid spotted over Spain on November 7, at 1:53 local time (equivalent to 0:53 universal time). The event was generated by a rock (a meteoroid) from Comet 2P/Encke that hit the atmosphere at about 110,000 km/h. The fireball overflew the provinces of Avila and Salamanca (Spain). It began at an altitude of about 106 km over Ávila, moved north, and ended at a height of around 62 km over the province of Salamanca. This bright meteor was recorded in the framework of the SMART project, operated by the Southwestern Europe Meteor Network (SWEMN) from the meteor-observing stations located at La Hita, Huelva, Sevilla, El Guijo, Calar Alto, Sierra Nevada, La Sagra, ESA Casas de Millán, and ESA Cebreros. The event has been analyzed by the principal investigator of the SMART project: Dr. Jose M. Madiedo, from the Institute of Astrophysics of Andalusia (IAA-CSIC).

A bright Taurid fireball was seen off the coast of Massachusetts and Rhode Island at 01:05 UTC on November 4, 2022 (21:05 EDT, November 3). This fireball was bright enough to be detected by the Geostationary Lightning Mapper onboard the GOES-16 satellite.
The American Meteor Society (AMS) received 169 reports, with most of them from Massachusetts, Rhode Island, Connecticut and New Hampshire.1
An analysis of these accounts using constraints provided by internet-accessible cameras in the region shows that the fireball trajectory was entirely over the Atlantic Ocean, starting about 96 km (59 miles) above a point 37 km (23 miles) south of Nantucket.2 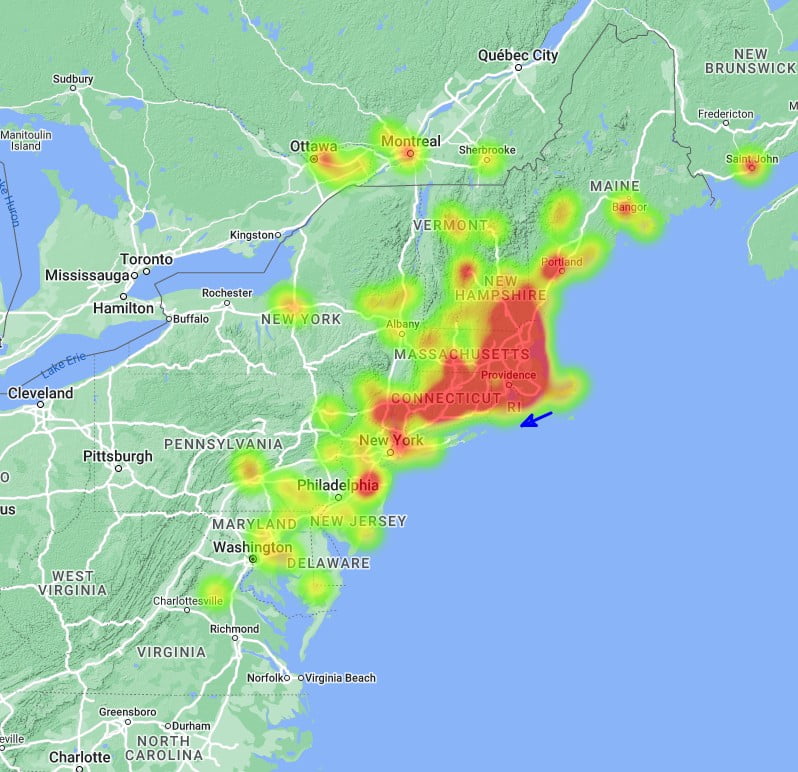 Bright Taurid fireball off the coast of Massachusetts and Rhode Island on November 4, 2022 – heatmap. Credit: AMS
The object moved southwest at 128 700 km/h (80 000 mph), covering a total distance of 75 km (47 miles) before disintegrating at an altitude of 67 km (42 miles) above the ocean.
This meteor was a member of the Taurid meteor shower, which has exhibited increased activity over the past couple of weeks.

There are currently many sightings of Taurids over the United States each night, NASA Meteor Watch staff noted.