CRISPR could help bacteria destroy cancer and gulp up methane CRISPR could help bacteria destroy cancer and gulp up methane

It all comes full circle.

As it turns out, the most powerful tool for tinkering with nature’s blueprints came from nature itself. Developed in the early 2010s, CRISPR is a technique for editing DNA with painstaking precision. But as high-tech as it sounds, CRISPR wasn’t dreamed up in a lab.
The basic machinery — a protein that targets and cuts specific DNA sequences — evolved naturally in bacteria, where it’s part of a simple immune system that fends off viruses and other threats.

While the bulk of CRISPR work has been done in other kinds of cells due to technical challenges, plenty of researchers are now using CRISPR to engineer microbes that could one day suck up greenhouse gas and help fight cancer — among plenty of other creative uses.
Many of these projects are still in the proof-of-concept stage, but there’s no shortage of big ideas. “The fun thing about the CRISPR field is that the list of applications just seems to go on and on and on,” says Chase Beisel, a bioengineer at the Helmholtz Centre for Infection Research in Germany. 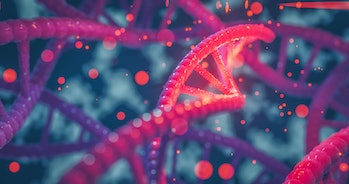 It’s difficult to manipulate bacterial DNA with CRISPR — but not impossible.Shutterstock

Around [url=https://www.ncbi.nlm.nih.gov/pmc/articles/PMC8071187/#:~:text=CRISPR (Clustered Regularly Interspaced Short,% of archaea [3].]half[/url] of all bacteria house different types of CRISPR defense systems, which identify bits of foreign DNA, make a copy, and store it in a special memory bank. The bacteria then use that information to identify and destroy the invader the next time it shows up (similar to the way vaccines train the human immune system to “remember” a virus). This last step is accomplished by proteins that act like a pair of scissors, cutting the virus’s DNA and rendering it useless.

Most CRISPR gene-editing technologies are based on a system that evolved in the species Streptococcus pyogenes, which causes strep throat. The system, known as CRISPR-Cas9, is named after the protein that hunts down the invading DNA, checks for a match, and makes the fatal snip.
In the lab, scientists direct the Cas9 protein to slash the double-helix at a pre-programmed location. When messed with, eukaryotic cells — the kind found in plants and animals — repair their broken strands of DNA through sophisticated repair mechanisms.

“CRISPR is really the cleanup step.”

This process is prone to error, often creating mutations that stop a gene from functioning. To find out what a particular gene does, researchers can “silence” it and see what happens.
But prokaryotes like bacteria generally can’t make the same kind of repairs, so it’s difficult to manipulate them with CRISPR-Cas9. “That actually represents a pretty fundamental difference that creates a lot of the headaches in bacteria that you just don't have in eukaryotic cells,” Beisel says. This is one reason why CRISPR researchers and engineers have generally paid more attention to eukaryotic cells.
Because CRISPR can destroy segments of DNA, the technique has proven to be especially good at simply killing bacteria. For many bacteria engineering projects, the actual gene editing is done through other methods, and “CRISPR is really the cleanup step,” says Beisel. This power might also make CRISPR a useful weapon against antibiotic-resistant bacteria. 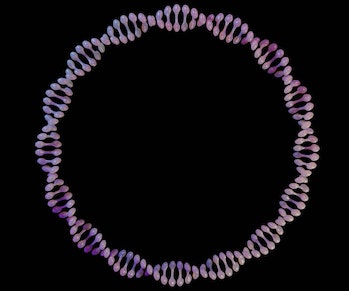 
Despite how tough it is to edit bacterial genes, some researchers are forging ahead. Most bacterial engineering projects use plasmids — circular sections of DNA that can serve any number of purposes in bacteria, such as killing rival bacteria.
Scientists can build new plasmids and use an electric current to get the cell to suck them up, a bit like acquiring new powers in the video game BioShock.
Plasmids also allow scientists to use CRISPR on bacterial genes: They can insert a plasmid containing a CRISPR gene system into the bacteria, where it awaits further orders to make the desired edits.

That’s the approach taken by a research team at the C1 Gas Refinery, a program funded by the government of South Korea aimed at finding ways to turn greenhouse gas pollution into usable products. One project involves engineering methanotrophs — bacteria that eat methane — which the scientists say could be used to generate useful substances while sucking up a powerful greenhouse gas.
In a recent study, they described their newest creation: a tool called a CRISPR base editor that can deactivate, or “knock out,” a target gene. To test it out, they inserted their plasmid into a strain of Methylococcus capsulatus — a species found in cows’ guts — and introduced other genes in a bid to maximize the bacteria’s ability to digest methane.
They then directed the base editor to disable part of the bacteria’s natural digestion pathway. The modified microbes performed admirably, producing 2,090 milligrams of mevalonate — a moisturizer found in some cosmetics — per liter of methane that they took in. 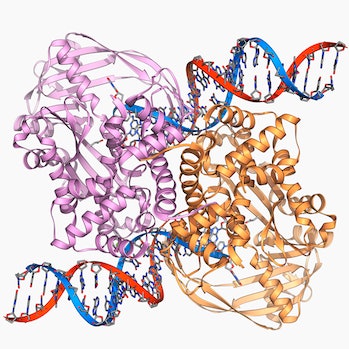 Scientists at the Sternberg Lab are harnessing a microscopic vagabond known as a transposon.LAGUNA DESIGN/Science Photo Library/Getty Images

Some CRISPR projects are a little more lighthearted. The technique can be used to add new segments of DNA to bacteria, which led a group of scientists at Harvard Medical School in 2017 to encode a black-and-white film of a man on a horse (featured more recently in the movie Nope) into the genome of E. coli.

But more importantly, CRISPR-edited bacteria could directly benefit human health. Scientists at the Sternberg Lab at Columbia University recently developed a powerful way to insert large segments of DNA — even an entire human gene — into a targeted spot in the genome. The technique takes advantage of a clever trick developed in nature by a microscopic vagabond known as a transposon.
This is “a piece of DNA that encodes the genes necessary to cut itself out from the genome and jump to a new place,” says Diego Gelsinger, one of the lab’s postdoctoral researchers. Some of these transposons “evolved a way to use CRISPR as a kind of homing mechanism to pick where it'll jump, rather than just jumping around randomly,” he explains.
The technology created by the Sternberg Lab (called a “transposase”) uses custom-made RNA along with CRISPR-Cas proteins to guide the transposon with the DNA payload to the right spot. It then cuts one of the strands, inserts itself into the sequence, and waits for the host bacteria to zip it back together.
Gelsinger’s specialty, the gut microbiome — the community of bacteria that lives in the human digestive system — is now considered a rising superstar in the research world as scientists uncover its central role in people’s overall health. With help from CRISPR transposases, these bacteria could one day offer a promising avenue for treating some genetic diseases without actually altering the patient’s genes, says Gelsinger.

“I think there's so much promise.”

For example, phenylketonuria is a rare disease caused by a mutation in the PAH gene, which aids in breaking down a particular amino acid. As a result, children with the disease have to limit the amount of protein in their diet or risk losing some of their brain function. CRISPR transposases could allow scientists to insert a full, functional PAH gene into a patient’s gut bacteria, which would help them digest the amino acid.

CRISPR-modified bacteria are also drawing attention as an alternative to chemotherapy, a widely used cancer treatment that comes with harsh side effects. “My hope is that we're at the very beginning. I think there's so much promise,” says Kaitlin Dailey, a research instructor at the University of Nebraska Medical Center who is studying ways to treat pancreatic cancer with bacteria.
Species like Clostridium novyi have a natural ability to seek and destroy tumor cells, and they’re right at home in the acidic, low-oxygen environment at the heart of the tumor. In a future treatment, a small colony of dormant bacteria could be injected into the patient’s bloodstream, where the microbes would seek out the tumor, start growing, and “effectively eat the tumor from the inside out,” Dailey says.
This method might be especially helpful for tumors that are spreading to other parts of the body, since the bacteria could hunt out tumors wherever they happen to be. When the bacteria reach the higher-oxygen space outside the tumor, they would either die or return to the dormant form that would be ejected by the body’s immune system, Dailey explains.
CRISPR gene editing could also make bacteria even more effective at their disease-fighting jobs. For example, the microbes need to be weakened before they’re injected so they don’t cause a deadly infection.
But for cancer treatment, the trick is making sure they stay strong enough to attack the tumor. C. novyi is especially good at striking this balance, according to Dailey. Other species are better at finding tumors or keeping inflammation down, and genetic engineering might combine several of these attributes into one super-microbe.

The future of ‘bugs as drugs’ 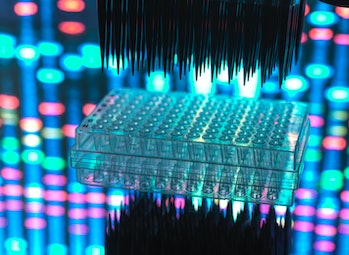 As with any new technology, the consequences of genetic engineering can be notoriously difficult to predict.TEK IMAGE/SCIENCE PHOTO LIBRARY/Science Photo Library/Getty Images


Bacteria are already approved for some cancer treatments, like a strain of Mycobacterium bovis for bladder cancer that activates the body’s immune system to help destroy the tumor. And more could be on the way. This year, the National Institutes of Health has sought out funding proposals for researchers studying bacteria-based cancer therapies, or “bugs as drugs.”
But the research is still in its early stages, and there are a few unique challenges when turning bacteria into medicine. These microbes like to mix and match their genes through a variety of processes known as horizontal gene transfer. So there’s a risk that they will swap genes while growing or in the course of treatment, which can ruin the genomes that the engineers worked so hard to put together and make them less effective.

Researchers are coming to understand the power of bacteria.

Beyond just tinkering with bacteria, genetic engineering as a whole often raises concerns that scientists are tampering with a highly complex system that they don’t fully understand. As with any new technology, the consequences can be notoriously difficult to predict.
Still, researchers are coming to understand the power of bacteria and how it can be harnessed for bold new uses. Often, it’s a matter of enhancing what the microbes can already do. And after all, the tools they use, like transposons and CRISPR itself, are also nature’s own inventions.
“Life already evolved it,” says Diego Gelsinger. “So we don't have to do the work ourselves.”

» Deutsche Bank Threatens US Justice Department: If you destroy our bank with your fine, it will destroy your own U.S. banking system
» WARNING METHANE PLUMES
» California Methane Leak Update
» The Mars methane mystery deepens
» The Company Behind the Methane Disaster Knew It’s Well Was Leaking 24 Years Ago