OUT OF MIND » THE INSANITY OF REALITY » GOVERNMENTS & THE NEW WORLD ORDER » SICK: Canada Offers Veteran and Former Paralympian Assisted Suicide When She Asks for a Stairlift

SICK: Canada Offers Veteran and Former Paralympian Assisted Suicide When She Asks for a Stairlift

SICK: Canada Offers Veteran and Former Paralympian Assisted Suicide When She Asks for a Stairlift Tue Dec 06, 2022 11:22 am

A Canadian veteran and former Paralympian said last week before a parliamentary committee that she was offered help with suicide when she asked for a wheelchair lift to be installed in her home.
Retired Corporal Christine Gauthier, 52, who competed in the 2016 Paralympics in Rio de Janeiro, revealed to the committee on Thursday that a caseworker from the Veterans Affairs Canada (VAC) had offered to provide her with a medically-assisted suicide kit, according to Fox News.
The event happened during a phone call to VAC, where Gauthier described her deteriorating health condition.
“I have a letter saying that if you’re so desperate, madam, we can offer you, MAID, medical assistance in dying,” Gauthier said in a hearing before the House of Commons Veterans Affairs Committee.

Medical Assistance in Dying ([url=http://www.phsa.ca/health-info/medical-assistance-in-dying#:~:text=ShortPageContent,to intentionally end their life.]MAID[/url]) is a process through which a doctor or nurse practitioner assists an individual, at their request, to intentionally end their life.
“I was completely shocked and in despair,” Gauthier told CTV. “It is remotely just what they’re doing: exhausting us to the point of no return.”

“It was just getting too much and unbearable. And the person at VAC mentioned at that point, ‘Well, you know that we can assist you with assisted dying now if you’d like.’ And I was just shocked because I was like, ‘Are you serious?’ Like that easy, you’re going to be helping me to die but you won’t help me to live?” she added.
The veterans affairs minister admitted that at least four other veterans were offered the same thing.
Watch the video below: 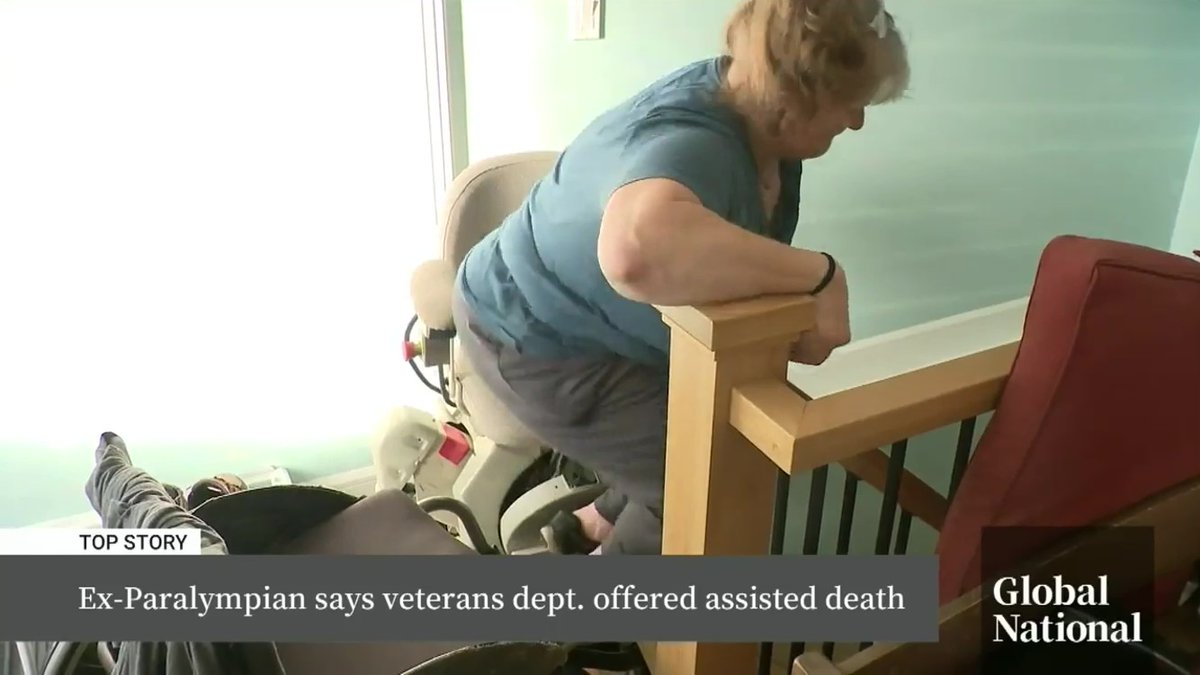 In 1989, Gauthier suffered permanent damage to her knees and spine after jumping in a deep hole while training on an obstacle course.
Gauthier, who competed in the 2016 Paralympic Games and the 2016 Invictus Games as a para-canoeist, told the committee she sent letters detailing her experiences to Prime Minister Justin Trudeau and Veterans Affairs Minister Lawrence MacAulay. A spokesperson for MacAulay said Veterans Affairs is taking the issue “very seriously,” while adding that providing advice on MAID is “not a VAC service.”
“Our employees have no role or mandate to recommend or raise it. Considerations for MAID are the subject of discussions between a patient and their primary care providers to determine appropriateness in each individual context,” Erika Lashbrook Knutson, press secretary for MacAulay’s office, said in a statement to CTV News on Friday.
MacAulay’s office also told CTV News Veterans Affairs took actions to ensure this doesn’t happen again, such as issuing a directive ordering all employees to “not provide advice or suggestions to Veterans on the issue of MAID” and implementing mandatory training.
When asked about Gauthier’s experience being offered MAID, Trudeau called it “absolutely unacceptable.”
“We are following up with investigations, we are changing protocols to ensure what should seem obvious to all of us, that it is not the place of Veterans Affairs Canada … to offer them medical assistance in dying as a matter of course,” he told reporters in Vancouver on Friday.
“The issue of medical assistance in dying is a deeply personal one. It is a deeply difficult one for individuals and families to take on at an extraordinarily challenging moment in their lives. And something that we have to ensure is gotten right,” Trudeau added.

It can be recalled that sick propaganda featuring a British Columbia woman who performed assisted suicide was exploited by a Canadian clothing retailer to market its products.
After Canadians celebrated Thanksgiving on October 10, Jennifer Hatch, 37, had herself killed through the controversial Canadian MAID (Medical Assistance in Dying) program.
On October 24, La Maison Simons, one of the most well-known Canadian fashion boutiques, launched an disturbing ad campaign based on Jennyfer’s euthanasia journey.
“As part of its “All is Beauty” marketing strategy, the company released a stunning three-minute video on YouTube called “The Most Beautiful Exit” about Jennyfer as she prepares for “medical assistance in dying,” as it is called in Canada,” Mercatornet reported.

OUT OF MIND » THE INSANITY OF REALITY » GOVERNMENTS & THE NEW WORLD ORDER » SICK: Canada Offers Veteran and Former Paralympian Assisted Suicide When She Asks for a Stairlift

» THOUGHTS ON EUTHANASIA OR ASSISTED SUICIDE
» Canadian Fashion Firm Releases Ad Celebrating “Beauty” Of Assisted Suicide
» Veterans Put On Skull Masks, March to Expose Epidemic of VA Abuse and Veteran Suicide
» Canada is showing at RBC (Royal Bank of Canada) @ 4.32. That is not the USA, only Canada.
» This Is What An MDMA Assisted Therapy Session Looks Like