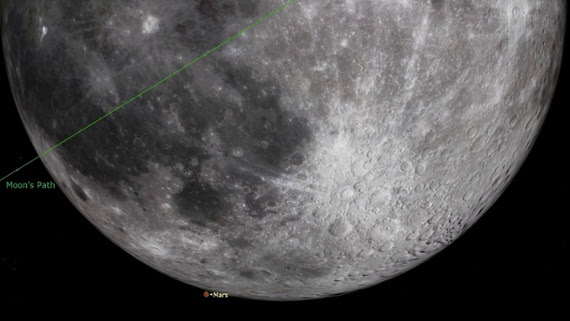 On Wednesday (Dec. 7) the moon will reach its full moon phase as December's aptly-named Cold Moon, the final full moon of 2022, rises for most of the night.

The Cold Moon will also be joined by a guest this year as a bright Mars meets the moon in the sky, eventually disappearing behind the moon in what is known as a lunar occultation before reappearing again. We've put together guides on how to see the event in the sky and how to watch the moon eclipse Mars online courtesy of several free livestreams.

In the build-up to the Cold Moon, the moon has risen an hour earlier each day. Following the full moon and leading to the new moon and the next lunar cycle the moon will rise an hour later each day and will be visible for less and less of the night.

A week after the full moon when the moon is in its last quarter phase, it will rise around midnight and set around noon. By the time of the new moon, the moon rises at sunrise and sets at sunset.
As the times of the rising and setting of the moon change from the full moon to the new moon, the illuminated face of the moon recedes. This goes from fully illuminated during tonight's full moon to half-illuminated during the final quarter moon, then to fully dark during the new moon.
The name for December's full moon, the Cold Moon, is attributed to the tradition of the Mohawk people, according to the Farmer's Almanac (opens in new tab). The name reflects the frigid conditions of December and the increasing grip of winter.
Other names for December's full moon also reflect icy conditions and the deepening of winter. These include the Snow Moon from the Haida and Cherokee traditions and the Western Abenaki people's Winter Maker Moon.


An illustration of the night sky on Dec. 07 showing the full Cold Moon prior to occulting Mars. (Image credit: Sky Safari Astronomy)
Alternative names for the Cold Moon describe the effects of winter on the environment and nature. These include the Cree's Frost Exploding Trees Moon and the Moon of the Popping Trees from the Oglala people. These nature-based names include the Dakota people's name for the December full moon, the Moon When the Deer Shed Their Antlers.
Some names for the December full moon relate to other observations of the period surrounding this full moon, such as the Mohican name for this full moon, the Long Night Moon, which references the fact it rises on the nights close to the winter solstice which are the longest nights of the years.
The next full moon and the first of 2023 is January's Wolf Moon which rises six days into the new year.
The full moon is a great time to try your hand at lunar photography or skywatching. Whether you're new to skywatching or have been it at for years, be sure not to miss our guides for the best binoculars and the best telescopes to view the occultation of Mars and other incredible things in the night sky. For capturing the best Mars pictures you can, check out our recommendations for the best cameras for astrophotography and best lenses for astrophotography. Meanwhile, for capturing lunar images, we have a guide on how to photograph the moon.
Editor's Note: If you catch a good photo of December's full moon and would like to share it with Space.com's readers, send your photo(s), comments, and your name and location to spacephotos@space.com.