The creator of 'Everyday Astronaut' is among the eight.

A Japanese billionaire picked his crewmates for the first-ever artist-centered mission.

Yusaku Maezawa, who made his fortune as an online fashion retailer, announced the eight people who would be flying with him on the dearMoon mission, which aims to use a SpaceX Starship to fly around the moon as soon as next year.

"I hope each and every one will recognize the responsibility that comes with leaving the Earth, travelling to the moon and back," Maezawa says in the video in Japanese, with a translation provided in-video.

The previously-announced 2023 launch date may push back substantially, however, as Starship has not yet been approved for an orbital journey around Earth, let alone a flight to the moon.
The spaceship has been grounded for more than 18 months as SpaceX awaits approval from the Federal Aviation Administration regarding environmental assessment requirements at its Starbase launch location in South Texas.

The crew of Yusaku Maezawa's (center) dearMoon mission around the moon on a SpaceX Starship rocket. (Image credit: dearMoon)
Riding along with Maezawa will be:


Each member of the dearMoon crew was briefly quoted in a video (opens in new tab) from the dearMoon YouTube channel, and the announcement was confirmed on Dodd's and Maezawa's Twitter feeds (opens in new tab).
"I don't know what it's going to do to me emotionally, and I guess that's part of the adventure," Dodd says in the video.
Adds Adam, "I expect that this mission will bring about many changes personally and professionally."
The video also includes several views of Starship under testing, including at least one of the static fires of the SpaceX system. 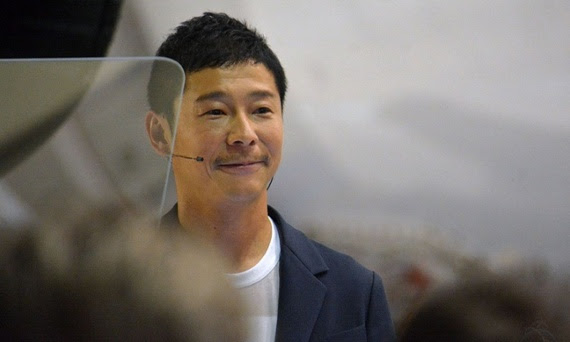 Japanese billionaire Yusaku Maezawa is underwriting a 2023 flight to the moon and back. (Image credit: collectSPACE.com)
Maezawa's dearMoon project was announced in 2018 to bring astronauts to the moon, following a controversial "girlfriend contest" for a now-defunct space mission. Maezawa is underwriting the cost of the seats for the crew.
When the applications for dearMoon opened in August 2021, Maezawa did not specify what qualifications were required to join the mission.
In December of that year, the Japanese billionaire flew to the International Space Station on a short stint along with his his videographer, Yozo Hirano, and different Russian cosmonauts on a Soyuz spacecraft during launch and landing.
Starship has also been tasked with putting NASA astronauts on the moon during some Artemis program missions, and another billionaire (Dennis Tito) booked a seat in 2021 for himself and his wife Akiko on a future flight around the moon, on a mission for which other people will be announced.
Elizabeth Howell is the co-author of "Why Am I Taller (opens in new tab)?" (ECW Press, 2022; with Canadian astronaut Dave Williams), a book about space medicine. Follow her on Twitter @howellspace (opens in new tab). Follow us on Twitter @Spacedotcom (opens in new tab) or Facebook (opens in new tab).
Join our Space Forums to keep talking space on the latest missions, night sky and more! And if you have a news tip, correction or comment, let us know at: community@space.com.

» Starship crash: SpaceX reveals cause of Starship SN9's crash and 'rapid disassembly'
» Jeff Bezos unveils 'Blue Moon' lunar lander
» Bezos Unveils "Moon Mission" Plans In Race with Elon Musk
» What The Hell Crashed On The Moon NASA And Why Are You Still Silent?
» Classified: What The Hell Lives On The Moon NASA, What Did Our Astronauts Really see