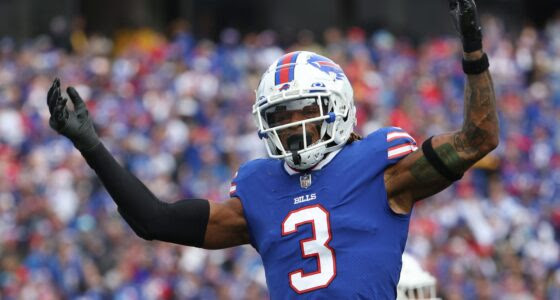 Young king is out of the hospital!
Buffalo Bills safety Damar Hamlin is back home in Buffalo after spending a week at the University of Cincinnati Medical Center after suffering cardiac arrest in a week 17 game against the Bengals, doctors said Jan. 9.
Speaking to the media, Dr. William A. Knight said that he went to the airport with Hamlin, saying that he is “doing well” and it’s the “beginning of the next stage of his recovery.”

Knight also noted that “it is entirely too premature to discuss, not only his football; it’s that we’re really focused on his day-to-day recovery.”

I’m not going to lie. When this whole thing happened, I thought we were looking at a situation where Damar Hamlin was going to pass away. Thank God, that wasn’t the case.
Now, I can’t get too much into what I think about the Hamlin situation. There’s a ton of unanswered questions around this whole thing, and we still have yet to receive any kind of explanation on the matter, but of course, like everybody, I have my views.
At the current moment, I’m just happy that Damar Hamlin is out of the hospital and back home after an incredibly scary and eerie incident. I know it’s too early to talk about him being back on the football field, but I hope to see him continue his career, and it wouldn’t surprise me to see that happen with how quick he recovered. Keep that up, young king.

Re: Damar Hamlin Released From Hospital One Week After On-Field Cardiac Arrest Tue Jan 10, 2023 1:56 am

» BREAKING: Buffalo Bills safety Damar Hamlin collapsed on the field - Will this be the tipping point?
» Doctors’ Mum On Cause Of Damar Hamlin’s Heart Attack
» Fauci Pulled From Retirement To Control Narrative on Damar Hamlin
» Heart Attack vs. Cardiac Arrest – Do You Know The Difference?
» VAERS Data Showing Juvenile "Cardiac Arrest" After Vax plus MORE