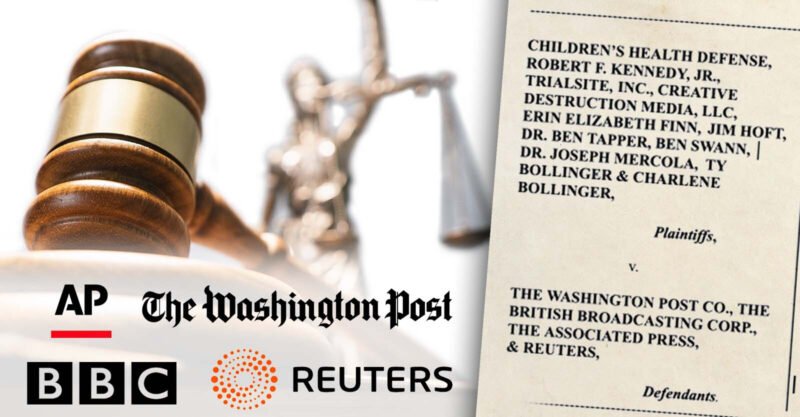 Miss a day, miss a lot. Subscribe to The Defender's Top News of the Day. It's free.
In a live interview this evening on Fox News’ “Tucker Carlson Tonight,” Robert F. Kennedy, Jr., chairman and chief litigation counsel for Children’s Health Defense (CHD), announced that he and several other plaintiffs filed a groundbreaking novel lawsuit making antitrust and constitutional claims against legacy media outlets.
The lawsuit targets the Trusted News Initiative (TNI), a self-described “industry partnership” launched in March 2020 by several of the world’s largest news organizations, including the BBC, The Associated Press (AP), Reuters and The Washington Post — all of which are named as defendants in the lawsuit.
Filed today in the U.S. District Court for the Northern District of Texas-Amarillo Division, the lawsuit alleges these outlets partnered with several Big Tech firms to “collectively censor online news,” including stories about COVID-19 and the 2020 U.S. presidential election that were not aligned with official narratives regarding those issues.
Plaintiffs in the lawsuit include CHD, Kennedy, Creative Destruction Media, Trial Site News, Ty and Charlene Bollinger (founders of The Truth About Cancer and The Truth About Vaccines), Erin Elizabeth Finn (publisher of Health Nut News), Jim Hoft (founder of The Gateway Pundit), Dr. Joseph Mercola and Ben Tapper, a chiropractor.


TNI, in concert with Big Tech, censored COVID and 2020 election narratives
According to the lawsuit, TNI’s legacy news members acted in concert with their Big Tech partners to censor a wide range of non-establishment narratives pertaining to COVID-19 and to the U.S. presidential election of 2020, stating:
“TNI members have deemed the following to be ‘misinformation’ that could not be published on the world’s dominant Internet platforms: (A) reporting that COVID may have originated in a laboratory in Wuhan, China; (B) reporting that the COVID vaccines do not prevent infection; (C) reporting that vaccinated persons can transmit COVID to others; and (D) reporting that compromising emails and videos were found on a laptop belonging to Hunter Biden.”
“All of the above was and is either true or, at a minimum, well within the ambit of legitimate reporting,” according to the lawsuit.
“The TNI did not only prevent Internet users from making these claims; it shut down online news publishers who simply reported that such claims were being made by potentially credible sources, such as scientists and physicians.”
“Thus,” the lawsuit states, “TNI members not only suppressed competition in the online news market but deprived the public of important information on matters of the highest public concern.”
The lawsuit also alleges TNI members often knowingly removed or otherwise blocked content they knew was not false.
At a March 2022 TNI presentation, “Big Tech’s Part in the Fight,” a senior Facebook information moderation officer said “it was a mistake to think of ‘misinformation’ as consisting solely of ‘false claims,’ because a great deal of it is ‘not provably false.’”
Nevertheless, he “further emphasized the importance not only of targeting specific items of misinformation, but of ‘banning’ the sources thereof,” and stated that “Facebook works together with its ‘industry partners’ to combat ‘disinformation.’”
In emails revealed Jan. 6 as part of an ongoing lawsuit against President Biden and members of his administration alleging censorship, a memo by Meta (Facebook’s parent company) revealed efforts to reduce the visibility of CHD content, while a White House email asked for one of Kennedy’s COVID-19-related tweets to be “removed ASAP.”
The lawsuit contained a comprehensive list of “claims deemed ‘misinformation’ by one or more TNI members,” including:

“Moreover,” states the lawsuit, TNI members “publicly declared — categorically, as if it were established fact — that the lab-leak hypothesis of COVID’s origins was ‘false.’”
The lawsuit also alleges “TNI members confer and coordinate in making their censorship decisions,” noting that “TNI members’ parallel treatment of prohibited claims further evidences concerted action” by “engaging in strikingly similar viewpoint-based censorship of plausible, legitimate news reporting relating to COVID-19.”
Moreover, according to the lawsuit, “the temporal proximity” of these sanctions, including shadow bans and outright suspensions and bans, “plausibly suggests inter-firm communication and concerted action.”
The lawsuit notes that the recently released “Twitter files” provide further indication of such inter-firm communication and coordination, including “regular meetings” and “standing weekly call[s]” to “discuss censorship policies and decisions.”
According to the lawsuit, YouTube de-platformed Mercola on Sept. 29, 2021. Mercola learned about this action via a Washington Post article published that morning, although YouTube did not inform him of the decision until after the article was published.
In the lawsuit, all plaintiffs allege similar coordinated efforts at censoring their content and their social media accounts and subsequent financial damages due to being de-platformed and sustaining significant reductions to their audience size.
For instance, providing evidence of coordination ranging beyond the TNI’s members and partners, the lawsuit alleges that online payment platforms and processors such as PayPal and Stripe banned multiple plaintiffs, including CHD and Creative Destruction Media, within the same “temporal proximity” as their social media bans.
As summarized by Holland, TNI acts as “a global media monopoly”:
“They couch what they’re doing, their conspiracy to suppress independent media, i.e. the voices of dissent about election information and COVID information, as a ‘need to preserve the trust of the people’ and ‘upgrade the trust.’
“By censoring independent voices, what they’re doing is economic suppression. Antitrust is against trusts, it’s against monopolies, and what the TNI has done is essentially create a global media monopoly in the English language.”