Damar Hamlin is officially Tiffany Dover the sequel after sloppy propaganda display during Bengals at Bills game Wed Jan 25, 2023 12:35 am 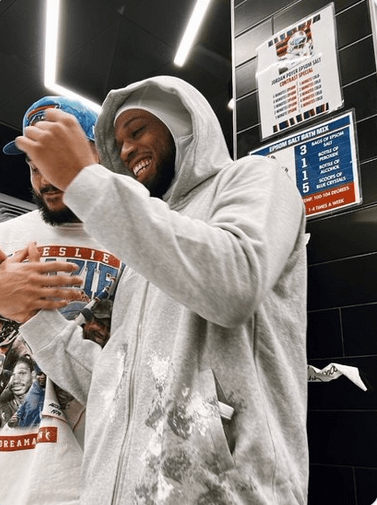 BUFFALO, NEW YORK — The foregoing photo is the clearest one we’ve seen of Mr. Damar Hamlin since the infamous Monday Night Football game on January 2, 2023. He is of course the Buffalo Bills free safety who collapsed on the field due to cardiac arrest during said game.
The photo was part of an Instagram story posted by Mr. Hamlin’s teammate, linebacker Matthew Milano, on January 15. This blogger learned from influencer Whitney Rife in 2021 that IG stories disappear after 24 hours. Thus said photo no longer exists anywhere on Mr. Milano’s IG page. The instant critical thinker questions related to the photo are:

As it relates to the last bullet point, Mr. Hamlin is wearing a cold weather football cap in the “January 15, 2023” photo. 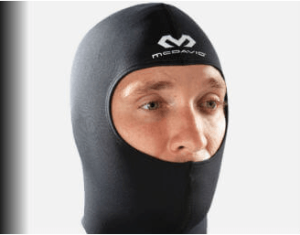 These are specifically designed to keep the head, ears and face warm, while fitting snugly under the helmet. Mr. Hamlin wearing this indicates that he just finished playing in a cold-weather game. It makes no sense for a man recovering from cardiac arrest to show up to the team’s locker room wearing this.
The COVID Blog

has followed this story closely because, as stated several times, “it will take an NFL or NBA player collapsing and dying on the field/court for the American masses to take notice of what’s happening.” That has now played itself out in real life. Monopolized social and legacy/mainstream media have dictated all social and political narratives since the turn of the millennium. Big Pharma is the primary mainstream media puppet master.

It was vital for the powers-that-be (“TPTB”) to coverup the Tiffany Dover story at the beginning of the “vaccine rollout.” It is/was equally imperative for them to take control of the Damar Hamlin situation. 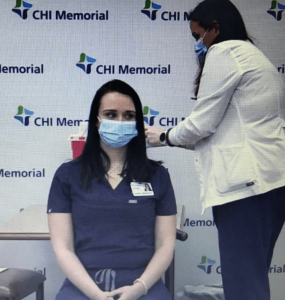 The most notorious “vaccination” of The Great Reset – Tiffany Dover, December 17, 2020.
TPTB rely on mass gullibility and stupidity to execute these ridiculous coverups that are always worse than the actual crimes. But 80% of Americans have received at least one “COVID shot.” They are forced to have faith in these propaganda stories to control their growing angst as the truth about the lethal injections is more freely flowing in 2023.
The foregoing social conditions make the lies easier to tell since the vast majority of the population wants and needs to hear said lies for their own psychological and otherwise well-being. This entire vaccine genocide would have been nipped in the bud before it got started if TPTB failed to quickly take control of what would have been a complete disaster at the very beginning of this agenda.


The experimental Pfizer mRNA injections were first made available in the U.S. on December 11, 2020. TPTB thought it would be cute to televise a bunch of nurses at CHI Memorial Hospital in Chattanooga, Tennessee receiving the injections on December 17, 2020. The infamous Tiffany Dover case was born that day, after she collapsed just minutes after receiving the injection on live television.
Ms. Dover reappeared on camera a few minutes later, and said she always passes out…that it’s normal for her to pass out. That’s hard for critical thinkers to believe, considering she was an ER nurse and sees blood, vomit and other nastiness all the time. Ms. Dover has not been seen or heard from since that time, other than a not-so-convincing doppelganger named Amber Lynn Honea Dietz. TPTB used Ms. Dietz as a lookalike a few days after Ms. Dover’s permanent disappearance.
TPTB were forced to cover this up. Someone dying right after receiving the beloved “vaccines” on live television days after the U.S. Food and Drug Administration (FDA) granted “emergency use authorization” for the shots, would have completely screwed up the most important phase of their sinister depopulation agenda. They even dispatched one of their cookie-cutter mainstream media puppets in 2022 to spoon-feed the sheep their very lazy, amateur, “official” coverup propaganda surrounding Ms. Dover.

Covering up the post-injection death of some previously-random nurse was fairly easy. It’s different when an NFL player collapses [and dies?] on Monday Night Football. TPTB should have to dig deep into their bag of tricks for this coverup, given Mr. Hamlin’s notoriety. But they are literally using all the same Tiffany Dover tactics for Damar Hamlin.

To recap, Mr. Hamlin collapsed on the field during the Monday Night Football game on January 2 in Cincinnati against the Bengals. The situation looked identical to numerous other cases of sudden death we’ve covered on this blog. TPTB have pushed the “miraculous recovery” narrative, and claim that Mr. Hamlin is alive and well today.
We published an update on Mr. Hamlin two weeks ago. Two of our many sources at the University of Cincinnati Medical Center, without collaboration or knowing that the other was in contact with us, reported very similar stories confirming that Mr. Hamlin was deceased; and that the TPTB are covering it up.
The NFL’s worst nightmare took place this past Sunday, when the Bills and Bengals faced off yet again, this time in a playoff game in Buffalo. The league had no choice but to further address the Damar Hamlin situation.
ESPN and several other mainstream media outlets posted the following video clip, allegedly of Mr. Hamlin entering Highmark Stadium in Buffalo prior to kickoff on Sunday. “Mr. Hamlin” is the one surrounded by security, and covered from head-to-toe, complete with a mask and sunglasses.

Here is a closeup of the mystery masked man. 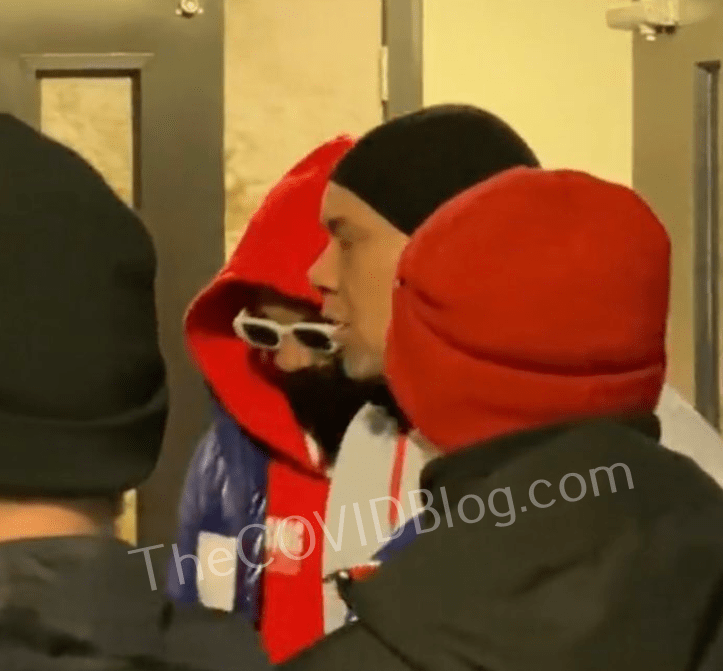 The NFL and CBS Sports then showed another “video of Damar Hamlin,” this time through a snowstorm. It is a blurry image of some guy in the box seats.

Here is a photo from a different angle of the foregoing video. 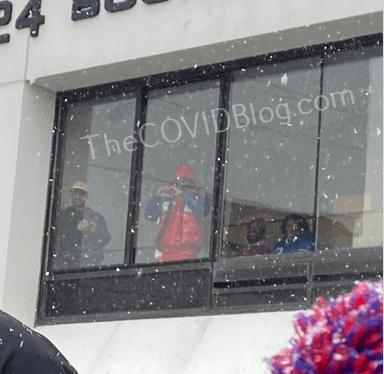 The following image is “Damar Hamlin” in his box suite, right before CBS panned to the blurry, snowy video above. Again, he is still covered head-to-toe, complete with mask. 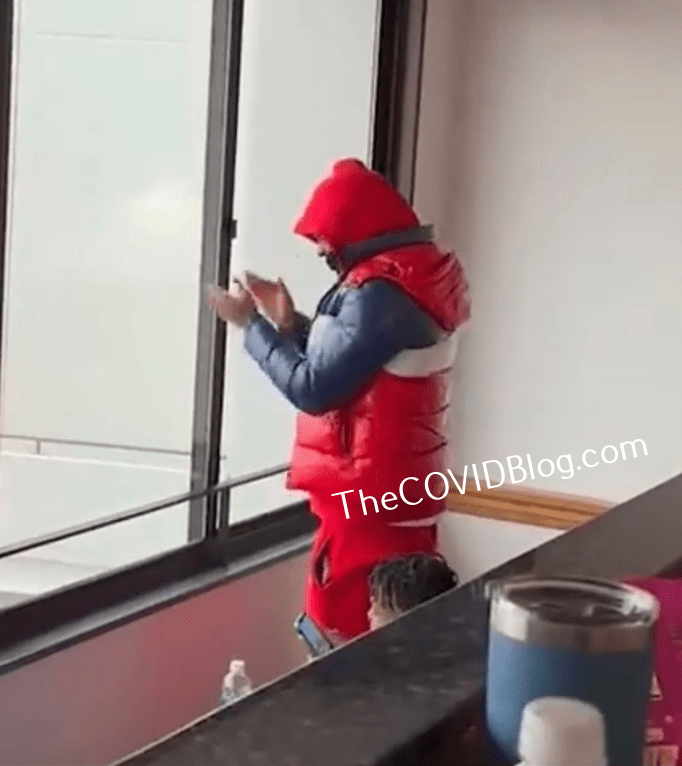 It gets worse. Before the game, the Damar Hamlin Twitter account posted an old video of him running onto the football field in full Bills uniform. It’s an obvious propaganda tactic to lull lazy, non-football fans to sleep. They are likely to believe that Mr. Hamlin actually played in the game on Sunday because of this video. 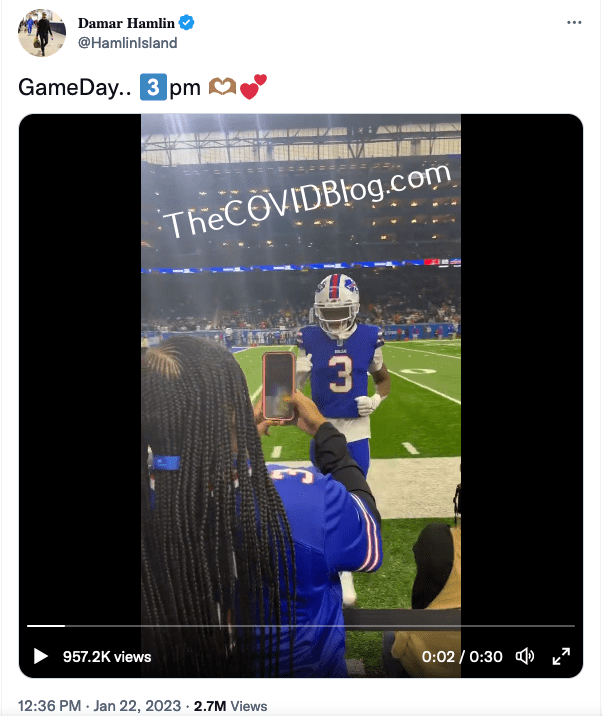 The Hamlin Twitter account posted the following photo of New York vaxx zealot Governor Kathy Hochul, holding a phone to her ear, on January 19. She is “talking to Damar Hamlin.” 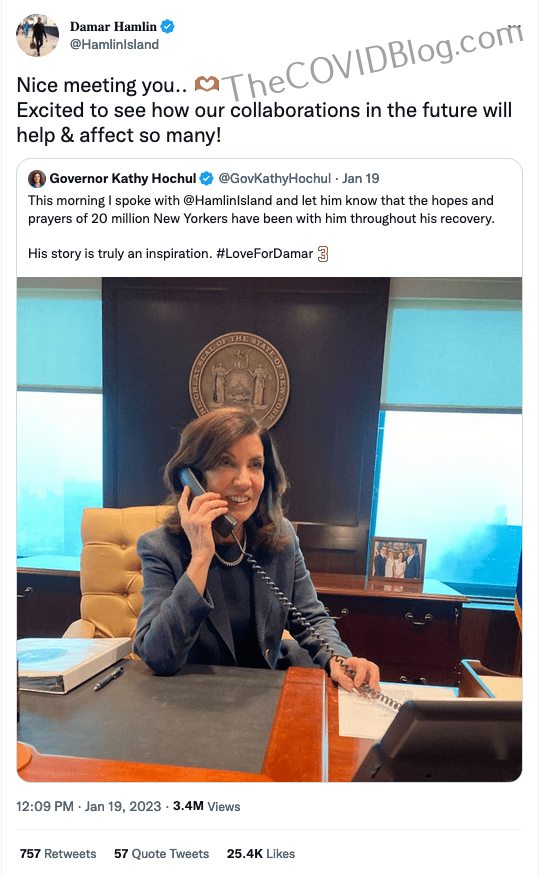 » BREAKING: Buffalo Bills safety Damar Hamlin collapsed on the field - Will this be the tipping point?
» Doctors’ Mum On Cause Of Damar Hamlin’s Heart Attack
» Fauci Pulled From Retirement To Control Narrative on Damar Hamlin
» Damar Hamlin Released From Hospital One Week After On-Field Cardiac Arrest
» Where is Tiffany Dover?