OUT OF MIND » THE INSANITY OF REALITY » FINANCIAL COLLAPSE » Gold Bank Run Accelerating…Now the Swiss Want Their Gold Back- All 1040 Tons of It!

Gold Bank Run Accelerating…Now the Swiss Want Their Gold Back- All 1040 Tons of It!

To get the larger picture, scroll to the bottom of this
article, and work your way back through the weeks to see what has been
going on. You bet I think we’re in the end game, because years ago I
read the Fed had cleaned out Fort Knox and replaced the gold with
tungsten bars simply covered in gold. The story was laughed at back
then, but for some reason I believed it. ~J 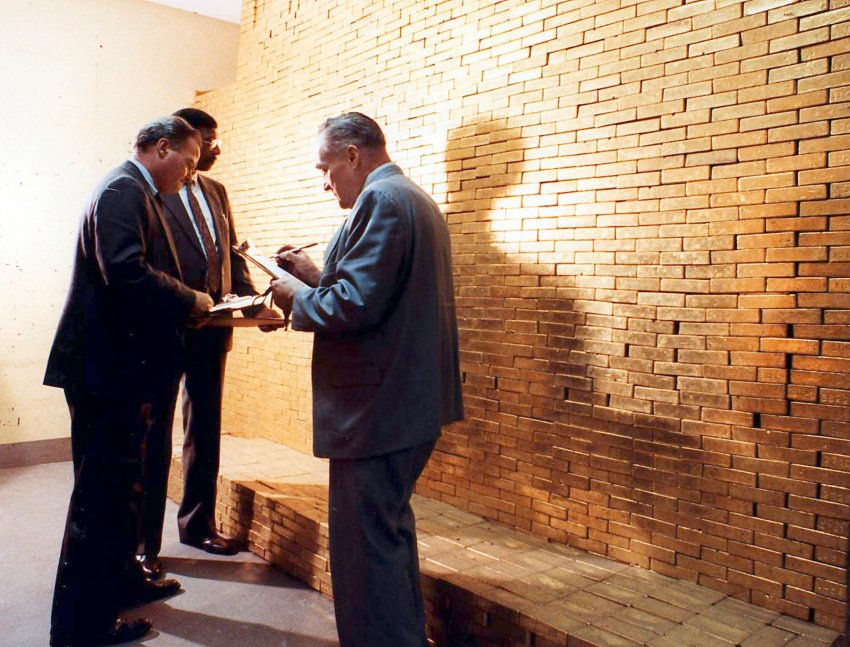 With last
week’s announcement by the Bundesbank of the repatriation of 674 tons
of German gold from Paris and NY over the next 7 years, we predicted that an avalanche of gold repatriation requests would soon be made to the BOE and the NYFed.

It appears that Switzerland may be next to the game, much to the dismay of the SNB. The Swiss gold initiative, an initiative to Secure the Swiss National Bank’s Gold Reserves, launched in March 2012 by four members of the Swiss parliament, has grown to 90,000 supporters.

Once 100,000 supporters are achieved, the Swiss Parliament must take up the referendum.

The initiative asserts that the Swiss people should have a right to vote on 3 things, none of which will please the banking cartel:
Click here for more on the Swiss Gold Initiative.

Jim
Sinclair: German Gold Repatriation is the Most Significant Gold Event
in 50 Years, Beginning of the End of the US Dollar As Reserve Currency 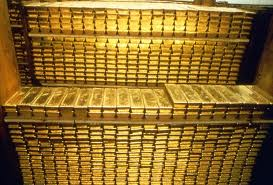 Legendary gold trader Jim Sinclair has sent an email alert to subscribers today regarding last night’s news that Germany will begin repatriating it’s gold held on deposit at the NY Fed back to the Bundesbank, as well as all 374 tons held at the Bank of France.

Sinclair states that history will look back on this salvo
fired across US war financing as being the beginning of the end of the
US dollar as the reserve currency of choice, and that under
normal circumstances, no major central bank would insult another major
central bank in the way that the Bundesbank just has.

Sinclair states that the Bundesbank repatriating its gold
reserves is the most significant event in the gold market since Charles
De Gaulle called the US hand that it would stand by convertibility, and that gold is headed to $2111 in the near future in the wake of the Bundesbank’s actions.

Jim Willie: The Coming Isolation of the US Dollar 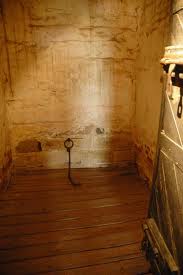 The typical human reaction to any infection, vermin, danger, or
toxicity is to stand back, to isolate the agent, to trap it, to prevent
its further spread or release, then to remove it in a safe secure way if
possible using trained professionals. Eventually decisions must be made
on the level of acceptable risk on the removal, like what is willing to
be lost or damaged or killed in the process. Risk analysis, cost
trade-offs, and minimization decisions must be evaluated and executed.

The toxic agent in global trade, global banking, and global bond market is the USDollar.

In 2009, the Jackass began making a certain firm point. Those nations
that depart from the entire USDollar system early will be the leading
nations in the next chapter, with stronger foundations, richer solvency,
emerging economies, healthier financial markets, efficient credit
engines, growing wealth, stronger political helm activity, and better
functioning systems generally. Imagine a contaminated blood system that
infects, corrupts, and destroys all interior organs from the spread of
the toxin.

Those nations that stick with the crumbling USDollar system stubbornly will find a horrible fate with devastating effects,
rampant economic damage, broken financial markets, sputtering credit
engines, tremendous loss of wealth, wrecked supply lines, poverty
spreading like wildfire, ruined political structures, social disorder,
isolation from the rest of the world, and a fast ticket to the Third
World. That is EXACTLY what is happening in the last several months. A
division has begun, as the East has been busily installing the next
generation platforms, as related to trade, banking, and commercial
integration. 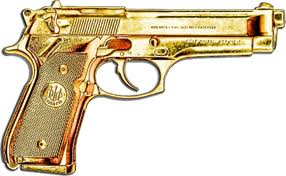 The global financial crisis is better described as a global
monetary war to defend the toxic USDollar, whose sunset can be seen. In
the last 12 to 18 months, the monetary war has again morphed, this time
into a far more serious and financially violent global Gold War.
Nations are fast realizing that their only true liquid assets of value
are their gold reserves, and even they have been tampered with or stolen
in a vast re-hypothecation scheme.

The Gold War is on, having moved to a higher gear, but nowhere near a climax gear. The true value of gold is being realized. The
strength of gold during insolvency crisis is being observed. The
resistance and rescue from the plague of insolvency is being made clear
on a global stage.

The new important part of the Gold War comes with the
Allocated Gold Account scandal which will dwarf the LIBOR and MFGlobal
scandals. The demands for repatriated gold accounts, primarily
from the criminal bank sectors in London and New York, have amplified.
Germany has finally joined with demands for gold repatriation. The
demands will continue to grow even as tampered gold bars add to the
motivation to repatriate. If only Chavez of Venezuela knew that he was
to start a global trend to call gold home, in a Gran Aletazo de
Mariposas. The grand butterfly flapping has caused a whirlwind
that will turn into a tornado to wreck the central banks in a final
death blow. 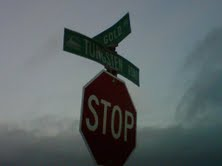 An Austrian banking source has reportedly claimed that Deutsche Bank ‘fulfilled’ one gold repatriation in recent years with the help of Tungsten and further claims that the tungsten salted gold bars have turned up in Asia.

In 2009, Rob
Kirby first uncovered detailed information regarding a massive plot to
replace 400 oz good delivery gold bars with highly sophisticated
tungsten filled fakes- and even provided evidence that the bars had been swapped with the gold held at Fort Knox.

Widely scoffed at by the financial media in 2009, Kirby
appears to have released a Pulitzer worthy story nearly half a decade
ahead of its time, as if the Austrian source’s claims are true and
Deutsche Bank has in fact fulfilled a recent gold repatriation request
with gold plated tungsten, the ramifications are that not only is every
single claim made by GATA regarding gold and silver manipulation are
100% accurate, but that real, physical metal is now in desperately short
supply and the jig is nearly up for the bullion bank cartel.

-The battle is on for delivery and verification for official gold accounts
-Evidence grows that much of it is gone, and when demanded, replaced with urgency
-It is soon to transform into a global gold war
-The German Govt gold demand to the London and NY City bankers represents a big escalation in the gold war
-The central bank coordinated QE to Infinity has brought questions of gold account location and integrity
-The Allocated Gold Account scandal is a natural event to follow the LIBOR banker scandal
-QE3 will assure a gold rise past the $2000 mark, but the new scandal will take the gold price to $5000
-The powerful gold factors are aligned and in place, led by permanent ZIRP and unlimited QE


Click here for more from Jim Willie on the coming global gold war. 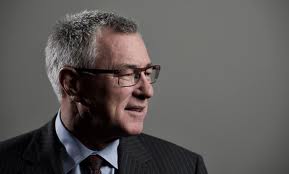 Bloomberg has released a MUST WATCH interview with
our good friend Eric Sprott of Sprott Asset Management discussing his
thoughts on gold. While unable to specifically discuss silver due to the
current PSLV follow-on, Sprott simply destroyed the MSM pundits’
anti-gold arguments, stating that gold has beat the Dickens out of every other asset class over the last 12 years, and questioned
whether the Western Central Banks have any physical gold left in the
vaults, as the gold listed on their balance sheets includes gold
receivables, which has been leased out and is gone for good. 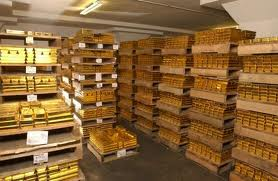 The Tylers at ZH have discovered a 1968 memo from the BOE
archives sent by the Bank of England to the Federal Reserve revealing
that the Fed sent at least 172 bad delivery gold bars to London in the
late 1960′s for safekeeping for the German Bundesbank as repayment for
swaps.

The memo reveals that London assayers discovered that the Fed
through Johnson Matthey sent the Deutsche Bundesbank 172 ”bad delivery”
gold bars, and the ”out-turn of the re-melting showed a loss in fine ounces terms four times greater than the gross weight loss”.

Click here for more on the Fed sending the Bundesbank ”bad delivery gold”.

Calls
for Germany to repatriate its 1,536 tons of gold reserves held at the
NY Fed are intensifying as Der Spiegel reportsthe Federal Reserve has
refused to allow German inspectors to even view the country’s massive
gold reserves “in the interest of security and of the control process“.

We have stated repeatedly that with repatriation and/or audit
requests completed or in progress by Venezuela, Germany, Switzerland,
and the Netherlands, The BOE and the Fed suddenly find themselves in a
heap of trouble as the situation (and confidence that the Central banks
actually still hold the tungsten gold reserves on deposit) is rapidly deteriorating.

Click here for more on the Fed’s non-compliance with German requests to view/inspect their own gold,

-The battle is on for delivery and verification for official gold accounts
-Evidence grows that much of it is gone, and when demanded, replaced with urgency
-It is soon to transform into a global gold war
-The German Govt gold demand to the London and NY City bankers represents a big escalation in the gold war
-The central bank coordinated QE to Infinity has brought questions of gold account location and integrity
-The Allocated Gold Account scandal is a natural event to follow the LIBOR banker scandal
-QE3 will assure a gold rise past the $2000 mark, but the new scandal will take the gold price to $5000
-The powerful gold factors are aligned and in place, led by permanent ZIRP and unlimited QE

OUT OF MIND » THE INSANITY OF REALITY » FINANCIAL COLLAPSE » Gold Bank Run Accelerating…Now the Swiss Want Their Gold Back- All 1040 Tons of It!