The Power of Ge is calling

So … I took this as a signal to re-post it once again …. and also that the sacred altar is calling as well ..

`When she ( Ge) comes , she will feel like an earthquake, and
you will know you are no longer a galactic virgin when this
happens.Once you have attained this, she will be able to draw you into
her mind whenever she wants to. You will know when to seek your alter.’

The Power of `Ge’


Posted on March 30, 2011 by Eileen
Recently I have been very strongly guided to practice the meditation
of the 7 directions in which one connects with the elements, all that is
above and below as well as the heart centre. ( http://www.solara.org.uk/meditation.aspx?element=255 )

When I first began to practice this meditation a few years ago in New
Zealand it really strengthened my connection to Gaia … along with
expanding my awareness to the Galactic Centre.

Within both Gaia’s iron core and the Galactic Centre there is an energy or tone which is called `Ge.’

Here is some information which I found about `Ge’

Research suggests that humans have become energetically separated
from Source and unity consciousness because of alterations to the
vibrational fields of language, color, music and timekeeping that once
electromagnetically attuned us with Galactic Center. The impact of these
changes on human consciousness has been immense, literally trapping us
in duality.

The Language of the Birds is a vowel-only phonetic code that is
woven through many languages. Genetic and linguistic research indicates
that the five vowels correspond to the five letters used to represent
DNA and RNA: A, C, T, G and U. Initiates of the Language of the Birds
who are able to speak or tone these vowels in certain ways know that
these sounds permanently activate the DNA of all those who are able and
willing to hear these sounds. Perhaps this is the true esoteric meaning
of the Biblical phrase “for those with ears to hear.”

Sound healer Jonathan Goldman, who writes about this ancient
“harmonic language” in Healing Sounds, believes that it once allowed
humans to communicate telepathically with all of nature’s creations. He
theorizes that the Language of the Birds used sound to transmit
information, and may be similar to sounds used by dolphins to transmit
three-dimensional holographic thought-forms.

Musical sounds or tones were originally attuned to Source and are
believed to be the frequencies used by God to create the cosmos in six
days. Sacred chants such as the Gregorian contained notes that connected
humanity to Source and, as a result, increased health and longevity.
Current musical scales lack these six primary frequencies, known
together as the Solfeggio Scale, which was only recently rediscovered.
One of the Solfeggio notes, known as “Mi,” is the exact frequency used
by genetic engineers to repair DNA.

Color, which as an aspect of light is ultimately an expression of
sound, results from combining three primary hues. Today these are red,
blue and yellow: the foundation for all modern color schemes. When
combined, red, blue and yellow produce a muddy brown. The original
primary colors were actually red, green and violet, which combine to
produce brilliant white light when projected on a screen. The impact of
this dubious change on human consciousness is immense, as it effectively
“dumbs down” our visual perception.

Prior to the rise of the Roman Empire, the first hour of the day
began at 6 p.m. rather than at midnight, as shown in this figure. 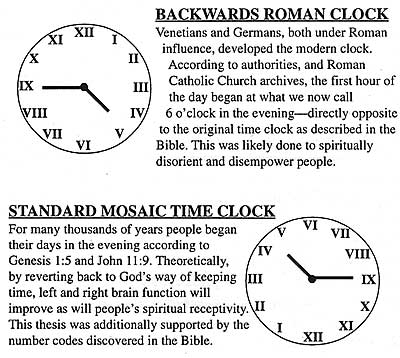 This change reversed the natural charting of time by the brain
and decreased the synergistic functioning of the right and left brains.
This not only “dumbed down” humanity but blocked the whole-brain
integration that is a critical step in human evolution. Whole-brain
integration is one of the major traits of geniuses and self-actualized
individuals.

You might think of the original or Mosaic clock as going
“tick-tock” and the backwards Roman clock as going “tock-tick.” This
alteration in timekeeping literally entrains the brain to vibrational
frequencies that prevent people from electromagnetically attuning to the
circadian forces of Earth.

Even the calendar was changed in an effort to disempower the
masses. Originally based on lunar or moon cycles, the calendar once
contained 13 months and kept humanity attuned to natural rhythms through
moon cycles and sun cycles such as solstices and equinoxes. The
implementation of today’s Gregorian Calendar in 1582 effectively attuned
humanity to technology rather than nature, as it focused attention on
clock-based time rather than solar and lunar movements.

Many indigenous traditions of Mesoamerica believe that Tula (
Galactic Centre)emits a frequency or tone known as Ge that not only
heals the body/mind/spirit but provides immortality. Some believe that
the tone of Ge is inherent in the vibrational frequencies of the
Language of the Birds, the original Gregorian Chants, the Solfeggio
Scale and even primary color system that creates white light. These
frequencies form the basis for all disciplines such as alchemy and
esoteric religions that claim to lead people towards illumination or
enlightenment.

It appears that the spiritual practices used in the ancient
mystery schools of Egypt and Greece employed a variety of these
vibrational tools to attune people’s DNA to Source. This caused the DNA
to ring, sing or vibrate so that it resonated with the tone of “Ge”—the
frequency of Galactic Center. This attunement activated a San Graal or
Song Grail—a “love song in the blood”—creating a rainbow bridge that
synchronized an initiate’s consciousness with Source. This love song
energetically united Heaven (Galactic Center) with Earth (initiates),
opening human hearts and pumping crystallized “Ge”-tuned blood through
their bodies. From this perspective, “Ge-sus” is a Master Being sent
from Tula or Galactic Center to help humanity attune its DNA to the
frequency of Ge so that we can return to Source.

While reading the Pleidian Agenda the idea of setting up an alter to
the 4 directions features constantly throughout the book. It is seen as a
way of connecting to `Ge’. When you align with `Ge’ she will also send
you ideas and inspiration.

I laughed when I was reading about this in this book as I once
experienced an earthquake while connecting to Gaia’s iron core crystal
in which `Ge’ resides. This is what I found in this book – `When she (
Ge) comes , she will feel like an earthquake, and you will know you are
no longer a galactic virgin when this happens. Once you have attained
this, she will be able to draw you into her mind whenever she wants to.
You will know when to seek your alter.’

I found this to be very interesting.

It would appear that I am no longer a `galactic virgin’

This need to seek your alter …. the alter has been calling me over
the last few weeks and I am feeling that it is most important to connect
in this way at present.

There is strong energy and tones emitting from the `Ge’ in the
earth’s iron core crystal and also in the Galactic Centre .. and by
connecting with both , pulling down the prana from the Galactic Centre
and up from the core of Gaia into our hearts is a very powerful
connection.

When one adds to this the connections to the 4 directions which then
link around Gaia you are effectively centring yourself in every
direction so that you can receive information through all of these
sources … it feels to be very important to maintain these connections
during this time.

By connecting in this way and aligning with the power of `Ge’ while
centring all this energy in your heart I feel is really important at
this time when we are heading towards a heart-based way of BEing… not
only that but by attuning ourselves to the tone of `Ge’ within the
Galactic Centre and with Gaia herself we can retune ourselves to the
tone of Source.