OUT OF MIND » THE INSANITY OF REALITY » GOVERNMENTS & THE NEW WORLD ORDER » Its Official: Obama Impeachment Starts Here

U.S. Federal Court hits President Barack Hussein Obama
with three charges of abuse of office. The charges presented are
detailed and damning. The indictments assert that President Obama “acted
as a dictator” to exceed his powers of office to appoint officials
behind the back of Congress during a recess period. 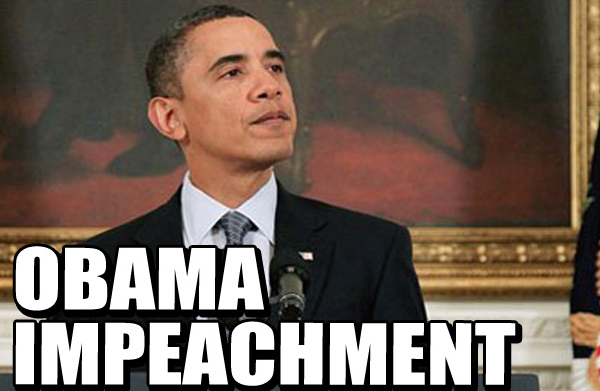 In a staggering announcement an Associated Press report declared: “President Barack Obama
violated the Constitution when he bypassed the Senate last year to
appoint three members of the National Labor Relations Board, a federal
appeals court ruled Friday.”

Mr. Lyndon Larouche,
a well-connected journalist and political activist characterized the
court’s assessment as “probably the greatest indictment ever seen on a
standing president throughout history.” White House press secretary Jay Carney
reacted strongly against the charges declaring, “we believe that the
president’s recess appointments are constitutionally sound.” However,
the federal court seems to disagree having put in place ” a list of charges presented as conclusions” according to
Larouche. The court appears to take the view that no such recess was in
place. As such, the president was in violation of Section 5 of Article 1
of the Constitution that stipulates that a president cannot make
appointments without the consent of the Senate.

The failed Obama gambit had hoped to apply
the section of the Constitution that reads: “The President shall have
Power to fill up all Vacancies that may happen during the Recess of the
Senate, by granting Commissions which shall expire at the End of their
next Session.”

The Washington Post
reports on the seriousness of this abuse of office, “is more than an
unconstitutional attempt to circumvent the Senate’s advise-and-consent
role. It is a breathtaking violation of the separation of powers and the
duty of comity that the executive owes to Congress.”

Crucially, no other president in history
has ever tried to force through such alleged “ recess appointments”
while Congress is still in session. The offenses occurred last year when
President Obama opted to bypass Congress and unilaterally appoint three people to seats on the National Labor Relations Board . He also made Richard Cordray (pictured with Obama) head of the new Consumer Financial Protection Bureau (after the Senate blocked action on his nomination). Cordray’s appointment, made on the same date, has been challenged in a separate court case.

Lyndon Larouche has characterized the
events as probably the worst violation by any sitting president trying
to use a “procedural loophole.” Jubilant Republicans are already
looking to set in motion impeachment proceedings. Larouche, who studied
the court indictments, believes Obama’s offenses are “far graver” than
those that led to the impeachment and removal from office of disgraced
Republican president, Richard Nixon, after the Watergate scandal.

Posts : 2620
Join date : 2012-01-17
Age : 74
Location : NH
Well though I agree that things that have been done by the current administration are certainly grounds for a lynch mob, in reality that in itself is not the root of the problem, nor the necessary remedy.
The 'Behind the Scenes' puppet masters/power brokers/big money powers, are what has to be delt with. Unfortunately we don't get to Vote for them. Since it is a 'Given', that these PTB back and support both sides of any particular conflict, argument, situation, this being the only means of staying in control, leads to only one possible solution. They ALL have to go ! They have to be replaced by those who have never held political office or are 'legal' professionals, and those who have NO personal associations with any Special interests...
No Idea who that may be, but I'm sure it is possible. jmho

OUT OF MIND » THE INSANITY OF REALITY » GOVERNMENTS & THE NEW WORLD ORDER » Its Official: Obama Impeachment Starts Here