OUT OF MIND » CONSPIRACY THEORIES & ENDURING MYSTERIES » ILLUMINATI AGENDA & WORLD DOMINATION » Was Pope Benedict Fired By The Knights of Malta?

Was Pope Benedict Fired By The Knights of Malta?

Sometimes they’re “fired” by God, who has been known to dismiss
them from this mortal coil. On other occasions, Satan – through one of
his secret societies infesting the Vatican – slips the Pontiff one of
those patented papal poisons.

But Popes do not resign because they’re getting old. If you believe
that Papal Bull, I have a “we killed Bin Laden and threw him in the
ocean” story to sell you.

Noted Catholic scholar Michael Jones, editor of Culture Wars
magazine, could not contain himself when, in the lobby of Tehran’s
Parsian Hotel, he was confronted with the news. “But…but that’s
unprecedented!” Jones shouted.

Dr. Robert Moynihan, editor of Inside the Vatican magazine, is no
conspiracy theorist. He’s THE quasi-official Vatican-embedded journalist
and commentator.

So when Moynihan let slip a soupçon of skepticism about the “resigned
due to old age” story, my ears pricked up and my hair stood on end.
Moynihan points out in his latest journalistic encyclical that the Pope
sure didn’t look like he needed to resign for health reasons: “I saw the
Pope twice this week, once at a concert (on Monday evening, where I was
sitting about 20 yards away from him) and at his General Audience on
Wednesday. For a man of 85, he looked well, though he did seem tired.”

Why, pray tell, did he “seem tired”? What, precisely, was weighing on his infallible mind?

On Saturday, I intended (sic) a funeral Mass in St.
Peter’s Basilica for a cardinal who died last week (Cardinal Giovanni
Cheli). Pope Benedict was scheduled to attend, but at the very last
minute, he canceled his attendance. This was an indication to me already
Saturday evening that he was unusually tired (he had spent several hours that monring (sic) with the Order of the Knights of Malta). Normally he would have been present at a cardinal’s funeral.

Monihan’s typo “monring” (“my ring”) is suggestive. The Pope’s office
is symbolized by the Ring of the Fisherman, which is ceremonially
transferred when the papacy changes hands. Wikipedia, the Zionist
authority on everything, explains:

During the ceremony of a Papal Coronation or Papal
Inauguration, the Dean of the College of Cardinals slips the ring on the
third finger of the new Pope’s right hand. Upon a papal death, the ring
was ceremonially broken in the presence of other cardinals by the
Camerlengo, in order to prevent the sealing of backdated, forged
documents during the interregnum, or sede vacante.

What a scurrilous bunch those papal hangers-on must be!

Moynihan’s Freudian slip occurs in the middle of the sentence:

This was an indication to me already Saturday evening that he was
unusually tired (he had spent several hours that monring (sic) with the
Order of the Knights of Malta).

So THAT’S what was weighing so heavily on Pope Benedict: Spending
several hours that morning with the Knights of Malta. The meeting
exhausted him. So he resigned.

Somehow I don’t think it was just the exhaustion.

What did the Knights of Malta tell the Pope that caused His Holiness to take the “unprecedented” step of stepping down?

Was it a simple “you’re fired”?

The Knights of Malta are one of the most feared and whispered-about
secret societies in the world. Originally a gang of fanatical crusaders
dedicated to perpetrating genocide in the Holy Land, the Knights
apparently have not changed very much – at least if you believe Seymour
Hersh. He says the Knights of Malta are a key part of “how eight or nine
neoconservatives, radicals if you will, overthrew the American
government.” (Hersh is too polite to mention that they did it by way of
the 9/11 inside job.)

“[The] attitude (toward the Iraq invasion) was, ‘What’s
this? What are they all worried about, the politicians and the press,
they’re all worried about some looting?” Hersh was quoted as saying.
“Don’t they get it? We’re gonna change mosques into cathedrals. And when
we get all the oil, nobody’s gonna give a damn.’ That’s the attitude.
We’re gonna change mosques into cathedrals. That’s an attitude that
pervades, I’m here to say, a large percentage of the Joint Special
Operations Command [JSOC].”

Hersh further claimed that Gen. Stanley McChrystal, Vice Admiral
William McRaven and others in the JSOC were members of the “Knights of
Malta” and “Opus Dei,” two little known Catholic orders. 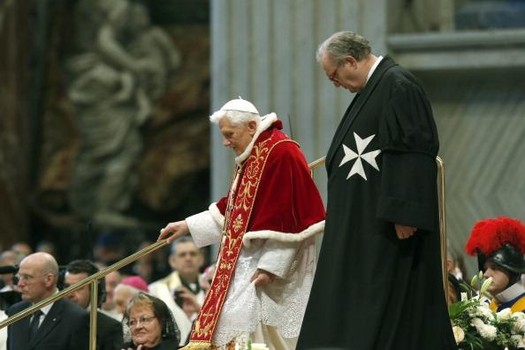 Prince and Grand Master of the Order of Malta, Fra Matthew Festing
stands near Pope Benedict XVI during a mass given to mark the 900th
anniversary of the official recognition of the Order of Malta by Pope
Pascal II.
“They do see what they’re doing — and this is not an atypical
attitude among some military — it’s a crusade, literally,” Hersh
reportedly continued. “They see themselves as the protectors of the
Christians. They’re protecting them from the Muslims [as in] the 13th
century. And this is their function.”

He added that members of these societies have developed a secret set
of insignias that represent “the whole notion that this is a culture
war” between religions.

Reading Hersh between the lines, it appears that the Knights of Malta
– a radical secret society penetrated by Freemasonic agents – helped
bring us 9/11 and the 9/11 wars. Have they forced Pope Benedict to
resign…or at least caused him so much worry (about what future plans?!)
that Benedict felt he had to flee the Vatican rather than shoulder
responsibility for whatever is coming?

Are the Knights of Malta and their Israeli friends about to ramp up
the clash of civilizations? Are they going to nuke an American city and
blame it on Iran? Are they planning some other dastardly act that
Benedict couldn’t stomach?

Or could the Pope’s resignation have been caused by some other intrigue involving the Knights of Malta?

At this point, we just don’t know. The choice of the next pope may reveal the hidden agenda.

Read the full article at: veteranstoday.com

OUT OF MIND » CONSPIRACY THEORIES & ENDURING MYSTERIES » ILLUMINATI AGENDA & WORLD DOMINATION » Was Pope Benedict Fired By The Knights of Malta?

» A MUST SEE VIDEO:"The Knights of Malta controlled by The diabolical Society of Jesus – NOW"
» Pope Francis Orders All Freemasons Expelled After Knights Of Malta Surround President Trump
» THE VATICANS NEW WORLD ORDER – THE KNIGHTS OF MALTA
» The Knights of Malta Rothschilds Guardians of The Vatican Treasury (vid.)
» HAHAHAHAHA Oh I can barely bring myself to post this crap: Pope Benedict Slams Capitalism, Economic Inequality