OUT OF MIND » THE INSANITY OF REALITY » ILLUMINATI AGENDA & WORLD DOMINATION » Breaking: The NEW Pope is a Paedophile, Too. Surprised?

Breaking: The NEW Pope is a Paedophile, Too. Surprised?


Breaking: The NEW Pope is a Paedophile, Too. Surprised? 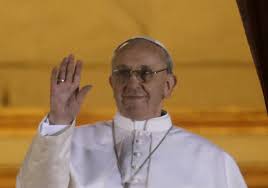 Waste no time! Looks like it’s “out of the frying pan, into the fire” where the papacy is concerned.

Does it look like the Illuminati is ready to give up? Nope. And they won’t. Let’s exercize those citizens’ rights to arrest these child rapists and lock them up where they can’t hurt any more children.

What are people going to say when they learn why so many
beautiful kids and babes go missing out of the blue? They’re going to be
very, very angry.

A Statement of the ITCCS Central Office – BrusselsMarch 13, 2013

A suspected criminal has been rapidly elected as the new Pontiff of
the Church of Rome in a record two day conclave, being the first Jesuit
in history to head the papacy.

Former Cardinal and Pope-elect “Francis I”, Jorge Mario Bergoglio, is
accused of helping kidnap opponents of Argentina’s military junta
during the 1970′s “Dirty War”, and of baby trafficking, by lawyers and
members of the Plaza de Mayo human rights group. (Los Angeles Times,
April 17, 2005, “Argentine Cardinal Named in Kidnapping Lawsuit”,Besides
his personal alleged criminality, Bergoglio – as a Jesuit – represents
the group most responsible for the centuries-old Crimes against Humanity
and Genocide for which the Jesuit Superior General was found guilty on
February 25, along with Joseph Ratzinger and other Vatican officials.The
Jesuit Order established the murderous Indian residential school system
in North America during the mid 19th century, and has led the
destruction and killing of millions of non-Catholics around the world
since its inception in the mid 16th century.

Under a secret oath administered to every member, the Jesuits are
authorized and encouraged to kill, torture or overthrow any opponent of
the Vatican and the Pope. ()

These facts, the Argentine allegations, and his complicity in the
global conspiracy against children enunciated in the canon law Crimen
Sollicitationas, makes the new Pope particularly liable for immediate
arrest and sentencing under international law and the Common Law Court
verdict of February 25, 2013.

The ITCCS understands that Jorge Mario Bergoglio’s election was a
quick and uncontested arrangement, as evident in its rapidity: in less
than two days, a record for papal elections.

Bergoglio’s election makes the guilt of the Vatican and its highest
officials for Crimes against Humanity all that more severe. The new
Pope, as the head fiduciary officer of the Vatican, Inc., assumes that
guilt and liability.

Accordingly, an application has been made by our Tribunal to these
courts for an International Citizens Arrest Warrant, to be issued
against the new Roman Pontiff, Jorge Mario Bergoglio – Pope Francis I,
for Crimes against Humanity and involvement in a global criminal
conspiracy based in Rome.

The ITCCS will soon be issuing more background evidence on the
genocidal purpose and actions of the Jesuit Order in relation to the
ongoing crimes we have documented; and of the evidence of Bergoglio’s
suspected crimes in Argentina.

Admin
Posts : 107515
Join date : 2012-01-04
Location : Woodstock Nation
Oddly enough I had put up a post regarding the baby trafficking a few weeks ago. So if the St Malachy prophesy hold true then this will be the reason for the bring down of the Vatican. Nest of vipers....

Posts : 8269
Join date : 2012-10-03
Age : 54
Location : Australia
Do you really think it will ever happen? I mean will we see it publicly? They have gotten away with so much shit over the hundreds of years and nothing is ever done why is now so different? Is it because of the people saying enough is enough? How much pull do those people have? I really hope this does happen, just have lots of questions as to how it will happen? :headscratching

Admin
Posts : 107515
Join date : 2012-01-04
Location : Woodstock Nation
Well we have a ring side seat to this moment in history nannee! It will happen. It was foretold and we are seeing all go down as told. The info of what this nest of vipers does is only beginning. Most will not believe it it will be so horrific. The video I put up about the baby trafficking was eye opening. Stealing babies from Moms and dads and telling them the child died. Then selling the wee one to families more acceptable!!! WTF!!! There is so much more wrong here than just the raping of innocent kids. It will all me out and the sheeple will have no choice but to get it finally.

Posts : 3470
Join date : 2012-02-10
Age : 66
Location : Florida
Not bad!! Thank you for asking- Wedding comming up the 30th of this month- Wife's daughter is getting married- Alot to do, and to still be finished, and will be in here off and on- Hope everything is well with everyone here-.... I guess from what I'm reading right now, the shit is coming down on the banana farmer, and all the rest of the morons in the Presidency- Feam camps are for them- Ym2oilman, brought it this a.m., and is from McHaffie- That is great, and about time! FINALLY!!!!!!

OUT OF MIND » THE INSANITY OF REALITY » ILLUMINATI AGENDA & WORLD DOMINATION » Breaking: The NEW Pope is a Paedophile, Too. Surprised?