OUT OF MIND » THE INSANITY OF REALITY » FINANCIAL COLLAPSE » Could gold be the next Libor scandal?

Could gold be the next Libor scandal? 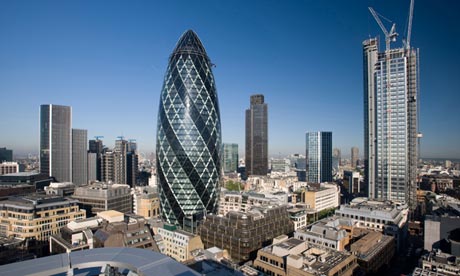 The fixing of the gold price in London dates back to September 1919. Photograph: Grant Smith/Alamy


London’s financial sector
was last night bracing itself for another official investigation into
alleged price-fixing following reports that a US regulator is
considering launching an inquiry into the City’s gold and silver markets.

The Commodity Futures Trading Commission is discussing whether the
daily setting of gold and silver prices in London is open to
manipulation, according to the Wall Street Journal, which stated that
the CFTC is examining whether prices are derived sufficiently
transparently.

The system of setting gold prices in London is unusual and involves a
twice-daily teleconference involving five banks – Barclays, Deutsche
Bank, HSBC, Bank of Nova Scotia and Société Générale – while silver is
set by the latter three. The price fixings are then used to determine
prices worldwide.

The news of the potential investigation comes after analysis of a
similarly unusual system – the process used to determine the London
interbank offered rate, known as Libor – uncovered manipulation and triggered multi-billion dollar fines against a group of banks.

Barclays was hit with a £290m fine last year, which resulted in the
departure of its chief executive Bob Diamond and chairman Marcus Agius.
Royal Bank of Scotland is paying fines of £390m for its role in
Libor-rigging.

The fixing of the gold price in London dates back to September 1919,
when the process involved NM Rothschild & Sons, Mocatta &
Goldsmid, Samuel Montagu & Co, Pixley & Abell and Sharps &
Wilkins.

At the start of each gold price-fixing, the chairman announces an
opening price to the other four members who relay this price to their
customers. Based on orders received from them, the banks declare
themselves as buyers or sellers at that price.

Provided there are both buyers and sellers at that price, members are then asked to state the number of bars they wish to trade.

Spokespeople for all five banks involved did not comment when contacted last night.

If at the opening price there are only buyers or only sellers, or if
the numbers of bars to be bought or sold does not balance, the price is
moved and the same procedure is followed until a balance is achieved.
The silver fix dates back to 1897.

Could gold be the next Libor scandal? | Business | The Guardian.

OUT OF MIND » THE INSANITY OF REALITY » FINANCIAL COLLAPSE » Could gold be the next Libor scandal?

» 83 Tons Of Fake Gold Bars: Gold Market Rocked By Massive China Counterfeiting Scandal
» Gold Bank Run Accelerating…Now the Swiss Want Their Gold Back- All 1040 Tons of It!
» Ukraine Admits Its Gold Is Gone: "There Is Almost No Gold Left In The Central Bank Vault"
» 10 Signs The Takedown Of Paper Gold Has Unleashed An Unprecedented Global Run On Physical Gold And Silver
» China will use gold and gold pricing to force global currency reset