OUT OF MIND » TRUTH IN CONSPIRACY THEORIES? » MISSING & CRASHED PLANES » Over 100 Dead in Indonesia After Military Plane Crashes in Residential Area

An Indonesian Air Force C-130 Hercules crashed today into a residential neighborhood in Medan, the country’s third largest city, killing more than 100 people on board, authorities said.
Officials have not reported the number of people who were killed on the ground, so the death toll is expected to rise. For now, Air force chief air marshal Agus Supriatna told ABC News, all 101 passengers and 12 crew members on board the plane died.
The plane crashed into houses and buildings, including a hotel, located near the Soewondo Air Force Base, where the plane took off. Adam Malik Hospital officials told the news site detik.com the hospital has received 36 bodies, with three victims saved.


None of the bodies has been identified and it's unclear how many of the victims are military personnel and how many are civilians, North Sumatra police chief Eko Hadi Sutedjo said.
Local station Metro TV has reported that 50 forensic doctors will be tasked with identifying the corpses.

Supriatna, the chief air marshal, said the pilot told the control tower that the plane needed to turn back because of engine trouble.
"The plane crashed while it was turning right to return to the airport," Supriatna said. 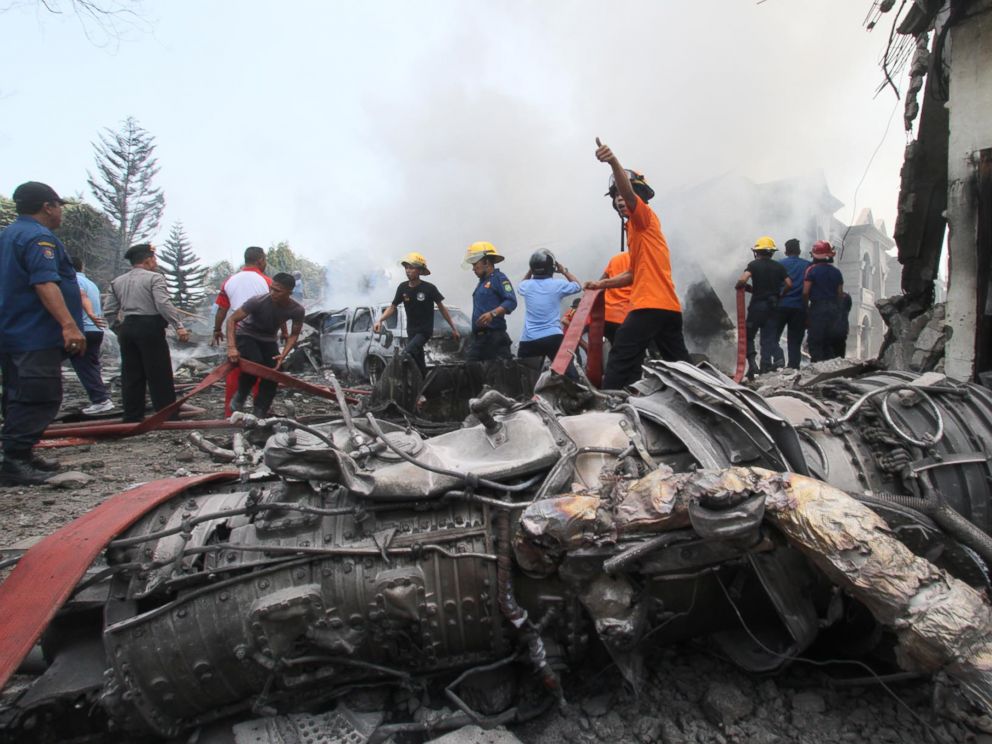 Witnesses reported an explosion from above the hotel, as well as a crash. Heavy smoke and fire could be seen in the area after the crash, as hundreds of people milled about nearby.
The C-130 Hercules was built in 1964 and has four engines. 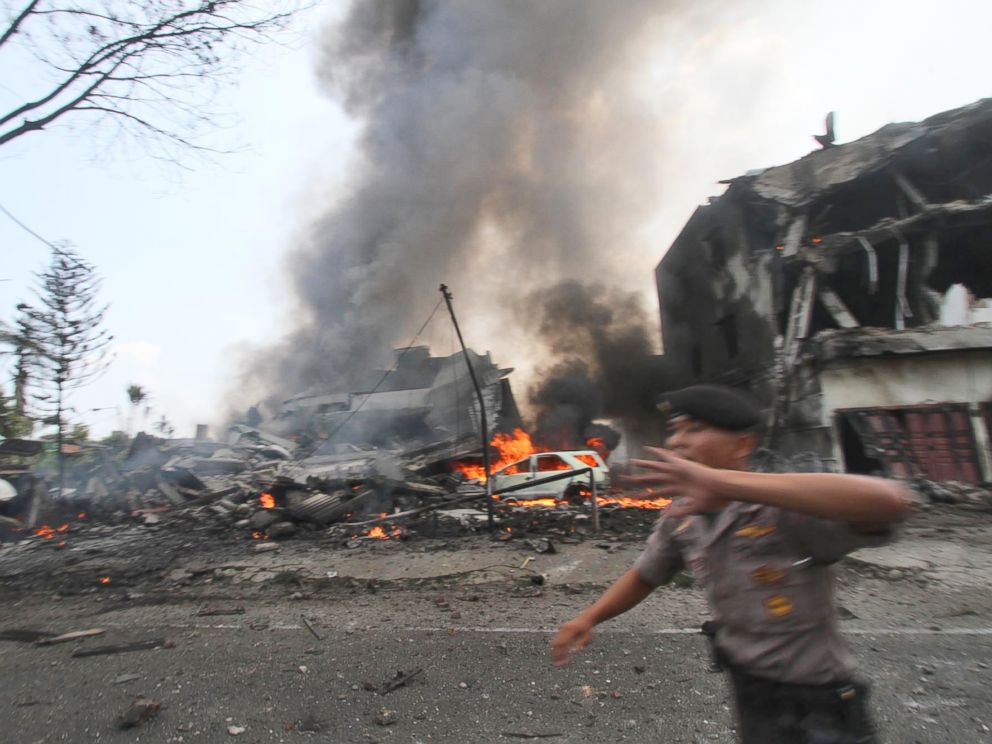 The tragedy marks the second plane crash in a residential section of Medan in the past decade, and the second major plane crash in the country in the past seven months.
Mandala Airlines Flight 091 – a Boeing 737 – crashed in a crowded residential area in Medan on Sept. 5, 2005, after taking off from Polonia International Airport, killing 100 people on board and another 49 people on the ground.
More recently, 162 people were killed when a commercial AirAsia jet crashed into the Java Sea in December.
Medan, with about 3.4 million people, is the third most populous city in Indonesia after the capital, Jakarta, and Surabaya.
ABC News' Ben Gittleson, Kirit Radia and The Associated Press contributed to this report.


MEDAN, Indonesia –  An Indonesian air force transport plane carrying military personnel and their families plowed into a residential neighborhood in the country's third-largest city of Medan shortly after takeoff on Tuesday, killing more than 70.
Rescue teams were using heavy machinery to remove the mangled wreckage of the C-130 Hercules as they searched the rubble of a building shattered by the impact. Witness accounts suggest the plane suffered an engine fire before crashing.
Air force spokesman Rear Marshal Dwi Badarmanto said 74 bodies have been recovered so far. He said about 30 of the dead have been identified and include air force personnel and members of their families.
Air force officials say there may have been more than 100 people on the C-130. They say there is little hope of finding survivors. It is unclear how many people on the ground were killed.
The crash of the transport plane, which had been in service since 1964, occurred not long before midday and just two minutes after it took off from Soewondo air force base.
Air force chief Air Marshal Agus Supriatna said the pilot told the control tower that the plane needed to turn back because of engine trouble.
"The plane crashed while it was turning right to return to the airport," he said.
Many passengers were families of military personnel. Hitching rides on military planes to reach remote destinations is common in Indonesia, a sprawling archipelago that spans three time zones.
Indonesia has a patchy civil aviation safety record and its cash-strapped air force has also suffered a string of accidents. Between 2007 and 2009, the European Union barred Indonesian airlines from flying to Europe because of safety concerns. The country's most recent civilian airline disaster was in December, when an AirAsia jet with 162 people on board crashed into the Java Sea en route from Surabaya to Singapore. There have been five fatal crashes involving air force planes since 2008, according to the Aviation Safety Network, which tracks aviation disasters.
Medan resident Fahmi Sembiring said he saw the gray Hercules flying very low as he was driving.
"Flames and black smoke were coming from the plane in the air," he said.
Sembiring said he stopped not far from the crash site and saw several people rescued by police, security guards and bystanders.
Another man, Janson Halomoan Sinagam, said several of his relatives were on the plane when it left Medan.
"We just want to know their fate," he told MetroTV, weeping. "But we have not yet received any information from the hospital."
The plane's manifest showed there were 50 people on the flight from Medan in Sumatra to the remote Natuna island chain, according to North Sumatra police chief Eko Hadi Sutedjo, but the actual number was higher.
Supriatna, the air force chief, said there were 12 crew and more than 100 passengers on the plane before it reached Medan. It had traveled from the capital, Jakarta, and stopped at two locations before arriving at Medan.
The C-130 accident is the second time in 10 years that an airplane has crashed into a Medan neighborhood. In September 2005, a Mandala Airlines Boeing 737 crashed into a crowded residential community shortly after takeoff from Medan's Polonia airport, killing 143 people including 30 on the ground.
On Twitter, President Joko "Jokowi" Widodo said he and his family extend "heartfelt condolences" to the families of victims.
After the emergency response is complete, the government will evaluate the age of air force planes and other important military equipment, he said.
Aviation analyst Gerry Soejatman said numerous nonfatal accidents involving air force planes this year are worrying and suggest there could be shortfalls in areas such as training.
Previously, the air force's safety record was marred by low flight hours and parts shortages that stemmed from a U.S. ban on defense sales to Indonesia, but that situation no longer applies with the lifting of those restrictions more than five years ago.
Medan, with about 3.4 million people, is the third most populous city in Indonesia after Jakarta and Surabaya.

OUT OF MIND » TRUTH IN CONSPIRACY THEORIES? » MISSING & CRASHED PLANES » Over 100 Dead in Indonesia After Military Plane Crashes in Residential Area