A fast moving UFO is seen on NASA's live feed as it passes not far from the International Space Station on October 28, 2015.

The first footage shows the UFO, which flies within sight of the ISS and we can rule out that it is a piece of space debris or space junk because the ISS has a strict protocol, see explanation below, when it comes to a close approach of space debris/space junk or a potential in-orbit collision risk with the ISS. 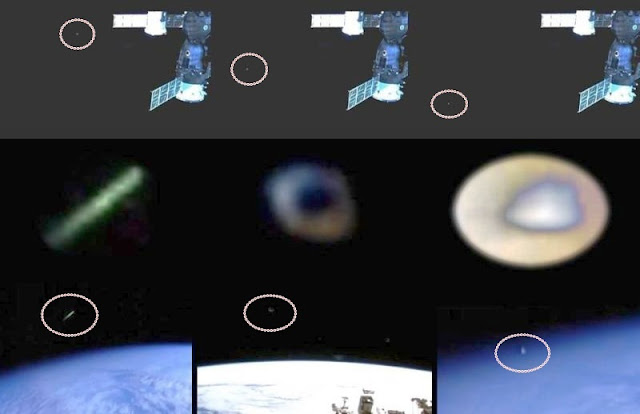 The routine ground-based radar and optical measurements performed by the space surveillance systems of the United States and Russia tracking, correlates and cataloguing all objects larger than 5 to 10 cm in low Earth orbit, and larger than 0.3 to 1.0 m at geostationary orbit altitudes (35 700 km above the equator).

Orbits of debris objects that are large enough to be contained in the US Space Surveillance catalogue can be predicted and compared with the ISS orbit to determine whether a close approach will occur.

Assuming that both orbits can be determined with sufficient accuracy, then a predicted fly-by, or conjunction, distance can be translated into a specific in-orbit collision risk.

If this risk exceeds the ISS threshold level, as set under the ISS flight rules, then the Station performs an avoidance manoeuvre by using the engines of ESA’s Automated Transfer Vehicle (ATV).

As you can see in the first video, the ISS did not performed any manoeuvre to avoid the approaching object which means NASA and the ISS crew were unaware of this large object, and, given the speed and path of the object which seems to come from outer space, whether a UFO, meteor or other space anomaly, you can guess what would have happened if the ISS get a direct hit from the object.

On November 5, 2015 the ISS HD cam captured several other unknown space anomalies/ufos again which you can see in the next two videos.