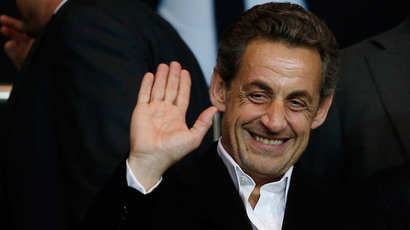 Sarkozy placed under formal investigation for corruption
Lagarde has been accused of “negligence by a person in a position of public authority.”
Bernard Tapie, a former owner of Marseilles football club was awarded €400 million compensation in a lawsuit against the French bank Credit Lyonnais, which he accused of undervaluing his stake in sportswear multinational Adidas. Lagarde, who was President Sarkozy’s finance minister at the time, sent the case to arbitration and ratified the payout.
“Ms. Lagarde would like to reaffirm that she acted in the best interest of the French state and in full compliance with the law,” said a statement from the IMF.
French investigators have been looking into whether Tapie was offered a deal in return for supporting Sarkozy in the 2007 presidential election and whether Lagarde was acting on his orders.
“A decision like this is incomprehensible. I sent her a text, she was really surprised and very disappointed,” her lawyer Yves Repiquet told Reuters.
The French businessman and politician Bernard Tapie was a key shareholder in Adidas. When he needed cash in 1993, he began to look for buyers of his stake, Spiegel reported. Tapie sold his share to Credit Lyonnais for two billion francs. A few months later, the bank, which then belonged to the state, resold the assets to businessman Robert Louis-Dreyfus for twice the price. Tapie accused Credit Lyonnais of fraud and demanded compensation for lost profits, which was eventually paid out in 2007.

French businessman Bernard Tapie. © / Reuters
In 2007, Finance Minister Christine Lagarde intervened in the process and appointed a special committee to resolve the issue. The committee eventually ruled in favor of Tapie and decided to pay him about €400 million.
At the end of June 2013, Credit Lyonnais filed a complaint against the arbitration decision. A court then ordered Tapie to return the €400 million, this went to appeal and in December 2015 this was rejected.
Source: RT News