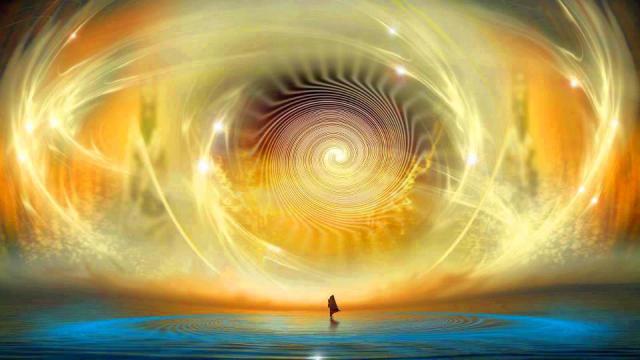 AN conversion is a major process that our whole reality is going through. It is the process through which the Source, the One original creator, is bringing the whole of creation back into unity.
The universe was created as a reflection of the One in which the One is exploring itself. The One is omnipresent in the universe, and yet at the same time it is beyond. The universe is only a mirror image of the One, which was created with a basic template : quantum dyamics. Quantum dynamics is a system in which the created matter oscillates between all possible potentials. The main factor that determines which potential manifests is Will.
The One is by definition perfect, whole and absolute. Perfection and wholeness means that everything is designed with purpose. However, by creating a system of exploration of all possible potentials, a potential was logically created as an opposite to purpose : randomness, also called contingency :

http://recreatingbalance1.blogspot.com/2015/02/contingency.html
This universe that we are in now, as we have experienced it so far, is a result of combining both the One and contingency, purpose and randomness. Evil happened accidentally as a result of interaction between will and contingency. Accidents were possible in the universe because the universe is not the pure One, it is only a mirror image of it, and that image is not fully exact because it contains contingency, and therefore the One is not all powerful within the realms of the universe. Evil is a momentum in which will is submerged by contingency, loses connection with the Absolute, gets turned inside out, and starts to be used for the opposite purpose of what it is originally meant for. This is why ‘evil’ spells ‘live’ backwards.
As part of the exploration process of all posible potentials, the universe was divided into several planes/dimensions (physical, plasma, etheric, astral, etc), each containing various proportions of contingency : In this graphic, the higher the plane is, the less contingency it contains. All existing creation is created first on the highest plane, and then trickles down the planes one by one. All physical matter has come down through all the planes before becoming physical.
The dotted line in the mental plane is the so-called Buddhi Manas membrane, which marks the shift where the amount of contingency becomes so high that reality is transformed quite strongly. Below that dotted line, evil has been possible. Above that dotted line, there is not enough contingency for evil to be possible, so these higher planes were always realms of pure Light and Love.
Matter trickles down the planes in the form of codes of Light flowing through, containing the information about the Divine Will. The more contingency is present in a plane, the more this flow of Light is filtered. Therefore the lowest planes in which we now reside (physical, etc), have only received filtered Light, not the full spectrum, especially on this planet where evil has reinforced these filters. Therefore the reality we have experienced here contains a lot of distortions and does not correspond much to the original Will of the One.
The One is pure Light and Love and does not have any evil in its nature, and therefore did not intend for evil to ever happen, it actually did not even imagine that it could happen. When seeing that the accident of evil happened, the One created a system to correct the anomaly, transmute all evil back into Light, and reconnect all contingency back with Divine Will. This system is the AN conversion.
The AN conversion is a system of direct transmission of Light that bypasses contingency filters, and therefore transmits the flow of Light in its fullness, all the way down the planes. This allows the Divine Will to be transmitted by Light, into the densest matter of all planes, transmuting, healing and reconnecting all reality back with the One. This AN conversion system progressively transforms the universe into a reality where the One is all powerful. When the AN conversion is complete, the universe will be an exact mirror image of the One.
This AN conversion system was anchored on this planet on the 4th of April 2012 :
2012portal.blogspot.com/2012/04/normal-0-microsoftinternetexplorer4.html
and became fuly operational on this planet on December 21st of 2012 :

2012portal.blogspot.com/2012/08/window-of-opportunity-2-secondwindow-of.html
The main anchor for the AN conversion is the AN stargate, located in the central star of the belt of Orion. The original accident that created evil happened in Orion, and therefore that constellation became the central point for transmutation of darkness. The AN stargate was always a portal of Light, and it is through this portal that many souls came down from the planes above the Buddhi Manas, down to the planes below it. These souls are the so-called star seeds, who came with the purpose of helping to anchor the Light in the lower planes, and transmute duality back into Oneness. Each star seed holds keys for the AN conversion.
During their incarnations on Earth, star seeds have built many mirrors of the belt of Orion throughout the planet, to connect with the AN stargate :

The AN conversion will effectively end duality and transform our whole reality into a universe of pure Light and Love, where Abundance, Joy and Bliss are the state we exist in unconditionally. We are anchors of the AN conversion through the use of our free will to choose the Light. By doing so we align the quantum reality so that it can receive AN conversion, progressively healing all of creation. We can connect with the AN stargate in meditation, and also use the primordial sound AN, much like we use the sound OM, to invoke the AN conversion.
Liberation Now !