Can rh negative people recognize each others?

If you are new to this blog, you may say “There is no way to recognize someone based on their blood type”.
If you have been reading through for a while and know of rh negative and positive people in your life, you may believe that you are able to detect a difference.


In the past couple of years, more than ever before, numerous studies have been conducted proving that there are differences in health risks based on people´s blood types .

But how can it be that your blood type could have such a strong influence on you, the way you think, the way you feel and your genetic predisposition overall?
When looking at today´s world, we see a mixture of many ancient tribes isolated based on continents and groups preferring to stick with each others. In the Americas, these groups were more obvious to recognize than let´s say in Europe.
Just as the majority of native American tribes had the same blood type (O positive), looking back a few thousand years into Europe and Asia will lead us towards a likelihood of the original tribes which we have become a mix of have most likely been people who have had the same blood types.
This is why going back to examine the ancestry of rh negatives
is at the forefront of my personal interest.
And because of this special interest, one might guess correctly that one of the reasons for common health risks and potential personality traits based on blood types, common ancestry could be a significant reason.


So what types of personality traits do rh negative people have in common?

Rh negative people are often said to be

– Very sensitive.
– Rh negative women are often described as more sexually aggressive with men being more passive.
– When asked to describe themselves, rh negative people often refer to themselves as intuitive.
– Rh negative people often describe the general population of sheep-like and are sceptical regarding news feeling a strong sense of being lied to and being dumbed down.
– Rh negative people can be believers in silent strength rather than being vocal and loud without anything of substance being behind it.
– Rh negative people feel at peace in nature and sometimes out of place in random groups consumed and overwhelmed by other people´s energy.
– When in a position to make a decision, many rh negative people are convinced that sometimes they just know crediting their instinct as a compass to do the right thing.
– Just like rh negative people can be completely uninterested in something giving up on banalities taking “the high road”, they are said to be extremely passionate and successful (to the point of being mistaken as obsessive) when they are into something.
– As rh negative people are recognizing danger, lies and bad energy, they also feel other people´s pain and sometimes complain about being too compassionate and empathetic and consider themselves at risk of being taken advantage of.
– Rh negative people seem to have different sets of fears more rotating around being afraid of not having enough time to do what they want, a sense of responsibility towards the world as a whole suffering from observing destruction and a fear of not living up to their potential making a needed difference rather than allowing themselves to succumb to the general sets of worries more socially accepted as reasons to panic.

But that´s not all:


What types of personality traits does your ABO blood type carry?

Koreans and Japanese have for the longest believed that your ABO and your personality correlate.
Here are some potential personality traits for the 4 rh negative ABO types as I have observed and received feedback on: 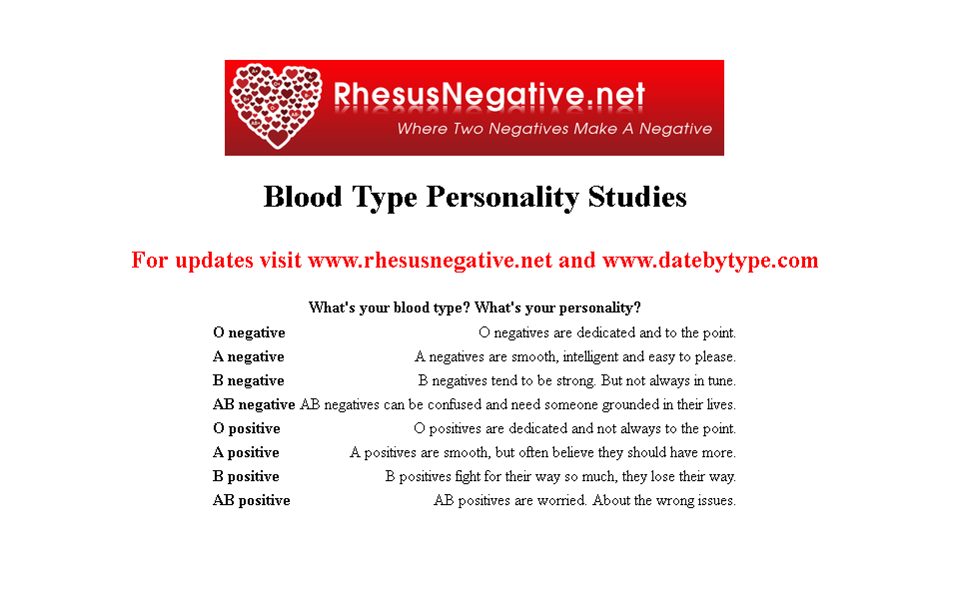 What is an O Negative personality?

O negative are said to be natural born leaders very much in tune with themselves and their instinct and always ready and unable not to act according to it. Unlike A negative people, O negatives are not willing to postpone something important and take more risks in terms of following their inner voice, even though others may be very much in fear of consequences. Because of that, O negative tempers can not only catapult them into leadership, but also lead to isolating, being destructive and alienating others.

What is an A Negative personality?

What is an B Negative personality?

B negative people are highly goal-oriented. Even though sensitive, B negs tend to be mind over matter and seem able to go through tough times knowing the end of the tunnel is near. As B negatives are very goal oriented, they often miss the fineprint and are not always in touch with other people´s motives as they focus very much on their own. To quote feedback from a B negative member of my page :

I’m strong both physically and personally but my wandering mind stops me from focusing with many things and I feel I don’t reach the perfection I want in all things.

What is an AB Negative personality?