OUT OF MIND » PLANET AWARENESS » EARTH CHANGES » As Hurricanes Slam the South, the Western US Is Literally on Fire 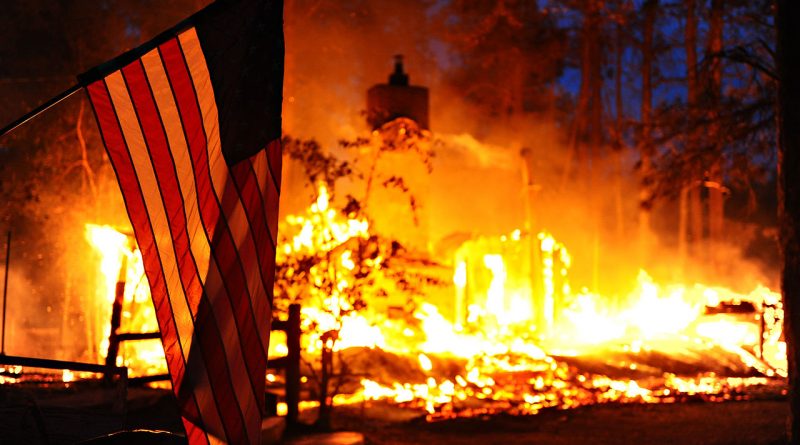 
September 6, 2017 renegade
By Carey Wedler
Amid the aftermath of Hurricane Harvey and the impending destruction of Hurricane Irma, many Americans may not be aware that the western region of the country is suffering the opposite wrath of mother nature. From southern California to Washington, wildfires are engulfing thousands of acres of land and prompting thousands of evacuations. Many of the states battling the wildfires have been doing so all summer .
On Saturday, Washington Governor Jay Inslee declared  a state of emergency across the state due to the risk of wildfires, and the National Weather Service warned that 26 of the state’s 39 counties were at very high or extreme risk. According  to the Washington Department of Ecology, “[a]lmost all of WA [was] awash in wildfire smoke” on Sunday. The department noted  air quality in many areas had suffered as a result. According  to NASA satellite imagery, smoke is also being pushed eastward across the U.S. 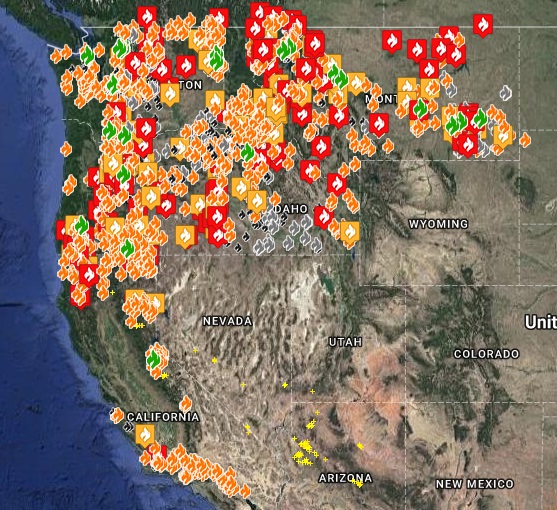 Image credit: fireweatheravalanche.org
Just one fire in Washington, east of the Cascades at Jolly Mountain  in Kittitas County, was burning 15,000 acres as of Saturday. The Seattle Times reported  that “[r]oads in that area have been closed and about 3,800 homes have received Level 2 and Level 3 evacuation orders. Level 3 is the most urgent notice.” The Eagle Creek fire, burning on both sides of the Columbia River Gorge in Washington and Oregon, has torched 10,000 acres while the Norse Peak Fire in Pierce County has burned 19,000 and prompted evacuation orders. It has been burning since the middle of last month.

According to a map  posted by the Northwest Interagency Coordination Center, wildfires are hitting various regions in both Washington and Oregon (they were also plaguing the region last month). Newsweek reported  Tuesday that on Saturday, over 150 hikers were stranded in Oregon after a man-made fire possibly caused by fireworks gained steam.

Though the hikers are safe, “the fire grew to 3,000 acres overnight that first night. As of the morning of September 5th, the fire had grown significantly and had spotted across the Columbia River into Washington near Archer Mountain,” according  to a government-issued incident report. Nearby residents have been served a Level 3 evacuation order, meaning rather than simply being ready to evacuate, they should evacuate right away.
The fire is now reportedly  covering 4,800 acres, and nearly 300 personnel are working to contain it. It is being exacerbated by strong winds and high heat.
Larch Mountain and the communities of Dodson, Warrendale, Latourell, Bridal Veil, and East Corbett were all given Level 3 evacuation orders while other areas were upgraded from Level 1 to Level 2 warnings.

Late Sunday evening, the Oregon Weather Service warned  that “[c]onditions will get worse before getting better. Expect rapid westward movement of the fire as strong east winds continue through the night.” Air quality has worsened and some schools in Multnomah County, Cowlitz County, and Lower Columbia, Columbia Gorge were shut down as of Tuesday, Newsweek reported, with others closing early.
Authorities expect  the fire to burn for the rest of September.
Even western Montana is burning. The Missoulan reported :
“Winds whipped wildfires around western Montana into a renewed fury overnight Saturday into Sunday, briefly trapping firefighters, burning buildings, and forcing new mandatory evacuations.”

At one point on Saturday, every part of the state failed to register “good air” quality. Evacuation orders were issued for at least seven different fires. Montana has been battling fires since July .

Meanwhile, in California, over 10,000 firefighters have been working to contain 23 large wildfires across the state, the Sacramento Bee reported  Tuesday. “Helena Fire in Trinity County is among the most troublesome, with 72 homes destroyed and more than 11,000 acres consumed about 5 miles northwest of Junction City,” the outlet reported.
Though the fire started last Wednesday, Cal Fire reported Tuesday morning that it was only 14% contained, with close to 1,500 firefighters working to put it out. Officials said it is burning in remote, steep terrain, and nearby residents have been issued evacuation orders.
A smaller fire in Butte County has burned over 4,000 acres and burned 32 homes but is currently 76% contained. Evacuation orders in that area have been lifted.
Lower-intensity fires have also plagued Yosemite and entered a grove of 2,700-year-old Sequoia trees. Thankfully, no trees have been killed so far due to their resilient bark and the less aggressive quality of the blaze.
Fires also raged in Los Angeles over the weekend, burning  7,000 acres in what was called the largest wildfire in the county’s history. Flames burned four homes and prompted the evacuations of 700 residents, along with a declaration  of a state of emergency from Governor Jerry Brown on Sunday. That fire is now almost entirely contained.

Due to fires across the state, air quality alerts were issued  for Mariposa, Tuolumne, Mariposa, Merced,  Madera, Fresno, Kings, Tulare, and Kern counties in California. Fires have been burning in the state all summer . The government’s Incident Information System lists 30 active fires of various sizes throughout the state.

In Idaho, multiple active fires  are plaguing  over 200,000 acres of land, with two fires alone scorching over 65,000 acres each so far. Fires in Idaho have been burning since July.

Fires are also burning  in British Columbia , Utah , and Colorado , though they are on a smaller scale.
Well-placed fears about storms on the Gulf coast are dominating national headlines, but the scourge of wildfires throughout the west is also straining resources, threatening wildlife, prompting vast evacuations, and endangering air quality for millions of people.

This article originally appeared on The Anti-Media .

OUT OF MIND » PLANET AWARENESS » EARTH CHANGES » As Hurricanes Slam the South, the Western US Is Literally on Fire