This British Supermarket Chain Is Introducing Plastic-Free Fruit and Veg Areas on Thu May 23, 2019 3:14 pm 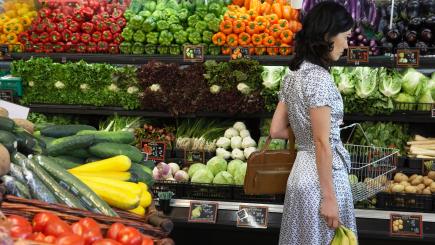 With many departmental stores and supermarket giants going down the path of eliminating plastic, the prospect of the world is looking really hopeful. This time it’s the turn of Morrisons, a British supermarket which is turning out to be one of the first supermarkets to make their vegetables and fruit areas plastic-free.
It hasn’t been an immediate decision for Morrisons. They came to this decision after about a 10-month trial that they did in several UK towns namely Guiseley, St Ives, and Skipton. They found that customers were willing to purchase 40% more vegetables and fruits lose, ditching the use of plastic completely.

So, they have come up with a scheme. Customers can pick about 127 different varieties of their fruits and vegetables. They will have two options after that – buying them loose or using recyclable paper bags. The company believes that it could save about 3 tons of plastic every week. That might go up to 156 tons every year. David Attenborough would be so proud.
The ‘buy bagless’ shelves are being introduced in the plastic-free space and will be present in the fruits and vegetable department. They will have the usual carrots, tomatoes, onions, and apples. Also, there will be unusual seasonal variants like persimmons and celeriac.

According to the fruit and veg director of Morrisons, Drew Kirk, buying stuff loose is a hit among customers. They are creating a greengrocery area which will have no plastic at all. It’s like going back to the times when such bagless buying was prevalent. Customers can buy more or less, depending on their budget or taste.

This year, about 60 stores are looking to have plastic-free areas. Morrisons is trying refurbishment programs too so that more plastic can be conserved. But that’s not the whole of Morrisons. They had also made a statement before that all their plastics will become recyclable and reusable by 2025.

December 2018, the Morrisons were able to introduce 1kg boxes of fruits and vegetables for £1 . They also tried to tackle problems like food waste by introducing ‘Too Good To Waste’ boxes which had different vegetables and fruits, all of them going near their shell life. They were labeled as ‘condition checked’ making sure that they are still edible. Many of their customers do not want good food to go to waste. Thus, these boxes were introduced and they are filled with different stuff that any other store would have thrown away.
Well, as per the company, customers can always try to make different dishes using them, for free. Well, that’s something great, don’t you think?
Image credits:  Morrisons