Lasers Powerful Enough to Rip Holes in the Fabric of Reality are Being Created by Physicists on Tue Oct 01, 2019 9:09 am 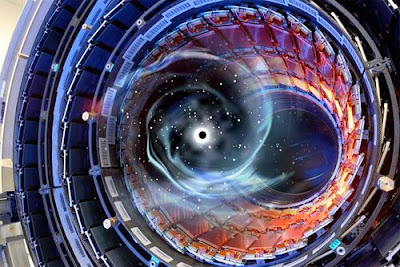 Lasers Powerful Enough to Rip Holes in the Fabric of Reality are Being Created by Physicists
October 1, 2019 ·

New technology could allow a high-velocity laser to pierce “through [the] fabric of the Universe.”
People generally balk at the idea of scientists experimenting with and manipulating certain pillars of physical reality, whether that be gene splicing, artificial intelligence, or nuclear fusion.
But in the last couple of decades, a new twist on this modern Island of Dr. Moreau-style narrative has surfaced in the form of scientists experimenting on high-velocity elementary particles (such as the CERN Hadron Collider) and other quantum enigmas.
Laser physicists recently chortled “hold my beer” in announcing that they are developing a laser so powerful it can shred all matter, including the very electrons and nuclei that constitute the fabric of reality itself.
Earlier this month, the physics journal Physical Review Letters published a paper discussing how new technology could allow a high-velocity laser to pierce “through [the] fabric of the Universe.” The trick, according to a researcher at the Université Paris-Saclay, is to anchor and focus the laser using a mirror made of plasma.
In an analysis written for Ars Technica, physicist and writer Chris Lee broke down the logistical hurdles the new technique could overcome. By consolidating a 5-10 petawatt laser for around 5-5000 joules of energy for somewhere between a picosecond or femtosecond, scientists can muster an intensity of 1022W/cm2, which is when a plasma state kicks in and creates a conductive gas of excited particles whose electrons reflect light.
Other laser experiments have concentrated as much as 200 petawatts of power on a target for less than a trillionth of a second.
Using a plasma mirror, scientists can reach 1029W/cm2 and accelerate electrons to the point where they will be “generating real charges from the apparent nothingness of empty space.”
“The way the mirror oscillates also means that the light frequencies are all multiples of each other,” writes Chris Lee. “The mirror reflects all these colors together, and they add up to a pulse that is even shorter in time. In fact, the pulse goes from being 20fs in duration to 0.1fs (a femtosecond is 10-15s). This by itself increases the intensity by a factor of 100. The shorter wavelength also means that the light focuses to a smaller spot.
“The end result is a factor of 1,000 higher intensity for the same input laser and a simple mirror swap.”
Then what happens?
“They can all stare in wonder at the hole they made,” Lee concludes.
What is the purpose of using lasers to rip a hole in space/time?
Previous laser experiments have sought to discover virtual particles, extra dimensions, and even dark matter. Last year, Chinese scientists used a 100-petawatt laser — “10,000 times more energy than there is in all the world’s electrical grids combined” — to try and produce electrons out of the quantum ether by separating them from their antimatter twins.
For now it appears we’re going to have to trust that scientists know what they’re doing with the fabric of reality.
Jake Anderson
The Mind Unleashed