The Convergence of Science & Real Magic 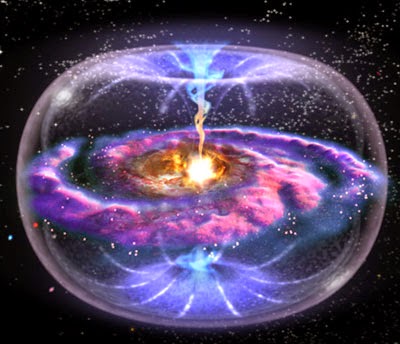 Dean Radin proposes a more comprehensive knowledge hierarchy which places Consciousness (C) at the bottom to indicate where the physical world emerges from. At the top of the pyramid is Mind, meaning the brain’s machinery involved in information processing, cognition and perception. From this perspective, he says, “we enjoy conscious awareness not because the brain generates it, but because (C) permeates every layer of the physical world, just like electrons permeate every later ‘above’ the discipline of physics. Based on his hierarchy, which maintains everything currently known in science… magic is no longer an impossible anomaly.”
What does this have to do with real magic?
Real magic is the pragmatic application of the esoteric worldview, just like today’s technologies are the application of the scientific worldview. That is, if consciousness is indeed as fundamental as the esoteric traditions claim, then magic must be genuine because awareness is primary over the physical world. Thus, we have the capacity to transcend the limits of space and time, and we can determine (to a small extent) how the physical world emerges. Further, human embodiment can now be seen as just one way, among a potentially infinite number of other ways, that consciousness can manifest into a physical being.
Why aren’t there university-based departments of magic? Why can’t we earn an accredited advanced degree in magical practice?
The usual answer is that the esoteric worldview is so radically different from today’s scientific worldview that it cannot possibly be true. But that’s only because the scientific worldview as portrayed in the typical college textbook is five to ten years out of date. The leading edge today in science, represented by articles and books written by mainstream thought-leaders in physics, mathematics, and the neurosciences, is proposing that reality is literally made out of information. That is, the emerging scientific worldview tells us that reality is not composed of matter or energy, but rather of something far stranger, more abstract, and much closer to the esoteric worldview than the materialistic perspective that’s commonly associated with science.
Theoretical concepts aside, how can science study magic? Here’s an example involving tests of the magical force of will. These studies were sparked by asking why ancient practices of blessing food, water, and wine are still vibrantly alive in the modern world. Indeed, proposing toasts with wine and spirits are as popular today as they have been throughout history.
Anthropologists who study these practices have found that wine has been a popular beverage for at least 8,000 years. Its popularity was partially due to its pleasant psychoactive properties, but also because it was much safer to drink than water. Drinking from a pond, a river, or a well can be dangerous because the water might be contaminated. In ancient times (and still today), it was not easy to tell if water was safe or hazardous, and the alcohol in wine tended to neutralise most of those dangers.
Besides becoming a common beverage, wine was also associated with special or “holy” properties. It was celebrated by devotees of the Greek god Dionysus, and it was incorporated into the Catholic belief of transubstantiation. In these contexts, the belief was that divinely inspired intentions could alter the properties of wine, and this belief remains an act of faith for many today. But here’s the rub: Does anything actually happen to the wine that can be detected without having to rely on faith or anecdotal reports?
Research anthropologist Stephan Schwartz conducted a series of experiments to find out. In each test, he took a bottle of Cabernet Sauvignon, separated it into two carafes of equal volume, and then asked a small group of meditators to intentionally bless one of the carafes for 20 to 30 minutes. Then he randomly labelled one A, the other B, and set the two carafes aside. Later, he asked a host of a dinner party to run a taste test. The host didn’t know that one carafe contained blessed wine and the other contained unblessed or “control” wine. The host told her guests that a friend was considering buying several cases of wine and he wanted to see which one was preferred. The guests tasted each wine and marked on a card which one they preferred. The host then evaluated the group’s preference, told them the result, and thanked them for participating.
Over 12 such parties, involving a total of 93 meditators involved in blessing the wine, and 84 party guests, the results were clear. In 11 of the parties the tasters preferred the blessed wine, and in one party the preference was a tie. The odds against chance for this outcome was 2,000 to 1, indicating that under double-blind conditions the blessed wine tasted better than the non-blessed wine. This is an astounding outcome because wine-tasting is a highly complex process involving not just taste and smell, but sophisticated forms of cognitive processing, and neither the host or the party guests knew that they were tasting wine from exactly the same bottle.
Something had happened to the wine as a result of the blessing.
This was not the only experiment to find that focused intention altered properties of a beverage. The late Dr Masaru Emoto claimed that conscious intention could change the shape of frozen water crystals, such that pleasant thoughts would result in beautiful, symmetric crystals, while bad thoughts would result in displeasing, misshaped crystals. Emoto published many books showing results of his tests, but much of that work was more along the lines of artistic efforts rather than controlled experiments, so most scientists were not impressed by his claims.

Dr Masaru Emoto (1943–2014), the Japanese scientist and water researcher, revealed the true nature of water and how thoughts and vibrations affect the molecular structure of water.
After attending a lecture Emoto presented in 2005, we asked if he would be willing to participate in a double-blind, scientific study.
He agreed, and in our collaboration the technician who took the photos of the frozen water crystals did not know if the water used to create the crystals was blessed or not blessed. The blessing in our study was performed by a group of 2,000 people who focused their intentions on bottled water from a commercial source. The unblessed, control water, was another bottle from the same source and purchased at the same time. The results showed that the blessed water produced more beautiful crystals, as assessed by independent judges. This supported Dr Emoto’s claim. Later, we conducted a more rigorously controlled triple-blind study, which again supported his claim.

In his years of water research, through high speed photography of thousands of water crystals, Dr Emoto showed the most beautiful crystals are those formed after the water is exposed to the words ‘love’ and ‘gratitude’. His claims were subsequently backed up by rigorous scientific experiments completed by Dean Radin and associates. (Source: http://www.masaru-emoto.net/english/water-crystal.html )
We followed that up by testing if pieces of a gourmet brand of chocolate blessed by Buddhist monks and a Mongolian shaman would improve the mood of people who ate that chocolate, as compared to people who ate the same but not-blessed chocolate. Again, under double-blind, placebo-controlled conditions, we found a statistically significant elevation in mood among those who ate the blessed chocolate. Later, we tried a similar experiment with people in Taiwan using oolong tea blessed by Buddhist monks. Again, people drinking the blessed tea reported statistically significant elevations in mood as compared to people drinking unblessed tea from the same source.
In these studies, we did not investigate which physical properties of wine, water, or food were altered by the blessing. But something clearly was affected.
Over the past century, many other scientific experiments have explored the effects of focused intention on physical systems ranging from elementary particles, to water, bacteria, seeds, plant growth, red blood cells, electronic circuits, and human physiology (I describe these in Real Magic).
These experiments demonstrate that modern scientific tools and techniques can be applied to ancient magical beliefs, and that when the lens of science is used to inspect magic, to our surprise we find that some of those beliefs are actually true. As science on these topics slowly advances, we may be rediscovering why these ancient practices have persisted for millennia: because they work.
Explaining exactly how they work is becoming a topic of discussion at the leading edges of science today.
Despite evidence for an imminent science/magic convergence, we may not see Harvard announcing its new Department of Magical Studies any time soon. Ancient taboos about magic are still very much alive, and those prohibitions tend to reinforce all sorts of fears: Fear of the unknown, of being thought weird, of being shunned by one’s peers, and of stories about demons and black magic.
Such concerns have prevented the academic world from openly and seriously acknowledging the coming convergence, even though it’s unfolding right in front of our eyes.
Fortunately, the taboo is beginning to crumble because of the popularity of books on affirmations and the law of attraction, the fast-rising mainstreaming of alternative healing therapies, development of new tools for enhancing intuition, the popularity of mindfulness meditation, the blockbuster success of superhero feature films, and in general the flourishing of “positive psychology.”
Given the many challenges faced by the modern world, I believe we would all benefit by encouraging the unprejudiced study of real magic, especially because this topic is really about gaining a better understanding of the nature of consciousness.
Indeed, a case can be made that expanding what we know about consciousness may be a prerequisite for humanity to evolve from our present adolescence phase – which like all adolescents is chronically permeated by angst and emotion – to a more mature phase where concepts like wellness for all and “peace on Earth” become genuine, realistic possibilities.


A Convergence of Science & Real Magic