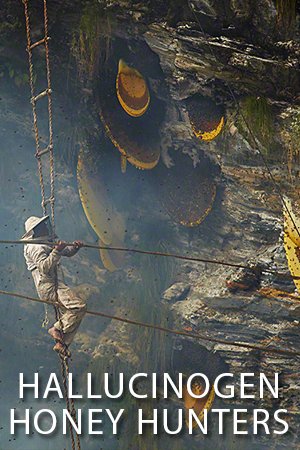 And now for something really buzzworthy! Did you know there are honey bees who live high in the Himalayas, producing their artisan goods with a little extra oomph in them? This honey is definitely not for your Monday morning cup of tea at the office.
The bees’ special honey is known as Red Honey, and it’s made from poisonous flowers. This is most likely what gives the honey its medicinal qualities… and also makes it hallucinogenic. Want to learn more? Buckle up, we’re going to Nepal! (1)
Honey Bee Heaven
Tucked into the highest peaks of the Himalayan mountains is where we find a secretive tribe of Gurung people, and among them, a group of men known as the Honey Hunters. This tribe of about 150 people is very far from civilization. In fact, it’s about a 2-day walk to the nearest road. The Gurungs are almost totally self-sufficient. They grow an array of vegetables, mill their own cereal into flour, and have even domesticated bees. They allow them to colonize in their homes alongside their families. With them living right there in the walls, the honey can be harvested more easily. The world’s largest honey bee lives here in the lush green forest alongside these mysterious and interesting people. Known as the Giant Honeybee of the Himalayas, it measures 3cm long on average. They make huge nests attached to cliff overhangs that reach 5 feet in diameter. Not only that, they can contain up to 60kg (132lb) of honey!
For only one month a year, the bees make this honey, which has hallucinogenic properties and many believe it has aphrodisiac qualities as well. This prized honey sells for up to 4 times the price of regular honey, so the Honey Hunters are known to take some crazy risks to harvest it. But interestingly, these men seem to have a certain connection with the bees. They wear almost nothing in terms of protection and rarely suffer any ill effects.
The Honey Hunt
When that special time of year arrives and it’s time to harvest, they set out at dawn. They hike even higher into the mountains, in search of a buzzing black mass clinging to a mountainside . Upon spotting one, the hunt is on.
First up is a Hindu Puja ritual, where incense is burned and prayers of a safe and successful harvest are put forth. The ritual is said to be invoking the protective spirits of the forest to watch over them. Interestingly the Gurungs are Buddhist, making a Hindu ritual seem out of place. But this ritual is a throwback from generations ago. Indeed, there is a long history of honey hunting in this tribe, going back years upon years. It is a lifelong quest, and they pass the torch to their sons when it’s time.
After the ritual is complete, they prepare their tools, including bundles of green leaves for smoking the bees out. They create a meters-long ladder and anchor it to the cliff. As the hunter ascends the ladder, it’s clear that harvesting the honey is something of a dance between him and the bees. (2) There is a degree of respect, a sense of asking permission. Of course, the bees can and do sting, but there is a deftness to the hunter’s maneuvering that tells a deeper story, one of generations.
It’s a long day to be sure. At the end of it is a payload of strong natural medicine for body and mind. To the Gurung people, this honey doesn’t just represent a paycheck. Honey, to these people, means a long and healthy life. It is a gift to be cherished, from Mother Earth herself.
Sources