Source – greenmedinfo.com
– “…Legislators contend that such measures are needed to protect public health, and that sentiment is echoed in media reports nationwide. An opinion piece published in the Chicago Sun Times pushed for changing the state law to allow 12 year olds to override their parents to get vaccinated. In it, the author says, “Parents’ resistance to vaccinations was once typically rooted in religious convictions. In recent decades, too many parents have made irresponsible decisions because they believe anti-vaccine myths or think the government is overreaching by requiring vaccinations. This is now part of our broader culture wars”
Parentectomy: The State-Driven Campaign to Remove Parents’ Rights

Eight states currently permit minors to be vaccinated without parental consent; 20 states — Alabama, Alaska, Arkansas, Delaware, Idaho, Illinois, Kansas, Louisiana, Maine, Massachusetts, Montana, Nevada, Oregon, Pennsylvania, South Carolina, Tennessee, Washington and West Virginia — have made allowances for “mature minors” as young as age 12.
After giving birth to her fifth child in 2018, Angela Bougher and her husband — a suburban Chicago pastor — were eager to hold their new baby girl. However, according to the couple, their newborn daughter was removed from their custody after they verbalized their intention to decline the vitamin K shot.1
The Boughers allege that instead of allowing them to sign a waiver form for the shot, as was previously agreed to, the nurse declared that she was reporting the couple to the Illinois Department of Children and Family Services (DCFS) and left the room with their newborn.2 According to the Boughers — who declined the vitamin K injection based on their religious beliefs — the hospital took possession of their daughter for about 12 hours before she was returned to them.3
The incident highlights the contentious debate that exists today over the rights of parents to make decisions about their children’s healthcare.
From the Womb to the Courtroom
In September 2019, the Boughers and several other parents filed a sweeping federal class-action lawsuit for violating their constitutional rights right after the births of their children. The lawsuit targets multiple hospitals, the Illinois DCFS, and individual doctors accused of conspiring to remove newborns through coercion and intimidation.4
Recordings from a committee meeting reinforce claims that doctors and DCFS case workers colluded to use the courts and hospital policies as a means of taking custody of newborns from parents who specifically refuse vitamin K.5 The claims did not mention parents’ concerns over a manufacturer’s black box warning noting that severe reactions, including fatalities, can occur during and immediately after injecting newborns with vitamin K.6 A growing number of scientists and medical providers also contend that the aluminum levels in vitamin K are concerning .7
The Erosion of Parental Autonomy
As states across the nation roll out legislation to remove religious exemptions to vaccine mandates, dangerous language is also being written into bills to further erode parental rights. This is a particularly dangerous slippery slope, as it threatens parental rights and informed consent rights while endangering the sanctity of the parent-child relationship.
The erosion of parental autonomy has been on a fast track for at least a decade, coming full circle for exposure when Boston Children’s Hospital (BCH) medically kidnapped Justina Pelletier, a teen from Connecticut.8 The 16-month tug-of-war between Justina’s parents, Massachusetts state officials and doctors — along with reports of Justina’s “torture” and confinement to a psychiatric ward — led to social media outrage, which turned into international scrutiny of what has long been standard procedure for big medical institutions. The tyranny imposed on families now had a name, as described by the physicians at BCH: parentectomy.
The Pelletier case drew intense scrutiny and attention from Massachusetts lawmakers. Unfortunately, Justina’s story didn’t stop Massachusetts lawmakers from recently adding in “mature minor” language to proposed legislation to remove religious exemptions to mandatory vaccines for school attendance.9 Sewn into the proposed legislation is language declaring doctors and “mature minors” in charge of all health decisions.10 This is another classic example of parentectomy, just in a different form.
Under the proposed legislation, Massachusetts parents would not be notified if their child received one or more vaccines, nor would the vaccine(s) administered be listed in the child’s medical records. 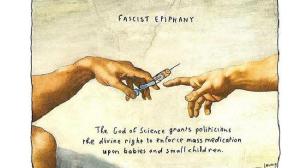