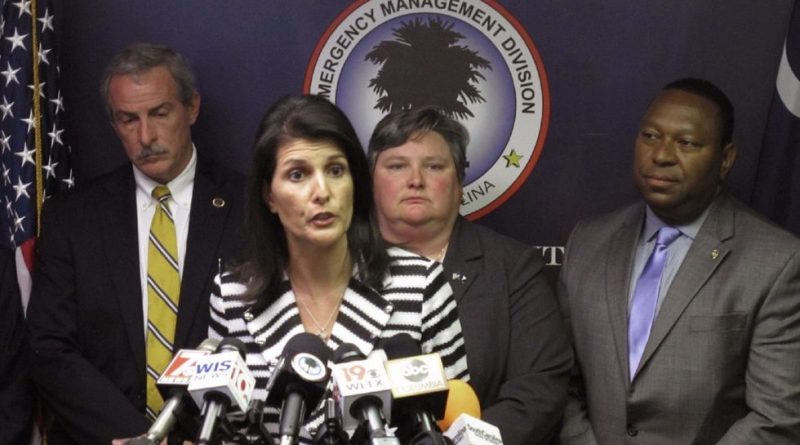 Is Mandatory Evacuation of One Million SC Residents for Hurricane Matthew Doubling as a Martial Law Drill?

October 6, 2016 renegade 0 Comment
By The Daily Sheeple
As Hurricane Matthew bears down on the East Coast, citizens in Florida, Georgia and the Carolinas are getting prepared but some are being forced under armed guard to evacuate. Florida Gov. Rick Scott is warning it could be the biggest evacuation in Florida state history.
South Carolina Gov. Nikki Haley announced plans this morning to evacuate “designated zones” of what was at first reported as a quarter of a million people within 100 miles of the state’s coastline specifically to Greenville, South Carolina 200 miles inland. It has now been announced South Carolina will evacuate over 1 million people.
A fleet of 315 school buses from Greenville has been dispatched to retrieve people from Charleston and transport them back to Greenville. The evacuation isn’t voluntary, either. According to Greenville Online :

The evacuations are not labeled mandatory or voluntary anymore, Haley said. “An evacuation is an evacuation.”

A concerned citizen sent The Daily Sheeple a message that evacuating to Greenville means they are evacuating a million people to a town specifically known to host one of the state’s few known FEMA camps:

“I was watching Governor Haley’s news conference this morning on evacuation procedures for Hurricane Matthew.  She personally stated her desire to evacuate every citizen within 100 miles of the coast, with the intent to move them to Greenville, SC.
As you may be aware, there is a known FEMA detention camp in Greenville.  Also, President Obama has set up a “constitution free” zone reaching 100 miles inland from all US coastlines.
I believe this to be a practice run for an eventual nation-wide declaration of martial law…” ~ Marshall

He is not alone in his concern.
A quick search reveals that multiple sites across the web list a youth detention camp near Greenville as a FEMA camp.
There are also theories regarding underground military infrastructure that was built to run through the Greenville-Spartanburg, South Carolina area, with Walmart set up as a staging area.

In order to further protect the homeland and ensure the safety of it’s citizens in case of nuclear, biological, or chemical attack, a join venture of the NSA, DOD, MiB, DHS, CICs, DFCS, and BK has been created in order to create an expansive tunnel system throughout the south. These tunnels will also serve as conduits for national defense to rapidly move troops, supplies, and armor throughout the nation between strategic topographical locations. A map of the believed military and government installations affected and connected by this tunnel system: Paulding County, Georgia, is said to be the central location of the project. Yorkville, Georgia is to be a terminus of sorts for the hubs in:
Anniston, AL
Raleigh-Durham, NC
Greenville-Spartanburg, SC
Macon, GA
Lookout Mountain, TN
Lockheed Martin in Marietta, GA
Wal-Mart’s involvement in the project has not yet been officially commented on, but it is generally perceived that Wal-Marts in these areas are staging areas for the tunnel project. It is to be noted that this project is under a great deal of scrutiny by those who live near the ongoing construction project. Analysts do not believe the project will be available for public use, and will not be publicly acknowledged (rumors of usage by NASA for it’s installation in Huntsville, AL have been found to be true).

This ties in with several other Walmarts around the country being suddenly shut down last year and all employees laid off with five hours notice for suspicious “plumbing repairs”.
As mentioned, we all know a 100-mile Constitution-free zone has been designated around the entire border of the United States, which includes more than half of South Carolina and the entire state of Florida.
Hurricane Matthew isn’t a joke, but at 5 a.m. this morning, the projection shifted east, meaning the hurricane will likely still hit South Carolina but with less force than previously thought. It is being reported that it will hit as a category 2, possibly 3 at this time.
Gov. Haley, however, isn’t playing around, which is good or bad depending on how you look at it. Watch the press conference below.
The state of emergency was already declared and the National Guard was already been activated days in advance, and again, they have removed the words “voluntary” and “mandatory” from the equation all together. People aren’t being given a choice. They are being forced. Haley did not specifically discuss where all the Charleston residents bused into Greenville on 315 buses would be going once they got there.
The governor also discusses how police and national guard will be lining the highway to give an armed escort to evacuees, including 700 “traffic control points” set up and “comfort stations” where people can go to the bathroom or get water as they are evacuated… under armed guard.
“You’ll see lots of law enforcement officers as well as guards,” she warned South Carolina residents.

Sure sounds like martial law, doesn’t it?
Kind of interesting on the timing too, considering Russia is currently overtly holding a civil defense drill that involves 40 million of its residents… Makes you wonder if the government would even tell us of their concerns about potential war here in America, or if they would just use natural events like this to run a drill without causing a widespread panic. Likely we’d be kept in the dark on a “need-to-know” basis like we have been as citizens of this country ever since World War II.
Meanwhile grocery store shelves are being stripped of storable foods and water throughout the potential hurricane landfall areas, and home supply stores like Home Depot are running out of plywood, generators, and propane because people are not prepared .

Posts : 185
Join date : 2016-05-03
I believe it is. they are receiving 108 buses from Greenville. The skull on the map is indeed a skull. This is encryption to mean nwo. None of the videos about the evacuation posted today have any volume on youtube. I cannot hear the words. If this is intentional, then it's indication of a drill like a false flag. Plus she said their goal is to make sure there are no cars on the road. Why no cars? Its' not about the people, it's about clearing the streets and people drive the cars. Bring important documents...another sign these people may not see their homes again. It's not about the storm. It could be a storm of another kind, an attack by a russian sub off the coast of florida. war is started I think.

Posts : 185
Join date : 2016-05-03
every year we have done preparation "for this moment". This is planned, practiced for 6 years. not like the flood, not like other storms. Category 2? They've had category 2 storms before. "Save everybody we can"...they know something they are not telling. shame on them.

Posts : 185
Join date : 2016-05-03
Zone A across the board evacuation...1.1 million people. This is inevitable. They are not negotiating and won't change their plans if the storm doesn't hit. "What is going to happen tomorrow". She has orders from somewhere and she has no choice, neither do the people. scary.

Posts : 185
Join date : 2016-05-03
Update: they are now saying 250,000 people, not 1 mill. Medical evacuations are already underway- this could be the sole reason folks. Look at who they are herding into busses to...well...maybe camps, I don't know, they say Greenville (known camps there, juvenile prison complex as well). They've ordered helicopters, military. For cars, no verification that gas trucks will be able to fill terminals at gas stations!

These are the groups they are taking in true Agenda 21 style:
acute care hospitals - very sick, terminal people
alcohol/drug addiction hospitals - veterans, baby boomers who have tanked, sensitives are here most able bodied though
day cares for adults - elderly
residential aged facilities - rich elderly.
you will be killed if you stay was the message in Florida.

Check out this numerology; 108 buses, with room for 6,600 beds. Oh, and don't try to get a hotel, all the hotels in the midlands are booked (governor already checked it, don't try) hmm, they don't want people in hotels. Why is that?

I think they want people to take their cars so they can say they voluntarily left even if they never get the car to the North because they ran out of gas. At least people are cooperating and that is what they like.


Any Florida Treeper who finds themselves in need of help, please feel free to use the comment section and we’ll work earnestly to assist. Prayers for all.

At 200 PM EDT (1800 UTC) , the eye of Hurricane Matthew was located near latitude 25.7 North, longitude 78.4 West. The hurricane is moving toward the northwest near 14 mph (22 km/h), and this general motion is expected to continue today with a turn toward the north-northwest tonight or early Friday. On the forecast track, the eye of Matthew should be near or over Freeport in the Bahamas in the next few hours, and move close to or over the east coast of the Florida peninsula through Friday night.

Maximum sustained winds are near 140 mph (220 km/h) with higher gusts. Matthew is a category 4 hurricane on the Saffir-Simpson Hurricane Wind Scale. Some additional strengthening is possible, and Matthew should remain a Category 4 hurricane while it approaches the Florida coast.

Hurricane-force winds extend outward up to 60 miles (95 km) from the center and tropical-storm-force winds extend outward up to 160 miles (260 km). Nassau in the Bahamas reported 97 mph (156 km/h) sustained winds earlier today when the northern eyewall moved over that island. The estimated minimum central pressure is 939 mb (27.73 inches).
Hurricane conditions are expected to first reach the hurricane warning area in Florida by late today and will spread northward within the warning area through Friday. Tropical storm conditions are first expected in Florida within the next several hours.
Hurricane conditions are possible in the hurricane watch area in northeast Georgia and South Carolina by early Saturday, with tropical storm conditions possible on Friday night. (read more ) 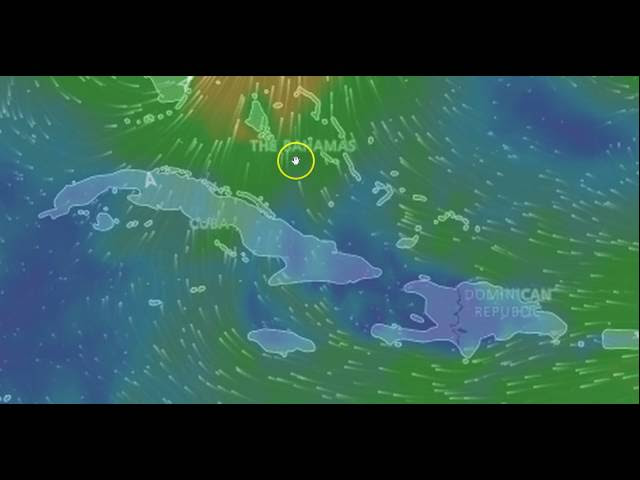