OUT OF MIND » DISCLOSURE » HISTORIES MYSTERIES » Have You Ever Seen The Mysterious Petrified Waterfalls Of Oaxaca?

Have You Ever Seen The Mysterious Petrified Waterfalls Of Oaxaca? 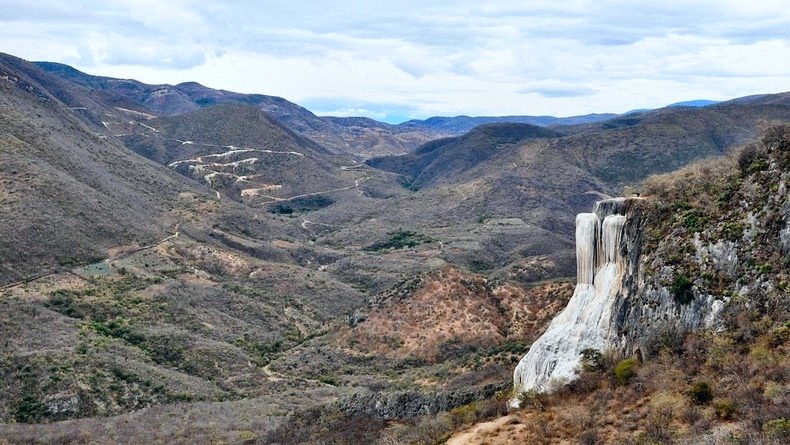 Have You Ever Seen The Mysterious Petrified Waterfalls Of Oaxaca?

The Petrified Waterfalls Of Hierve el Agua Are One Of The World’s Most Stunning And Mysterious Occurrences.
Hierve el Agua is located in the Mexican state of Oaxaca, about 70 km east of Oaxaca city, and 14 km southeast of the town of Mitla. Hierve el Agua is Spanish for “the water boils”, and the name comes from the bubbling natural mineral springs that are found here, that run into bathing pools on a spectacular cliff-top location.

When you approach Hierve el Agua, from a distance, you see what appears to be a massive waterfalls frozen on the side of the mountain. But ice is impossible in this hot climate.
Initially, I was confused looking at these waterfalls because in Spanish, hierve means to boil. I expected boiling water over the side of a mountain, an endless loop. Instead, Hierve el Agua appeared to be frozen, cascading down the side of a cliff to the valley below. 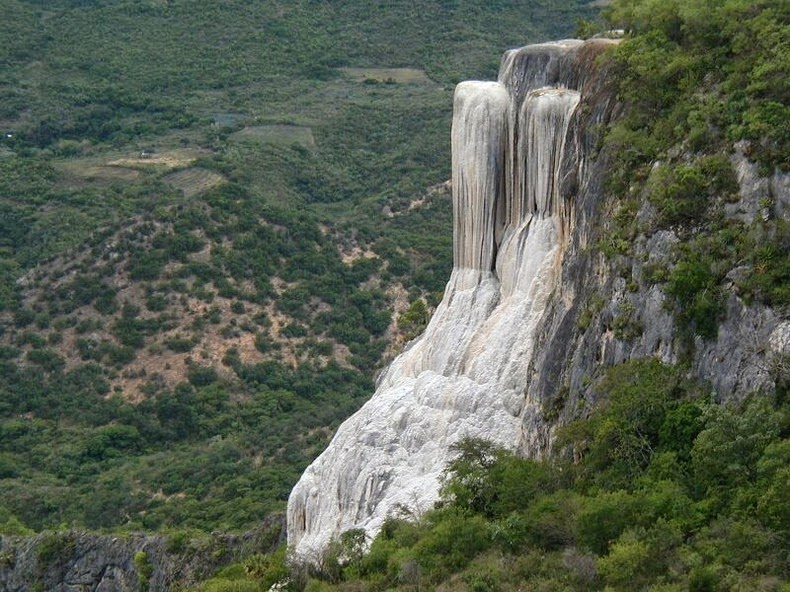 After my visit, I learned that Hierve el Agua was created by mineral water that pushed through karstic limestone, depositing the falls onto the mountain’s edge. While the waterfalls are white, two mineral pools sit at the edge of the cliff, full of calcium carbonate, magnesium, and just enough sulphur to lend them a yellow hue.
These are actually mineral deposits formed over thousands of years as a result of the mineral-laden water spilling over the edge of the cliff and trickling down the rocky mountain side. As the water runs down the rock face, it forms large stalactites like structures similar to those found in caves. 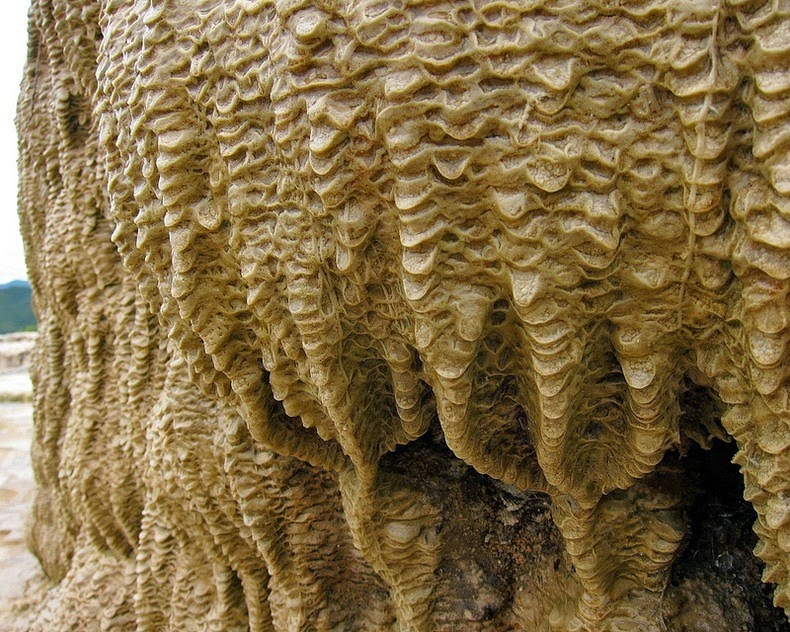 Hierve el Agua consist of two waterfall-like rock formations. These are formed on cliffs that rise over fifty meters from the valley floor, with one “waterfalls” reaching down twelve meters and the other reaching down thirty meters. 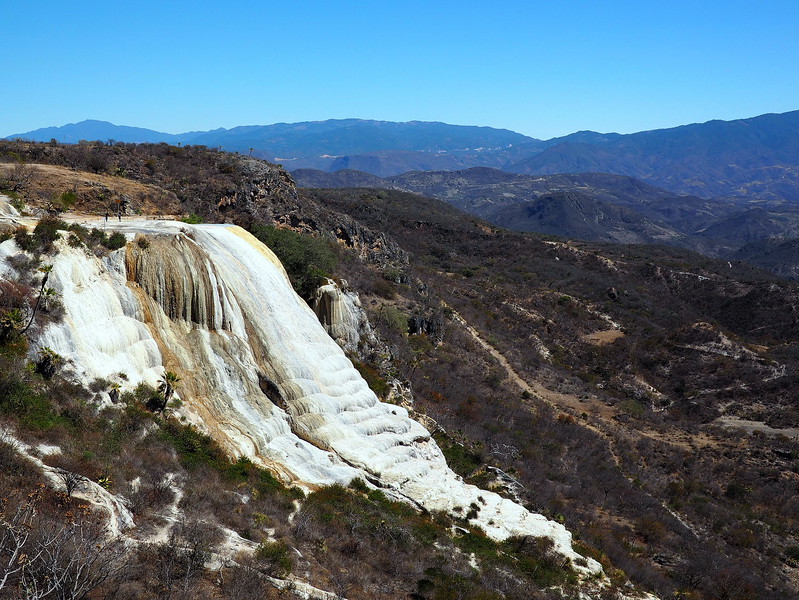 The twelve meter one is called “cascada chica” (small waterfall) and “flows” off a base which is about sixty meters wide. The other is called “cascada grande” (large waterfall), and extends down from a base with which is about ninety meters wide and eighty meters above the valley floor. The more easily accessible and more often visited of the two waterfalls is the “cascada chica.” It is also called the Amphitheatre. 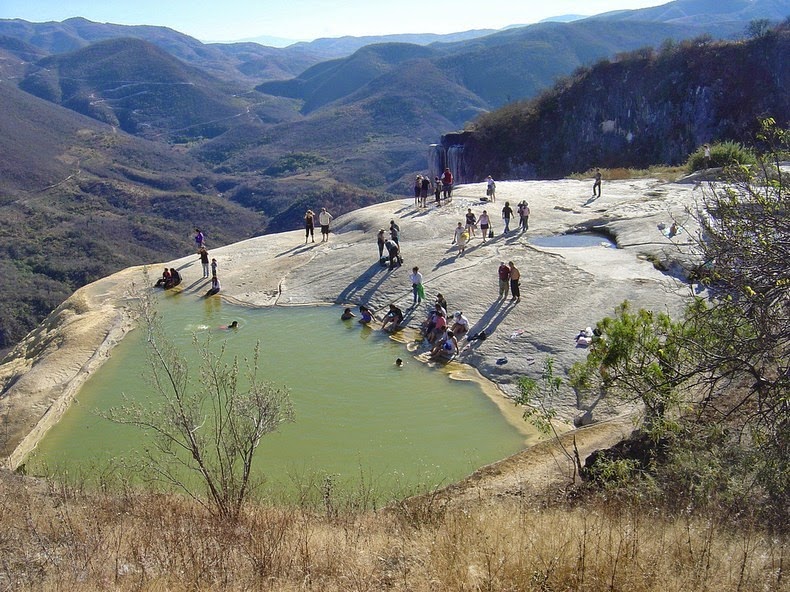 The waters of the spring is over saturated with calcium carbonate, which is what gets deposited forming the waterfalls-like rock structures. The waters, with their high mineral content, are reputed to have healing qualities, and you will see tourists soaking in the waters in one of the natural pools at the top of the rock.

OUT OF MIND » DISCLOSURE » HISTORIES MYSTERIES » Have You Ever Seen The Mysterious Petrified Waterfalls Of Oaxaca?