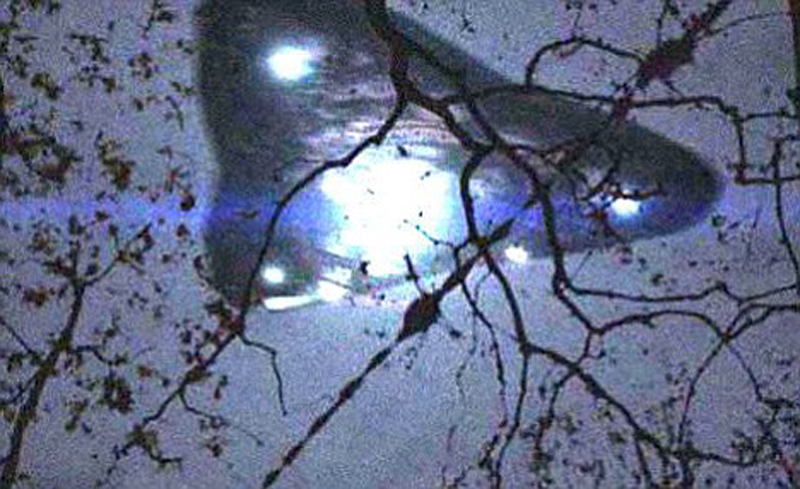 On Christmas night in 1980, US Airmen Jim Penniston and John Burroughs venture into England's Rendlesham Forest to investigate a probable downed airplane.

What they see defies description - is it a glowing orb, a classified military craft, or a UFO from a distant galaxy? The two men are even more mystified when they discover missing time and their memories don't match up. Two nights later, while haunting visions keep Penniston awake at home, Burroughs and a team of men return to Rendlesham forest and discover more strange lights they can't explain. The airmen report their findings to their superiors and are instructed to hush up their accounts. When a series of mysterious physical ailments turn Pennsiton and Burroughs to hypnotherapy for answers, they discover an unearthly explanation that pushes the boundaries of time and space.
Around 3 a.m. on 26 December 1980 strange lights were reported by a security patrol near the East Gate of RAF Woodbridge apparently descending into nearby Rendlesham Forest. Servicemen initially thought it was a downed aircraft but, upon entering the forest to investigate, they saw strange lights moving through the trees, as well as a bright light from an unidentified object. One of the servicemen, Sgt. Jim Penniston, later claimed to have encountered a "craft of unknown origin" and to have made detailed notes of its features, touched its "warm" surface, and copied the numerous symbols on its body. The object allegedly flew away after their brief encounter. Penniston also claimed to have seen triangular landing gear on the object, leaving three impressions in the ground that were visible the next day. While undergoing regression hypnosis in 1994 Penniston subsequently claimed that the "craft" he encountered had come from our future, and was occupied by time travellers, not extraterrestrials. Sgt. Penniston's report made shortly after the incident contains no mention of physically encountering an unknown craft, nor of interacting with it. This report and associated sketches are neither signed nor dated, nor are they representative of AF Form 1169, Statement of Witness.

The following day, back in his room Jim was troubled by the revolving flashing images of ones and zeros he received from touching the glyphs. He felt compelled to write them down in a notebook. Jim records the ones and zeros in his notebook. Upon completing the transfer to notebook paper, the image in his mind disappears. Jim puts the notebook away with his belongings and doesn't think too much about again until the year 2010. In 2010, during a casual conversation with a researcher, he mentions the codes and displays the notebook. The researcher immediately recognizes the ones and zeros as binary code and sets out to help Jim decipher it.

The Rendlesham Forest Incident Binary Codes and the seven coordinates deciphered from the code.


An Ancient City in Central America
A location in South America
Sedona, Arizona
Giza-Egypt
An Island in Greece
A location in China
Hy Brasil