Exemption Account is Public Law - Your debts are Pre-Paid

Exemption Account is Public Law - Your debts are Pre-Paid 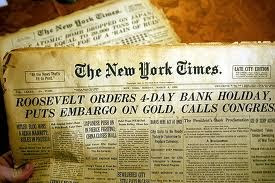 Exemption Account is Public Law - Your debts are Pre-Paid
August 15, 2013

More great work put forth by Justin Deschamps at the Stillness in the Storm blog. Click here for a direct link to this post. Justin was right on in the comments he made to go along with this article he dug up. Putting out this information is not intended to be a "how-to" when it comes to accessing one's Exemption Account. It's ,merely to raise awareness that there IS one, and help all those doing their research to better understand the validity to the $5B secured for every soul on the planet, by the (now retired) One People's Public Trust.

In my humble opinion this is not nor has ever been about setting up a new monetary system; it IS about reconciling the old one and creating something new not based on the need to establish value outside of ourselves. This is not an easy concept to explain, as a society based on commerce is the only thing the greater majority of the people on this planet are familiar with. The idea of a system totally new is such a foreign concept, any mention of the idea is met with great resistance and often anger and total outrage. No one person has all the answers, we're collectively creating this new reality as we go. If I knew a definitive timeline, I would have already shared it. In the history of humanity nothing like this has ever been done before. My salvation continues to be watching in awe as it all unfolds, releasing ALL attachments of what I think it should look like, or how I feel it should go, based on my current limited state of consciousness. All will be revealed when it is ready. I, and many others, feel like that moment is upon us NOW. The signs are EVERYWHERE. Never take my word for it, or the word of ANY other for that matter. The answer is always go within. Our souls don't operate on time, everything is always happening now and there's never a moment it's not perfect. Trust the process. All is well. ~BK

Also for more background info make sure to check out Justin's post:
The Government MUST pay all your DEBTS! - History of your Exemption Account


Thank you Harriet from Facebook for pointing this out. This is yet more DATA Confirming, indeed the government MUST pay your DEBTs (or Discharge your debts via the Public Remedy because the government took away all other methods of paying debts). Yes this is true.

The OPPT filings did secure $5 Billion for all BEings on the planet. I have gotten a lot of questions about why would a Strawman or Redemption account be needed in light of that. If the entire population of the planet acknowledged the validity of the OPPT filings then maybe these accounts would not still be workable. And I think enough people are standing up in that Truth now. Eventually a DOV accessing the $5 billion will become a reality. Until then however, you may be able to discharge your debts using your exemption account.

I do not have a thorough complete process for discharging debts. I have heard of people using it successfully, but have not done it yet myself. It is important to note that this process was truly reconciled with the OPPT filings. If it is still operating, it is unlawfully within the context of the UCC Filings by the Former OPPT. The following is for educational and clarification purposes.

An Analysis of the Facts, by: Kevin, of the family: Hines

"Was HJR-192 repealed?" I can't even count the number of times I've had gullible sovereigns asked me this question. They have blindly believed this patriot mythology without thinking it through. That's the problem: sovereigns who are too lazy to do any research or think through a rumor thoroughly before blindly believing anything they hear or read. Stop watching the NFL games on Sunday and start thinking things through!!!

First of all, "HJR-192" is the short name for "House Joint Resolution 192", so let's understand what a "resolution" is. A New Year's resolution applies to you, the one who made it, not to your next door neighbor or anyone else. You're the one who "resolved" to lose weight or quit smoking or exercise more, and your neighbor is not obligated to do what you resolved for yourself. "HJR-192" is strictly a resolution that applies only to the members of Congress (who "resolved" it) and to its subjects. It can be modified at anytime by Congress if they so choose, just as you can modify your New Year's resolution if you so choose.

However, modifying a Public Law is a little different matter. The law in this instance, per the actual "Statutes at Large" books, is identified as: "Chap. 48, 48 Stat. 112". I went down to the SMU Law Library, found it, and photo-copied it for myself. It contains the very same wording as "HJR-192"; however, one is a resolution and one is a Public Law.

Always do your own homework. Verify everything

Kevin's Rule #4 - "Always do your own homework. Verify everything. Discern fact from error, truth from lies. Never act based on someone else's claims!!"

If I refer to "HJR-192", am I not telling the listener or reader that I am a subject of Congress, and that I am a citizen of the UNITED STATES?? Sorry, but that is the last thing I want to say. I can, however, say that the Federal Government has placed insufficient amounts of lawful money in general circulation, i.e., gold and silver coinage, thus, forcing me to "discharge" my debts with commercial paper, i.e., putting them off to a future point in time, and restricting my obligation as a sovereign to "pay" a debt.

When the Federal Government took much of our lawful money out of general circulation in 1933, i.e., gold coins, thus leaving an insufficient amount of lawful money in general circulation to meet the needs of the people, i.e., only silver coins remaining, the Congress was required to give the people a remedy. Public Law: "Chap. 48, 48 Stat. 112" is that remedy. It states that the Federal Government will pay my debts, dollar for dollar. Note: It doesn't say that the government will pay for anything I desire to buy (like a car), only that it will pay my legitimate debts.

States no longer able to function as De Jure

Most, if not all, of the State Constitutions require the State to pay its debts in gold and silver coin. By taking away a State Government's ability to comply with it's Constitutional mandate of paying its debts in gold and silver coin, the Federal Government involuntarily restricted a State Government's ability to function in a de jure capacity. The de jure States went into suspension after the following four acts were committed: (1) the taking of gold coins out of general circulation in 1933, (2) in 1964, the U. S. Mint ceased minting any more silver coins, (3) in 1968, Silver Certificates could no longer be redeemed for silver, and (4) on August 15, 1971, President Nixon closed the Gold Window, thus stopping the redemption of foreign-held dollars for gold. At that point in time, the U. S. Dollar was backed solely by the full faith and credit of the American people, and the States could no longer function in a de jure capacity while in a state of suspension.

The States went into suspension because the Federal Government involuntarily forced the State to pay its officers, judges, employees, etc. with something other than gold and silver coin, which was required by the State Constitution. This "something other than gold and silver coin" was nothing more than "fiat" money, or script, back by nothing but the labor of the people. Thus, Constitutionally, the States could no longer function in a de jure capacity because it no longer had the ability to pay its debts in the form mandated by its Constitution, i.e., contract with the people.

"Chap 48, 48 Stat. 112" is the Remedy
Since the Federal Government took away the gold coin money in 1933, thus causing the States to suspend operations by preventing them from honoring their obligation to pay their debts in gold and silver coin, then there had to be a remedy. "Chap 48, 48 Stat. 112" is the remedy, not just for the States, but also for the sovereign men and women who created the States. Until gold and silver coinage is reinstated in sufficient quantities for general circulation, that remedy cannot be repealed. Congress may have repealed some parts of "HJR-192", or even all of it, because "HJR-192" is merely a resolution for Congress and its subjects. However, the true remedy is provided to the people by Public Law: "Chap 48, 48 Stat. 112".

Until Lawful Money Returns, the Remedy will ALWAYS be there

Until the State Governments come out of suspension, by the Federal Government's placing sufficient quantities of lawful money into general circulation, your remedy, pursuant to "Chap 48, 48 Stat. 112" cannot be repealed and will continue to be there. The remedy of the subjects/citizens found at "HJR-192" might not be there because their remedy is nothing but a resolution, but the remedy of the sovereign found at Public Law: "Chap 48, 48 Stat. 112" will still be there because a sovereign's remedy is Public Law.

If, as many uninformed sovereigns claim, the promise that the Federal Government will pay your debts, dollar for dollar, is no longer valid, then these sovereigns have no basis for claiming their remedy by using the 1099-OID process for the refund of out-of pocket funds expended to pay their debts. Either (1) you believe that the Federal Government repealed your remedy, and therefore, there is no 1099-OID refund process available to you, or (2) you believe the Government has an obligation to pay your debts, dollar for dollar, and therefore, the 1099-OID process for a refund is your remedy and you can use it to recover the funds you expended to take care of your debt obligations. You can't believe your remedy has been repealed, and then try to claim your remedy by asking for a refund using the 1099-OID process.

Difference between a Resolution and a Public Law

Now that you understand the difference between a resolution and a Public Law (and why your remedy was given to you), you may recall how a well-known "patriot attorney" who specializes in tax matters has worked hard to intentionally mislead sovereign men and women into believing that their remedy has been repealed. HOGWASH!!! He's talking about a subject's remedy by resolution, not a sovereign's remedy by Public Law. Please do your homework and think outside the box before disseminating patriot mythology to others, possibly causing them to stumble by your lack of research and knowledge. If you wish to continue arguing this ridiculous allegation without doing your homework, i.e., refusing to spend the time required in studying the monetary system in detail, please do so privately, not on any public forum, so as not to mislead others with such mythology.

By: Kevin, of the family: Hines, a sovereign man,

with a common law copyright on this,