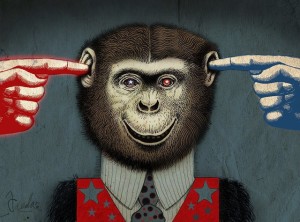 Art by the one and only, Anthony Freda.
Gregg Prescott, M.S., In5D Guest
Waking Times
It is nauseating to watch CNN shill Jake Tapper trying to use neuro-linguistic programming (NLP) on (D) Rep. Alan Grayson. Every time Tapper asks Grayson a question, Tapper nods his head in the direction of the answer he wants the viewer to believe as the ‘truth’ thus trying to persuade public opinion. This is how the mainstream media operates and why you should never trust them.
What Is Neuro-Linguistic Programming?
Neuro-linguistic programming (or NLP) is a controversial interpersonal communication model applied in psychotherapy and other contexts of communication and change. It was initially co-created by Richard Bandler and linguist John Grinder in the 1970s based on the communication and behavioral patterns acquired from gestalt therapist Fritz Perls, family systems therapist Virginia Satir and psychiatrist Milton H. Erickson. The originators emphasize modeling of excellence as the core methodology of NLP, that is, the methods they used to imitate and produce the models of exceptional communicators. They also claim that the basic assumptions of NLP draw from aspects of neurology (“neuro-”), transformational grammar (“linguistics”) and cybernetics (“programming”). It has often been promoted as an art and science of effective communication and defined as ‘the study of the structure of subjective experience’. Others put more emphasis on the tools, techniques and applications specific to contexts such as psychotherapy, business management and communications training, motivational seminars, personal development, and teaching.


Right from Tapper’s initial comment, you can see him shaking his head “no” when he’s saying, “One lawmaker who outright opposes(shakes head no) intervention…”
“Is there anything the administration could say (nods head “yes”) at this point to convince you to support an air strike.”
“You bring up the issue of national interests here, VITAL national interests. The President (nods head yes throughout this sentence), on PBS, was talking about the U.S. interests…”
“In your opinion, is the President wrong (shakes head “no”), that a chemical attack on the people in Syria does not threaten(nods head “yes”) U.S. national interests…”

“100,000 people in the Syran conflict… by some reports, at least 350 people killed in what the administration (nods head yes”)says was a chemical weapons attack, is standing by and doing nothing (shakes head “no”) really an option?”
“To be clear, it’s the administration that’s saying the evidence is undeniable (nods head “yes”) of a chemical attack.
If the U.N. inspectors come back and say it was a chemical attack (nods head “yes”) in this town…”
Even Tappper’s body posture is leaning to the “left” suggesting Grayson is a left-winger.
This is similar to the “head nod” that car salesmen will use on you in order to control the conversation as well as your response. The car salesman will ask you questions that are most likely to be answered “Yes” by the potential customer. When it comes down to asking you if you would like to purchase the car, your mind has already been conditioned to say “Yes”.
FOX News Sean Hannity BUSTED for using NLP
A classic case of NLP was observed when FOX News shill Sean Hannity questioned University of Wisconsin Professor Kevin Barrett regarding 911.


Your Television, Newspaper and Radio News Is State Sponsored Propaganda
The nightly news has been proven to be manipulated by the CIA in order to persuade public opinion while supporting state sponsored propaganda.  Your best bet is to not watch or believe anything you see on TV and to go to alternative news sources, such as In5D Alternative News, for the news that the mainstream media fails to report.


I highly recommend How To Deprogram Yourself because many of your family and friends have been indoctrinated into this system of control for way too long. These are the same governments who are responsible for poisoning our water, air and food supplies, all in the name of eugenics and rarely, if ever, work in humanity’s best interests. I would also recommend Global Unity Project: What The World Needs Right Now because it provides viable solutions to all of these issues.


About the Author
Gregg Prescott, M.S. is the author and host of In5D.com, where this article was originally featured. Please visit his excellent and inspiring website.
This article is offered under Creative Commons license. It’s okay to republish it anywhere as long as attribution bio is included and all links remain intact.
~~ Help Waking Times to raise the vibration by sharing this article with the buttons below…

» Gregg Prescott ~ Are You An Old Soul?
» Gregg Prescott: Interpreting Edgar Cayce’s Failed Predictions
» Gregg Prescott, M.S – Wake Up Humanity! – Confirmed By Two Sources – This Is Our Last Chance – 5-31-14
» How To Step Away From the Programming - Bruce Lipton and Gregg Braden
» WakingTimes – Dave Mihalovic – Children Worldwide Are Contracting The Very Diseases They are Being Vaccinated Against – 2 February 2013