Rate This
Miranda Prynne
The Telegraph, UK
Thu, 05 Dec 2013 11:41 CST
Experts were baffled after video footage emerged of a glowing “alien-like creature” swimming in Bristol harbour.
Stunned eyewitnesses filmed a mystery luminescent, tentacled being, which was flashing a variety of colours, floating close to the top of the water
Videos of the strange marine object in the city’s historic docks were posted on Youtube and Twitter with many claiming to have seen an alien.
Marine biologists admit they are baffled, but claim the footage could be a marine salp which had drifted off course by the weather.
Dr Steve Simpson, from the School of Biological Sciences at Bristol University, said: “It’s very intriguing, I don’t really know what to make of it. 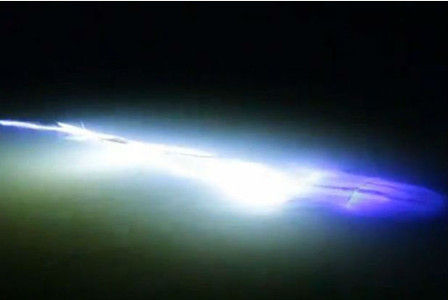 What the…?!
“There is a possibility that it is a special type of jellyfish or a marine salp. It’s very unusual and I haven’t really seen anything like it before though.
“What makes it even more unusual is that fact that it showed up in the middle of a really busy area.
“There are various marine animals that have biological illuminating abilities and they are able to make themselves flash.
“It is entirely possible that it is a marine creature which has been brought into the harbour because of the storms or maybe it was trying to shelter from the stormy seas.
“We are currently experiencing spring tides too which may have dragged whatever this is in from the sea.
“This is either a very interesting animal or someone’s very cool interpretation of a marine creature.
“It looks really cool – it’s incredible. I don’t know if it will make a return tonight but I’m sure if it does it will be met by an eager crowd.”
It is not known what the creature was and whether it was alive or not.
Dozens of people were left mystified after spotting the creature and capturing it on camera. 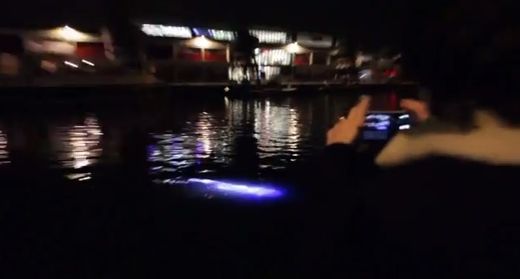 Alex Gordon-Lennox, 22, said: “It was just floating down the harbour. I’ve never seen anything like it before.
“I only noticed it because it was flashing and was so bright. I was out with some friends that night so we watched it travel down the water a bit and then it just seemed to disappear.
“It looked a bit like a jellyfish or a squid or something. It was amazing.”
Andrew Spooner, a software engineer from Bristol, tweeted a photo on Tuesday night and wrote: “Some weird craziness swimming around in #bristol harbour. Looks alien…”
He said: “The creature looked very organic, and it moved fluidly through the water as if it were a creature rather than say a machine that someone had made to look like jellyfish.
He added: “I had just been for dinner with a few friends when I saw a group of about a dozen people huddling next to the waters edge.
“When I wondered over, I saw the glowing creature which was pulsating and after about 20 seconds, it stopped glowing and disappeared.”
http://www.sott.net/article/269605-Large-glowing-pulsating-fish-like-creature-filmed-in-Bristol-harbour

» It's A Bird, It's A Fish!!! It's BOTH!!! New Creature Discovered???
» That Time A Police Helicopter In Bristol Filmed A UFO And Released The Footage
» A large extremely bright white light caught on video in Bristol, Pennsylvania
» UFO News ~ Strange Light Filmed Pulsating Within The Cloud Over Vegas Strip plus MORE
» Weird creature filmed by fishermen in Thailand