Latest topics
» Number of Injuries Reported to CDC After COVID Vaccines Climbs by Nearly 4,000 in One Week

I suppose this springs from the need to prove the out of Africa theory. He was not E1b1b which would suggest he was khazar like Hitler. Adolf Hitler, Chancellor of Germany from 1933 to 1945, is believed to belong to Y-DNA Haplogroup E1b1b1
Napoleon Bonaparte belonged to haplogroup E1b1b1c1* (E-M34*
Nelson Mandela, former President of South Africa, belonged to Haplogroup E1b1a (Y-DNA)
http://rhnegativebloodsecrets.blogspot.com/2012/12/ramesses-iii-haplogroup.html
King Tut belonged to Y-DNA haplogroup R1b1a2, as is almost everyone in Ireland and Scotland.
Louis XIV of France belonged to haplogroup Haplogroup R1b (Y-DNA)
Many Rh negative women are coming forward with their experiences of having been given the Anti D vaccination when they were pregnant. Many are saying that their children have autism and all kinds of other health problems, that they feel were caused by having this injection in the first place. In some cases it wasn’t even necessary, as both the Mother and Father were Rh negative.
http://rhnegativebloodsecrets.blogspot.com/2012/12/enforced-immunization-of-all-rh.html
Nicholas II of Russia, was assigned to mtDNA haplogroup T
The haplotype of Nicholas II of Russia has been predicted to belong to R1b.[36][37]
It matched a member of another line of Nicholas I’s descendants. So, all the Emperors from Nicholas I to Nicholas II shared this Y-DNA. It can also be said that this result is German-specific, so Paul I was most likely the real son of his official father Peter III, and not the son of a lover, as was speculated.

It also allowed to validate the remains of Alexei, son of Nicholas II.
The Jeffersons belong to Haplogroup T
http://dublinsmick.wordpress.com/2013/09/12/unbelievable-underwater-photos-of-atlantis-off-cuba-pyramids-are-3-times-the-size-of-cheops-cayce-was-right-there-was-a-polar-shift/
http://www.redicecreations.com/specialreports/2006/05may/atlantisDNA.html

DNA evidence for Atlantis
Beyond the Bering Strait – DNA Evidence Rocks the Boat
2006 05 21
By Will Hart | genesisrace.comArticle received from Light Eye 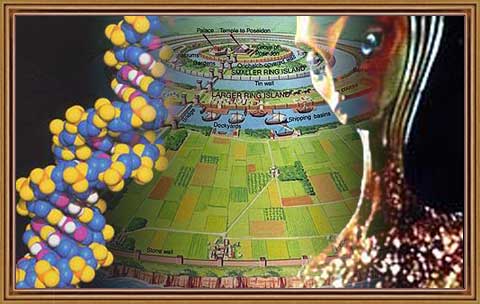 Now, we must pick up the trail of clues on the other side of the Atlantic. Let us keep in mind that when Cayce gave this reading DNA had not yet been discovered and there was no such thing as mtDNA analysis. Nevertheless, he mentioned “evidences” in two specific locales, the Pyrenees, a mountain range sandwiched in between France and Spain where the Basques live, and Morocco where another ancient group, the Berbers resides. Astonishingly, these two populations contain the highest frequencies of the X lineage found in Europe and North Africa.
The Basques have long puzzled anthropologists, linguists and historians because, although they are Caucasian they do not fit in with the rest of the European populations. Their language is not related to any other tongue in the world. Prior to the advent of genetic research tools investigators used the ABO blood groups to study the relationships between human populations as well as their migration patterns. The Basques turned out to be unique in terms of blood types as well. As a population they contain the highest levels of Rh- ‘O’ negative blood in the world and among the lowest type B.
Now, what Cayce was suggesting is that some of the people that fled the sinking continent went west and settled and became the Iroquois. Others went east to the Iberian Peninsula then the Pyrenees (Basques), and the West Coast of North Africa then the Atlas Mountains (Berbers). Turning to the Berbers we find yet another group that contains the highest frequency of haplogroup X in the world. Is it a coincidence that these disparate peoples share a very rare mtDNA lineage?
It is unfortunate that the Berbers have never received much attention from science over the years. Here we have a Caucasian race living in North Africa of all places. Anthropologists dismissed them because they did not fit well into the ‘Out of Africa’ scenario and it was assumed that they had back immigrated southward from somewhere in Europe. However, that theory has been abandoned and scientists now accept the fact that they are an indigenous people, which they believe go back to the Stone Age. But how can this be we must ask since the rest of the continent below the Sahara is black African?
Article from: http://www.genesisrace.com