OUT OF MIND » CHANGING ENVIRONMENT & NATURE » GUIDE TO THE NIGHT SKY »  Get ready! A Tetrad of Lunar Eclipses, Starting in April

Get ready! A Tetrad of Lunar Eclipses, Starting in April 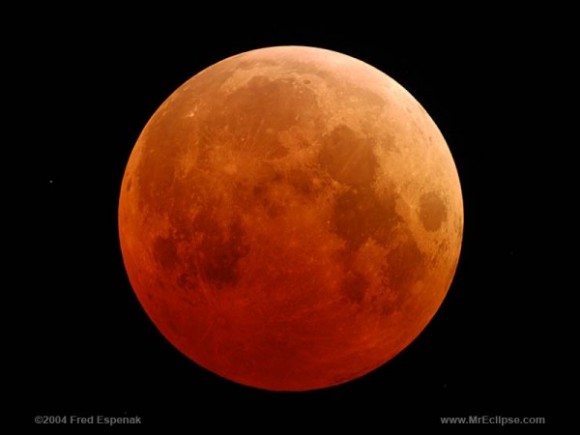 This is what a total eclipse looks like. This is the total eclipse of October 27, 2004 via Fred Espenak of NASA. Here’s why the moon turns red during a total eclipse.
Earth Sky
A total lunar eclipse on April 15th marks the beginning of a remarkable series of eclipses, all visible from North America.
For people in the United States, an extraordinary series of lunar eclipses is about to begin.
Related video clip:

VIEW: A Tetrad of Lunar Eclipses Coming Up!
The action starts on April 15th when the full moon passes through the amber shadow of Earth, producing a midnight eclipse visible across North America. So begins a lunar eclipse tetrad — a series of 4 consecutive total eclipses occurring at approximately six month intervals. The total eclipse of April 15, 2014, will be followed by another on Oct. 8, 2014, and another on April 4, 2015, and another on Sept. 28 2015.

Click to view a complete visibility map of the April 15th lunar eclipse.
Total lunar eclipse for the Americas on night of April 14-15
What is a Blood Moon?
“The most unique thing about the 2014-2015 tetrad is that all of them are visible for all or parts of the USA,” says longtime NASA eclipse expert Fred Espenak.
On average, lunar eclipses occur about twice a year, but not all of them are total. There are three types:
A penumbral eclipse is when the Moon passes through the pale outskirts of Earth’s shadow. It’s so subtle, sky watchers often don’t notice an eclipse is underway.
A partial eclipse is more dramatic. The Moon dips into the core of Earth’s shadow, but not all the way, so only a fraction of Moon is darkened.
A total eclipse, when the entire Moon is shadowed, is best of all. The face of the Moon turns sunset-red for up to an hour or more as the eclipse slowly unfolds.
Usually, lunar eclipses come in no particular order. A partial can be followed by a total, followed by a penumbral, and so on. Anything goes. Occasionally, though, the sequence is more orderly. When four consecutive lunar eclipses are all total, the series is called a tetrad.
“During the 21st century, there are 9 sets of tetrads, so I would describe tetrads as a frequent occurrence in the current pattern of lunar eclipses,” says Espenak. “But this has not always been the case. During the three hundred year interval from 1600 to 1900, for instance, there were no tetrads at all.”
The April 15th eclipse begins at 2 AM Eastern time when the edge of the Moon first enters the amber core of Earth’s shadow. Totality occurs during a 78 minute interval beginning around 3 o’clock in the morning on the east coast, midnight on the west coast. Weather permitting, the red Moon will be easy to see across the entirety of North America.
Why red?
A quick trip to the Moon provides the answer: Imagine yourself standing on a dusty lunar plain looking up at the sky. Overhead hangs Earth, nightside down, completely hiding the sun behind it. The eclipse is underway.
You might expect Earth seen in this way to be utterly dark, but it’s not. The rim of the planet is on fire! As you scan your eye around Earth’s circumference, you’re seeing every sunrise and every sunset in the world, all of them, all at once. This incredible light beams into the heart of Earth’s shadow, filling it with a coppery glow and transforming the Moon into a great red orb.
Mark your calendar for April 15th and let the tetrad begin.
Read more: Earth Sky

OUT OF MIND » CHANGING ENVIRONMENT & NATURE » GUIDE TO THE NIGHT SKY »  Get ready! A Tetrad of Lunar Eclipses, Starting in April