Nick Pope, an expert on UFO sightings and former government adviser, said he believed
the circle may be a swarm of insects in the sky.
April 15, 2014 – ENGLAND - Weather experts have been baffled by a black ring which appeared in the sky above Leamington Spa on Friday evening.
Schoolgirl Georgina Heap was playing tennis with her mother Jo Heap when she looked up at the sky near Warwick castle and saw a mysterious black ring.
She photographed the circle on her iPhone but so far, no one can explain the origin of the strange black mark.
The ring remained in the sky for around three minutes before disappearing completely.

Georgina Heap, 16, took the photograph on her iPhone on Friday evening. The ring was
seen in the sky above Leamington Spa, near Warwick castle.
The circle resembles a giant smoke ring but Warwickshire Fire and Rescue service said that there had been no reports of fire at the time of the sighting.
The Met Office said that the ring did not appear to be weather-related.
Nick Pope, an expert on UFOs and a previous government adviser on unexplained phenomena, said he believed the circle to be ‘organic’.
He said: ‘It’s a truly bizarre image. It looks like a smoke ring, but I can’t see where it could have come from.
‘Other alternatives would include some sort of unusual meteorological phenomenon

The black circle appeared in the sky near Warwick castle. It stayed there for around three minutes
before vanishing. The local fire service said it had received no reports of fire on Friday evening.
‘One other possibility is that the shape is made up of millions of bees or other insects, but I’ve never heard of insects behaving in this way before, so if this is the explanation, it’s a real-life X-File.’
Miss Heap, who is studying for her GCSEs, described the circle as ‘the weirdest thing I have ever seen’.
WATCH: Schoolgirl videos strange black ring in the sky.

Posts : 59
Join date : 2014-04-16
Strange, yes, however this is a "Real-Life Smoke Ring", not a "Real-Life X-File", nor is it an "AERIAL ANOMALY". Search "burning man smoke ring". Mysterious Black Ring UFO. Sigh... why does stuff like this get OMG web space energy attached to it so readily?

Admin
Posts : 106860
Join date : 2012-01-04
Location : Woodstock Nation
I post because it is cool no matter its origin. I have never seen a real life smoke ring but now I can say I have seen a pic of one. But here is more info and thanks David. Love it!


Mysterious black ring UFO in England not so mysterious after all

Posted by: Alejandro Rojas April 15, 2014 1 Comment 7,311 Views
A mysterious picture of what looks like a black ring of smoke above the town of Lemington Spa in England taken on Friday has been making news this week. However, the BBC confirmed today that what has been dubbed the “Black Ring of Lemington Spa,” is actually a black ring of smoke.
The phenomenon is known as a ring shaped vortex. A common example is a smoke ring like the one blown by Bilbo Baggins in the video below.


Doubtful News’ Sharon Hill tweeted us an article she posted with links explaining how a ring vortex is made. Boiled down, as far as I understand, they are created when smoke is forced out of a circular opening. In this video a fireball generator creates a large black ring that hangs in the air for quite some time.


The ring in this video is similar to what witness say they saw in Lemington Spa. 16 year-old Georgina Heap took the picture with her iPhone. 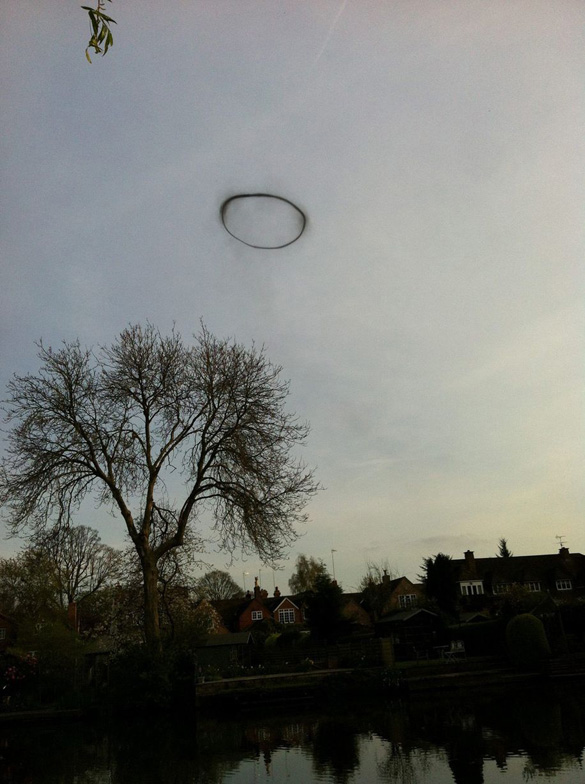 I looked up at it and thought ‘what the hell?’, it was amazing. It was just floating there like a cloud and then it disappeared. It wasn’t birds either. There were about ten of us who stopped what we were doing and watched.

Although the Black Ring of Lemington Spa was suspected to be a smoke ring, local fire and rescue services had said there were no fires in the area. Local weather services also said the ring was not weather related.
The Daly Mail spoke to UFO expert Nick Pope who told them, “It’s a truly bizarre image. It looks like a smoke ring, but I can’t see where it could have come from.”
He suggested that perhaps the ring was made by millions of bees or insects, although he says, “I’ve never heard of insects behaving in this way before, so if this is the explanation, it’s a real-life X-File.”
The answer as to the genesis of the smoke ring finally came earlier today from the BBC. A spokesperson from nearby Warwick Castle said they had been testing “fire effects” on Friday. The tests were related the daily firing of their Trebuchet Fireball. According to the following video it is the “biggest trebuchet in the modern world.”


The spokesman said, “We’ve seen a number of different effects, including the vortex images that have been reported. As yet we don’t know what causes the phenomenon but it’s certainly a spooky spectacle.”
A thorough explanation of what causes the ring-shaped vortices phenomenon can be found at Caelestia.be, a website dedicated to researching unidentified aerial phenomena.
Thanks to Sharon Hill for a heads up on the links to the other ring-shaped vortices, sans the Bilbo and Gandalf one. That was my idea.