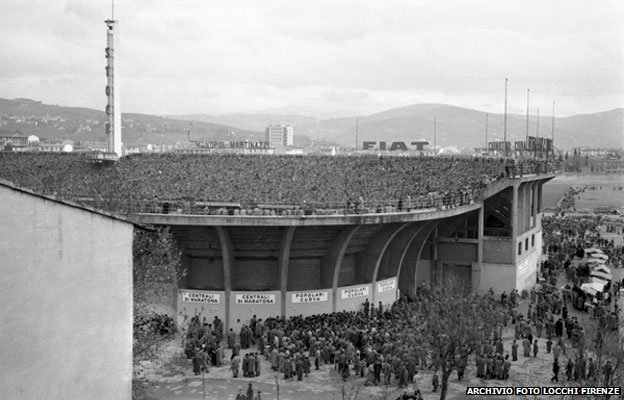 .
Sixty years ago a football match ground to a halt when unidentified flying objects were spotted above a stadium in Florence. Did aliens come to earth? If not, what were they?
It was 27 October 1954, a typically crisp autumn day in Tuscany. The mighty Fiorentina club was playing against its local rival Pistoiese.
Ten-thousand fans were watching in the concrete bowl of the Stadio Artemi Franchi. But just after half-time the stadium fell eerily silent – then a roar went up from the crowd. The spectators were no longer watching the match, but were looking up at the sky, fingers pointing. The players stopped playing, the ball rolled to a stand-still.
One of the footballers on the pitch was Ardico Magnini – he was something of a legend at the club and had played for Italy at the 1954 World Cup.
“I remember everything from A to Z,” he says. “It was something that looked like an egg that was moving slowly, slowly, slowly. Everyone was looking up and also there was some glitter coming down from the sky, silver glitter.
“We were astonished we had never seen anything like it before. We were absolutely shocked.”
SOURCE
http://www.bbc.co.uk/news/magazine-29342407
.

.
What 10,000 witnesses saw that day, proves Free Energy is possible.
It then becomes very easy to understand why our world today is like it is.
Antigravit​y technology​, Free Energy, and other Dimensions​, Spirituali​ty, are all going to meet and converge.
Because its all Science, physics.
But not the 20th century Physics lies.
Theyve kept us dumb.
Disclosure i​s coming.
. 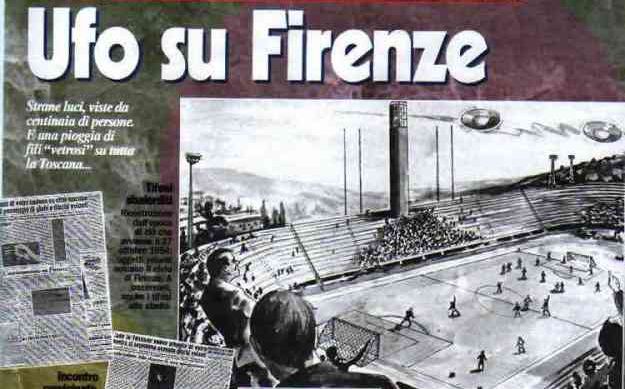 Thanks to Hatter at: http://outofthisworldx.wordpress.com

Well as a state sponsored broadcaster (TV licence in 2014?) the content they produce can be slick and professional, yet blair infested it from the top down with fellow left thinking latte drinking apatchniks. The blair broadcasting corp became a little to smug for the tastes of many until........the pedophile stories broke. Yet something just isn't right about any of it, why wait until he is dead and cannot answer?

As a state broadcaster with a bunch of muppets in Parliament pulling the strings (threat to the TV license freebie) the muppets would welcome any "shiny things" they feel would distract the masses away from the mess they have created and the coming clash with the EU. The state broadcaster might like a break about reporting stories about itself as well.

Most people I talk to here watch or listen to BBC or SKY (Murdochs satellite tv) for local news or highlights, if there any real news going on in the world we like the truth so we go to Russia today or Al Jeezera English. The Russians and the Arabs without the tv tax produce reports worth seeing, BBC and SKY might show a cute puppy instead

To divert attentio0n from the pedophiles crawling out from the woodwork! Makes perfect sense.

» MUFON - Eight Alien Disclosure Efforts Currently Underway, Including the Disclosure of a Portal
» Medical Professionals Start Providing Alternative Health Services Through Private Membership Associations
»  http://nesara.co/:"All of the information on this website has been provided by the KOS. Please share this widely. There have been many websites on NESARA providing disinformation. This is a Divine Gift. The TRUTH about N.E.S.A.R.A. Law".
» Iraqi Government Signs $1 Billion Military Agreement With Russian Government: Providing Heavy Artillery, Ballistic Missile Systems And Ammunition.
» Citizen Hearing on Disclosure - CLOSING REMARKS - Entering the Post-Disclosure World... Together