OUT OF MIND » THE INSANITY OF REALITY » GOVERNMENTS & THE NEW WORLD ORDER » Journalists Arrested, Beaten, Raided, and Held At Gunpoint By Police During NATO Protests

Journalists Arrested, Beaten, Raided, and Held At Gunpoint By Police During NATO Protests

Journalists Arrested, Beaten, Raided, and Held At Gunpoint By Police During NATO Protests Sun May 27, 2012 10:06 pm

Journalists Arrested, Beaten, Raided, and Held At Gunpoint By Police During NATO Protests 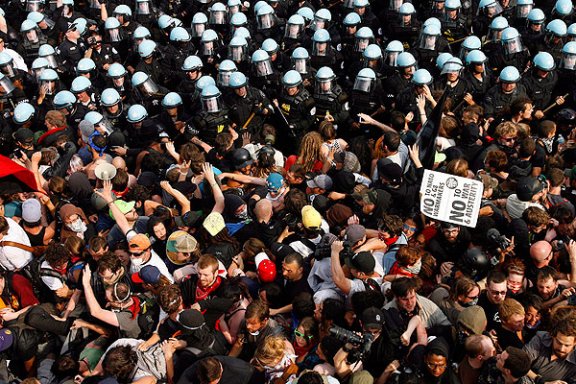 In the first video below, CNN anchor Don Lemon watches in disbelief as riot police repeatedly and indiscriminately beat anyone within arms reach.
In the second video, a CNN camera is in perfect position to film one of many instances of the police burrowing throwing entire crowds in police vans and running over protestors.
After going through previous media blackouts on police overreach and brutality during Occupy protests, it’s an optimistic sign to hear a mainstream reporter in shock over the beatings of protesters by police.
As noted here yesterday, earlier this year the United States plummeted in the World Press Freedom Index, due to numerous journalists being beaten, intimidated and/or arrested by officers – and the beat goes on.

A report from The Huffington Post documented the numerous journalists who were attacked and injured by storm trooper type, power hungry police.


Several journalists were arrested and injured while covering the protests against the NATO summit in Chicago on Saturday and Sunday.
As thousands of anti-NATO protesters met thousands of police officers in the streets, photographers found themselves repeated targets of the CPD.
On Sunday, Getty photographer Scott Olson was bloodied after being hit with a police baton. A picture of Olson with blood streaming from his head rocketed around the Internet. The National Press Photographers Association also highlighted the arrest of Joshua Lott, a freelance photographer with Getty.
Tracey Pollock, a photographer with the Minnesota-based outfit The UpTake, posted video on Saturday that showed police waving their bicycles around to keep protesters back. At the end of the video, a police officer appears to shove Pollock’s camera out of control. A report on the site said that the officer proceeded to push her over some bicycles, and that she was bruised as a result.
Another photographer, Paul Weiskel, posted video that showed an officer forcefully shoving a bicycle into his stomach.
NBC Chicago reported on Monday that a group of independent journalists had also been detained at 2 AM by police officers. In the video, police can be heard telling the group to show them their “f—ing hands.” Some of the reporters were handcuffed, and their hard drives and cameras were smashed.


Finally, Russia Today reports that even with the corporate media attention that was given, the media coverage failed to come close to presenting a clear picture of the events on the ground

OUT OF MIND » THE INSANITY OF REALITY » GOVERNMENTS & THE NEW WORLD ORDER » Journalists Arrested, Beaten, Raided, and Held At Gunpoint By Police During NATO Protests