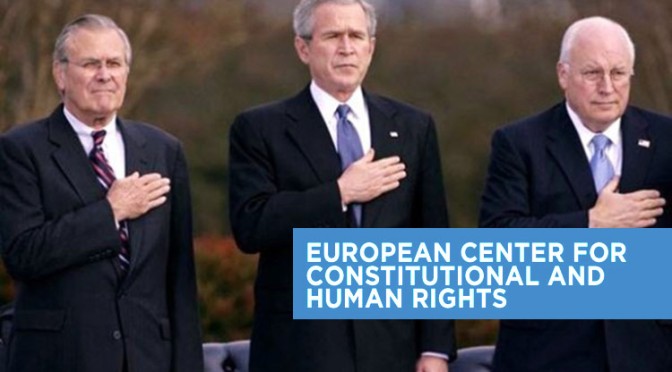 If President Obama won’t do it, someone else will. Thankfully, a human rights group in Berlin, The European Center for Constitutional and Human Rights, has begun the process of indicting members of the Bush Administration by filing criminal complaints against the architects of the Admin’s torture program.

Calls for an immediate investigation by the German human rights group was started after outrage ensued on the case of a German citizen, Khalid El-Masri, who had been captured by CIA agents in 2004  because of a mistaken identity mix-up and was tortured at a secret prison in Afghanistan.
Wolfgang Kaleck, the general secretary of the European Center for Constitutional and Human Rights, said:
“By investigating members of the Bush administration, Germany can help to ensure that those responsible for abduction, abuse and illegal detention do not go unpunished.”
In an interview with “Democracy Now,” Michael Ratner, president emeritus of the Center for Constitutional Rights and chairman of the European Center for Constitutional and Human Rights, said that he believes Cheney, among others, have no defense for torturous actions and should be indicted:
“I strongly disagree that Bush, Cheney, et al., would have a defense. This wasn’t like these memos just appeared independently from the Justice Department. These memos were facilitated by the very people — Cheney, etc. — who we believe should be indicted. This was part of a conspiracy so they could get away with torture. But that’s not the subject here now.”
“Secondly, whatever we think of those memos, they’re of uselessness in Europe. Europe doesn’t accept this, quote, ‘golden shield’ of a legal defense. Either it’s torture or it’s not. Either you did it or you didn’t. And that’s one of the reasons, among others, why we’re going to Europe and why we went to Europe to bring these cases through the European Center.”
Ratner then hit the nail on the head regarding America’s dangerous exceptionalism path down the road:
“But, of course, you know, Cheney just showed us exactly why you have to — have to prosecute torture. Because if you don’t prosecute it, the next guy down the line is going to torture again. And that’s what Cheney said: ‘I would do it again.’”
Khalid El-Masri was on vacation in Skopje, in Macedonia, when he was pulled off of a bus by government agents, sodomized with a drug, and taken to the secret base that was identified only as Cobalt in the CIA torture report. After four months, and after the United States learned of the mistaken identity, they left him there and continued to torture him. They held him further because the U.S. realized they had been torturing the wrong man. Afterwards, they released him, dropping him off somewhere to resume his life.
El-Masri in his own words, in the same interview with “Democracy Now:”
[translated] I was the only one in this prison in Kabul who was actually treated slightly better than the other inmates. But it was known among the prisoners that other prisoners were constantly tortured with blasts of loud music, exposed to constant onslaughts of loud music. And they were—for up to five days, they were just sort of left hanging from the ceiling, completely naked in ice-cold conditions. The man from Tanzania, whom I mentioned before, had his arm broken in three places. He had injuries, trauma to the head, and his teeth had been damaged. They also locked him up in a suitcase for long periods of time, foul-smelling suitcase that made him vomit all the time. Other people experienced forms of torture whereby their heads were being pushed down and held under water.
He finished the interview with some pretty damning words that should make George Bush, Dick Cheney, Condoleezza Rice and Donald Rumsfeld shudder:
“And let me just say, Germany — whatever happened before, between the NSA spying on Germany and the fact that their citizen has now been revealed to have been kept in a torture place, when it was known that he was innocent, I’m pretty sure that Germany is going to take this very seriously.“
source »
We can help bring down the Cabal and defeat the Depopulation Agenda
Big Pharma is one of the sources of funds for the Cabal. It also serves as the weapon of mass destruction via vaccine tainted with live virus it is suppose to protect us from, and the deadly chemicals use to treat our diseases that they caused through our GMO / pesticide contaminated food supply.
We can avoid using drugs, defeat any viral attack and scaremongering easily by knowing how to build our own comprehensive antiviral system. Find more about it here. 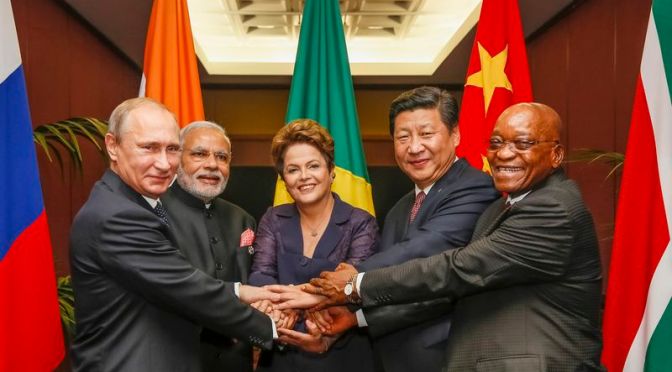 BRICS + Germany: What are they cooking?

Winston Churchill once said, “I feel lonely without a war.” He also badly missed the loss of empire. Churchill’s successor – the ‘Empire of Chaos’ – now faces the same quandary. Some wars – as in Ukraine, by proxy – are not going so well.