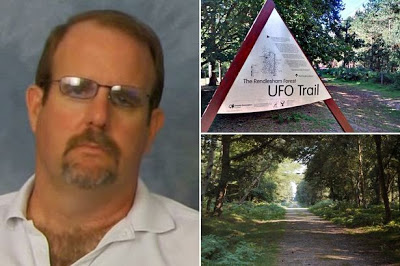 An American airman has won a legal bid to force military health chiefs to pay for the treatment of an illness allegedly caused by a UFO encounter in Suffolk.

Airman First Class John Burroughs was involved in an incident in Rendlesham Forest in December 1980 which has become known as "Britain's Roswell".

He was exposed to huge doses of radiation whilst investigating a mysterious craft and claimed this left him in need of "lifesaving" heart surgery.

After decades of being "stonewalled", he has finally persuaded the US Veteran's Association (VA) to pay for his treatment.

His lawyer hailed the dramatic legal about-turn as a "de facto" admission that UFOs exist and can cause "physical injury".

Burroughs told Mirror Online: "I was not looking for anyone to believe me.

"All I have been concerned about was getting care for my illness. That was all that mattered."

The Rendlesham Forest incident is one of the great unsolved UFO encounters of the 20th century.

Burroughs and a colleague Jim Penniston ventured from their base to inspect the UFO at close range, with Penniston describing a strange silver craft covered in symbols which resembled heiroglyphics.

But the real problems started in 2011, when doctors were astonished after the mithral valve of his heart had failed - something which usually happens to men much older than 50-year-old Burroughs.

"I couldn't work and was going downhill fast," he continued.

Neither Burroughs nor his doctor were able to access his medical records, which were classified.

Burroughs even claimed the Air Force denied he was employed with them at the time of the UFO incident.

He asked for the help of presidential candidate Senator John McCain, who was also unable to get his hands on all the medical records.

Finally, Burroughs' legal team found two documents from the British Ministry of Defence which showed high levels of radiation were detected at the site where he encountered the mystery UFO.

The US Veterans Association and Department of Defence then agreed to pay for his treatment.

"We had a very weird experience. There is clearly something strange going on."

"In citing the [MoD radiation documents] and in granting John Burroughs full disability for his injuries in Rendlesham Forest, the US Government has by de facto acknowledged the existence of unidentified aerial phenomena which, in John Burroughs' case, resulted in physical injury," Pat Frascogna said in an email.

Nick Pope, a researcher who spent several years investigating UFOs as a employee at the MoD, told us: "I think this development is hugely significant, whatever you believe about UFOs.

"One moment the US government was saying that nothing happened, but the next, John Burroughs and his attorney get hold of a formerly classified report that says John was probably irradiated by something in Rendlesham Forest."

However, Pope is still baffled about what exactly happened that December night in 1980. - British UFO encounter "gave me heart failure", says US airman after military chiefs agree to pay his medical bills 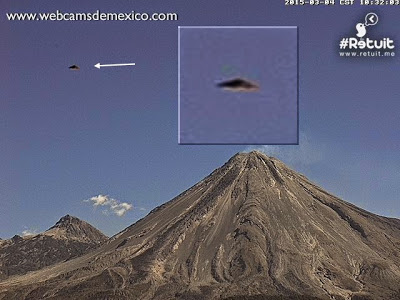 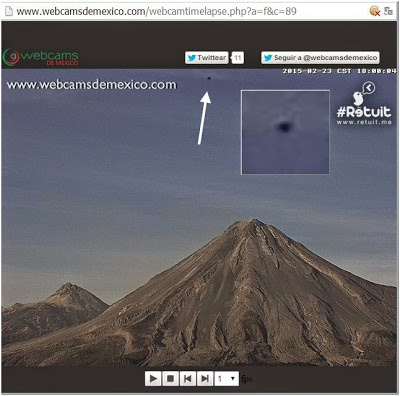 I check the WEBCAM photos of El Volcan de Colima (Colima, Mexico)daily. Today I discovered this triangular shaped UFO hovering beside the volcano. The other photos are of different sightings on different days. All photos are dated and time stamped. - MUFON CMS

My colleague David Garrison forwarded the following report from a witness in Wellston, Oklahoma:


I have a story for you! Last night I had to go outside to check our propane. It was right at about 1:45 am, the skies were completely clear over our house for the first time in almost a week. The snow was reflecting the moonlight brightly so there was no need for a flashlight. I looked up and was reveling in the ability to see the stars and the edges of the clouds receding from our area. I saw a dark shape with bright lights that were going in a "circular" pattern around a triangular shape. The triangle got closer and for a split second I thought about going back in the house then thought what the heck, they can get me from the house as easy as from outside.

I stood there and continued to watch this object approach. There was no sound, the temperature was somewhere in the low teens. The lights were green, blue, red and white going around the object which confirmed that it was triangular, but I describe the light sequence as "circular" simply because it was going around the outside of the "ship".

I was the only person awake in my family so there was no one to corroborate what I saw. The ship reminded me strongly of the one that my daughter and I saw a couple years ago.

It took about 3 minutes I think, absolutely no sound and as cold as it was if anyone had been speaking within a mile of the place I would have been able to hear every word.

I spotted it at one horizon and watched it all the way past the trees on the west side of the house.