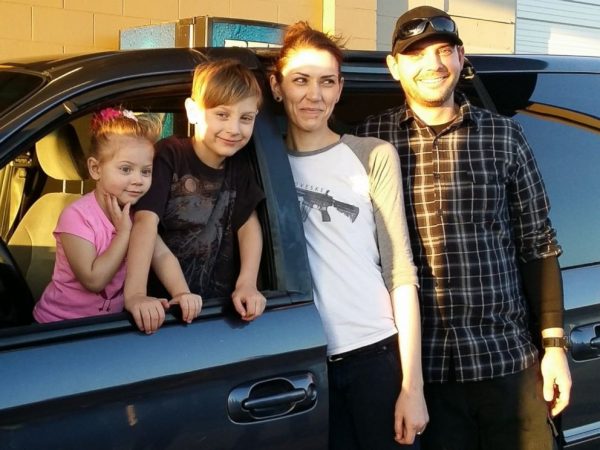 SM Gibson | ANTIMEDIA
REDWOOD, OR — Last week, Anti-Media reported about a six-year-old boy in Oregon who was publicly humiliated by his teachers for being one-minute late to school. This week, the community responded by donating a minivan to Hunter’s family.
1st grader Hunter Cmelo was isolated from his classmates during lunch and forced to sit behind a cardboard divider because of something that was completely out of his control. He was dropped off late to school because of persistent automotive issues with the family vehicle.
Hunter’s story went viral after his grandmother, Laura Hoover, posted a picture of her grandson eating lunch secluded from other students behind a cardboard divider.
“He was at the first table as you walk into the cafeteria, and he was just sitting there with one of those cardboard poster partitions in front of him … and two or three books next to him,” Hunter’s mom, Nicole Garloff said.
The photo caught the attention of local radio host, Bill Meyer, who decided he wanted to help solve the ‘root of the problem’.
‘I saw the school policy as being unjust, but I saw the root of the trouble was car trouble,’ he told ABC News.
Meyer recruited the assistance of a local vehicle repair shop, Kelly’s Automotive, to help repair the family’s Dodge Durango. It soon became apparent to shop owner, Lisa McClease-Kelly, that the cost of repairs would surpass what the vehicle was actually worth.
Rapid Repo and Collections then stepped up to the plate, and offered to donate a 2001 Chrysler minivan. Local businesses then raised the funds to fit the van with updated parts. Kelly’s Automotive also chipped in with an additional $1,400 worth of repairs and are providing one year of free oil changes to the van. 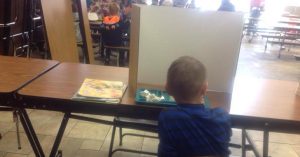 The photo which went viral of Hunter being forced to eat behind cardboard. Photo: Laura Hoover
When the family went to retrieve their automobile, they were under the assumption that they were picking up their old vehicle. They were surprised with their new van upon arrival.
“We thought we were going there to be told that our Durango was not going to be fixable at all,” Garloff said. “We were so shocked, it doesn’t seem real. I’m trying to tell Hunter that this doesn’t just happen to you.”
The family was also presented with a $100 gas card and two $60 gift cards.

Posts : 3471
Join date : 2012-02-10
Age : 64
Location : Florida
The new vehicle was a godsend to these poor people- The school administrators should all be fired for treating this child in that way-That little boy did not deserve that whatsoever-