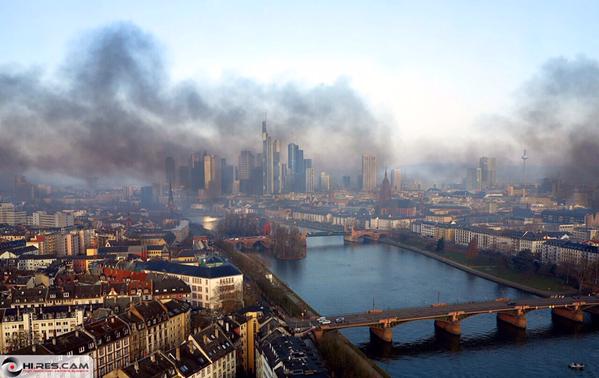 Images of burned police cars and bloody protesters have begun flooding social media. On the surface, protesters are obviously upset over the ECB building’s $1.4 billion price tag — at a time when the Eurozone suffers through a recession which has hit the working class exceptionally hard.
Other grievances include austerity measures, which are promoted by the banking class, but in reality are just a privatization of assets and resources which were initially funded with public money.
Essentially what this has become is a theft from the general public to collateralize finances that were thrown into uncertainty by politics and bad monetary policy in the EU.
Rather than the bureaucrats and bankers paying the price for their mismanagement, the European public is footing the bill for the bailouts, and that has rightfully upset many across the Continent. It’s estimated that roughly 10,000 protesters flooded Frankfurt streets, many coming from across Europe including from the banker victimized country of Greece.

IN 2012 THE GERMAN POLICE OFFICERS MARCHED WITH GERMAN CITIZENS [IT WAS A PEACEFUL MARCH] AGAINST ROTHSCHILD’S CENTRAL BANK!

At least 90 police officers have been injured trying to protect the banks, meanwhile over 100 protesters were injured and at least 350 have been arrested. Charges include arson, destruction of property, and disturbing the peace.
Central banks have long been criticized for policies which make the working class poorer while enriching the ruling class. The US has it’s own central bank called the Federal Reserve, which has been the subject of many protests in America as well.

Since the creation of the Federal Reserve, which is much older than the ECB, the US has seen an unprecedented shift of wealth from the middle-class to the Wall Street class. The same can be expected of the ECB.
TheAntiMedia.org