April 23, 2015 - CHILE - The record-breaking volcanic eruption in southern Chile is dramatically altering skies, as spectacular views emerge of white plumes creeping miles up into the sky after coloring the night orange. A second blast took place hours ago.

Nature’s colossal power was aptly demonstrated by Calcubo, which erupted a second time just a few hours ago, with agencies reporting a stronger eruption than the first.

An electrical storm mixed with the raging spurts of lava overnight to create what looked like the jaws of hell opening to swallow the surrounding landscape.

In scenes reminiscent of the movie Independence Day, white mushroom disks adorned the daytime skies, slowly claiming the city of Puerto Varas for their own.

Even rarer and arguably more precious-looking views opened up against the setting sun, as the white disks collided with its glow.

This is what the scene looked like in video.

For a few hours it looked as though Puerto Varas was entirely submerged beneath a menacing blanket of fire.

Breathtaking photography revealed the nighttime sky with its billions of stars, struggling against a mess of dark ash and debris.  - RT.

Pyroclastic flows occurred during the second eruption on the southeast flank, caused by partial collapse of the eruption column.

A large ash plume is moving northeast and has reached Villa Angostura and Bariloche in Argentinia where ash is now falling. In more nearby areas such as Ensenada (Región de Los Lagos), up to 40 cm of ash have been reported.

Spectacular images of the subplinian eruption column and plume at day and night, including volcanic lightning, are emerging everywhere on the net. 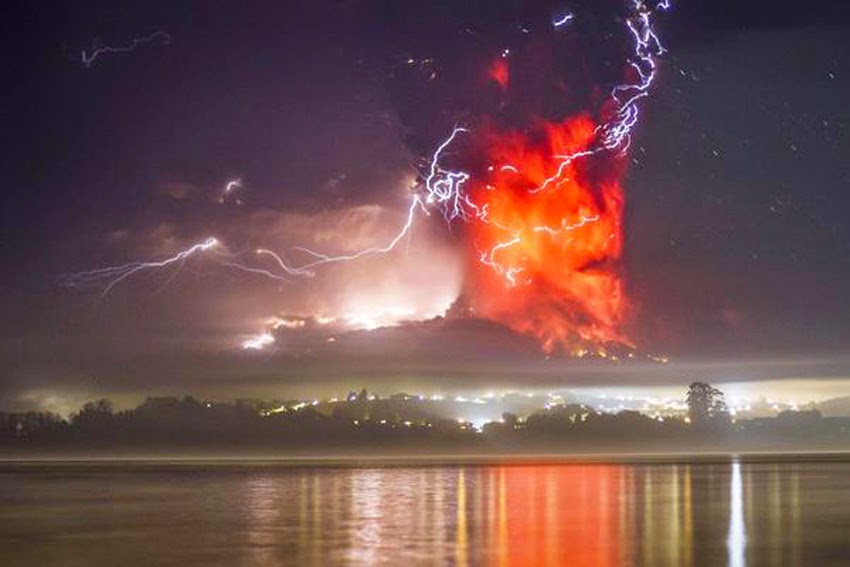 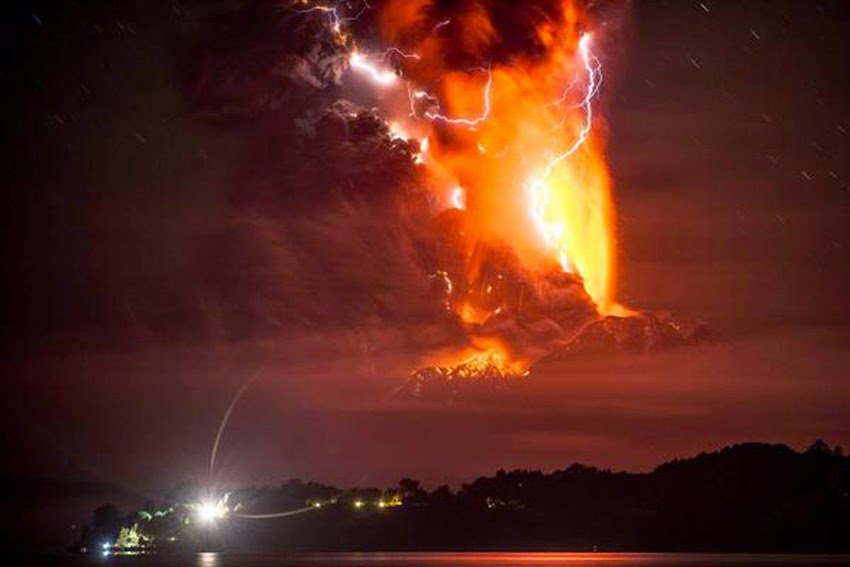 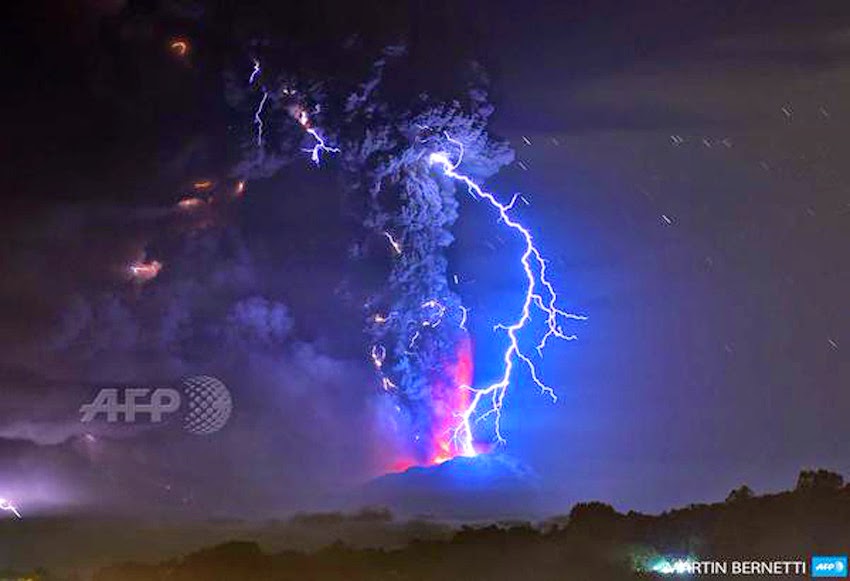 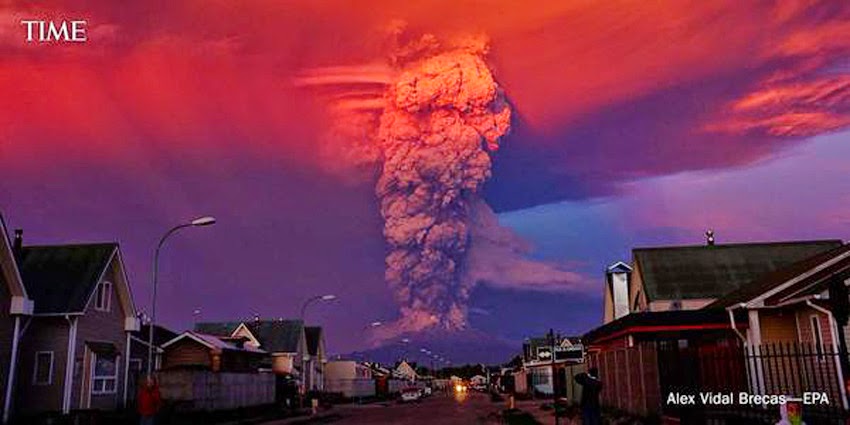 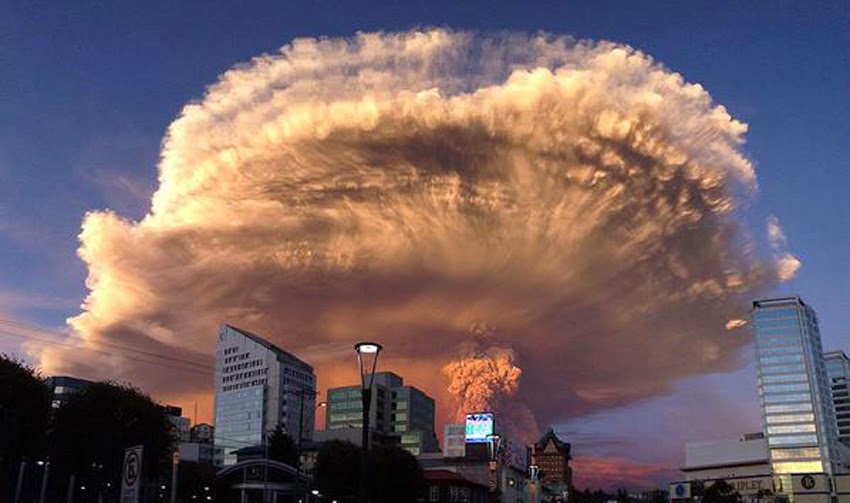 First pluse of eruption last evening:
The first eruption that had started 18:08 local time last evening followed only 2 hours of strong seismic activity recorded by Sernageomin, but otherwise came as a complete surprise.

Over 4000 people were evacuated or fled from an area within 20 km radius of the volcano during the first hours. 3 small towns are now deserted (Ensenada, Correntoso, Lago Chapo). Significant ash fall occurred in areas to the east and northeast of the volcano.

The airport of Puerto Montt is closed and flights are diverted to Valdivia. In the city itself, people tried frantically to refuel cars and stock up supplies, leading to traffic jams, empty supermarkets and chaos.

The first pulse only lasted about 2 hours and a lava flow could have been active by around 19:30, based on seismic signals from Sernageomin.  - Volcano Discovery.

April 23, 2015 - COSTA RICA - Costa Rica's Turrialba volcano erupted again Tuesday afternoon, producing a column of ash, gas, and water vapor that reached some 6,500 feet over the volcano's crater, according to the Volcanological and Seismological Observatory of Costa Rica (OVSICORI).

The eruption began at 4:04 p.m. and continued for 22 minutes, according to OVSICORI.

Constant seismic activity has been recorded at the volcano since Saturday, and local residents have reported a strong smell of sulfur for the last several days.

San Jose's Tobias Bolanos Airport announced a partial closure of the airport Tuesday evening due to potential ashfall, but was back to normal operation by Wednesday morning.

An eruption of similar magnitude most recently occurred on Tuesday, April 7th.

One of Costa Rica's most well-known volcanologists, Gino Gonzalez of the National Seismological Network (RSN), said in December that Turrialba could remain active and belching ash for as long as two years. - Inside Costa Rica.