OUT OF MIND » TRUTH IN CONSPIRACY THEORIES? » HISTORIES MYSTERIES » Researchers Discover What Was Located On Top Of The Great Pyramid In Egypt

Researchers Discover What Was Located On Top Of The Great Pyramid In Egypt Sun Apr 26, 2015 12:18 am

The investigations of renowned Spanish architect Miguel Pérez-Sánchez that lasted over ten years, allowed him to rebuild via computer models and with great accuracy, the pyramid of Cheops and determine that it was “crowned” by a sphere of 2 meters in diameter.
Pérez Sánchez announced his discovery in a publication of the book containing his doctoral thesis where he explained that “the pyramid of Cheops, according to analysis, demonstrates that it was an encyclopedia of knowledge.”
The Great Pyramid is the most important building of the Old Kingdom, it is one of the 7 Wonders of the Ancient World, the only one that remains standing today. Devoid of its original coating blocks of white limestone, the great Pyramid lacks its summit which gave the pyramid another 9 meters in height. Now, researchers know the exact shape of the object that was placed on top of the pyramid. 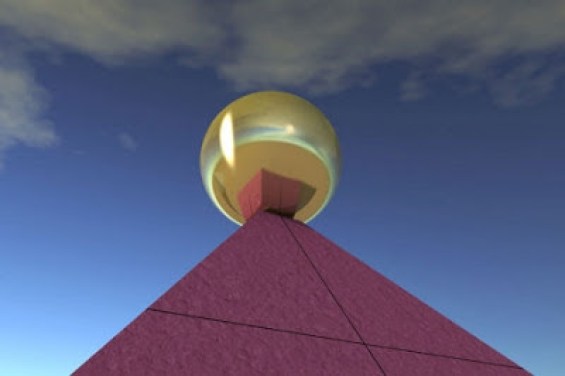 As proposed by Pérez-Sánchez, the sphere that the ancient Egyptians placed at the top of the pyramid symbolized the Eye of Horus and had a diameter of 2,718 royal cubits (2.7 meters), which is the accurate measure of the number e. The sphere located on the Pyramid was placed as a worship to the Sun and Sirius, the brightest star in the sky, which was associated with Isis.
Pérez-Sánchez had the support of a multidisciplinary team in his investigation, allowing him to construct a computer replica of the Great Pyramid like never before.
The three-dimensional drawing of the Great Pyramid has revealed its original measurements, analyzing it, allowed researchers to understand the historical significance of the monument. In addition of the sphere located on top of the pyramid, missing today, analysis enabled researchers to find out the inclination angle of 51,84º, the platform that supported the sphere with a pi perimeter of royal cubits; and the height of the pyramidal vertex of 277 778 cubits, equal to the quotient of dividing 1,000,000 between 3,600. According to Pérez-Sánchez, the discovery of the original shape and dimensions of the Great Pyramid, its reconstruction and analysis revealed an architecture made of pure mathematics, geometry, geodesy and astronomy.

The original surface of the pyramid, now in ruins, was 100,000 times the number pi (π) 3000 years ahead of the understanding of π.
The ancient Egyptians that planned the Pyramid had an incredible scientific knowledge, understanding the Pythagorean Theorem two millennium ahead of time, a precision in the definition of pi with 6 decimals 3 millennia ahead of its time, including the knowledge of the number e, and the accurate measures of the Earth, Sun and Sirius anticipated over 4 millennia.
The geodesic dependence of the Great Pyramid has been confirmed by scaling relations based on the sexagesimal system. The weight of the pyramid is estimated at 5,955,000 tons. Multiplied by 10^8 gives a reasonable estimate of the earth’s mass. It also represents the Sun’s Radius: Twice the perimeter of the bottom of the granite coffer times 10^8 is the sun’s mean radius. [270.45378502 Pyramid Inches* 10^8 = 427,316 miles]
Thanks to the astronomical data provided by Plutarch, researchers managed to place the incredible monument in its historical context understanding why Pharaoh Khufu had commissioned these incredible projects. 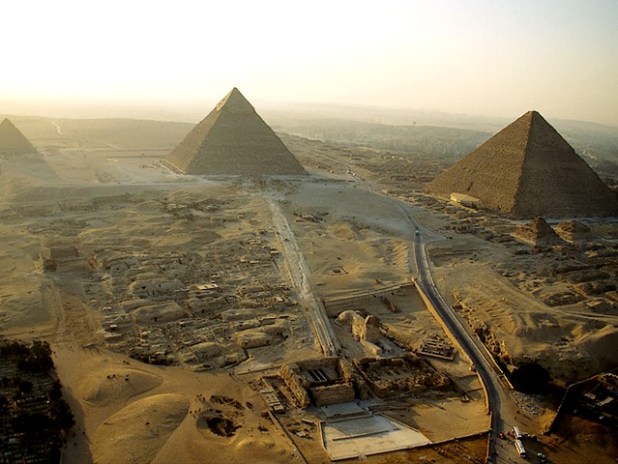 This is believed to be the reason why, Snefru, father of Khufu, built during his reign, three pyramids in search for the “perfect pyramid” which explains the efforts of the architects of the Pyramid, to include within the Great Pyramid, their knowledge of the past.
More importantly, Pérez-Sánchez mentions the great Sphinx in his work, stating that “the Great Sphinx is not contemporary with the pyramids that surround it, but it is the product of a much earlier civilization that shaped and carved it around the eight millennium BC.
( via ancient-code.com )

OUT OF MIND » TRUTH IN CONSPIRACY THEORIES? » HISTORIES MYSTERIES » Researchers Discover What Was Located On Top Of The Great Pyramid In Egypt