OUT OF MIND » THE INSANITY OF REALITY » FINANCIAL COLLAPSE » The Vacant Dead: The 50 US Cities With The Most “Zombie” Foreclosures 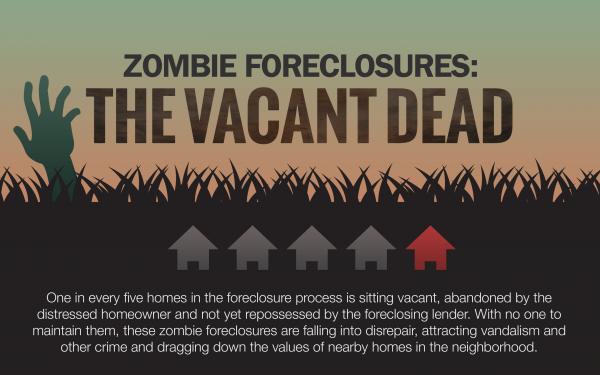 Over the past five years, first as a result of the 2010 robosigning scandal and then due to the natural build up of a massive backlog of cases in judicial states, which in some cases is well over 1000 days, America’s conventional house clearing mechanisms of foreclosure and bank repossessions had become clogged up to previously unseen levels.
Which was precisely how the banks wanted it: after all, by minimizing the supply of housing for sale, this served as an aritifical subsidy to the housing market. It achieved two things: it kept housing prices artificially high, and allowed millions to live in their house mortgage-free for years, while also providing a “spending stimulus” to millions who in lieu of spending cash on rent (or mortgage) could purchase discretionary items.
Five years later, however, with the stock market at all time highs and the housing recovery supposedly in full swing, albeit on an artificially inflated basis due to abnormally low inventory, the banks are starting to collect.
As the following chart shows, the foreclosure completion process has suddenly soared now that banks are finally evicting, and as a result REOs have surged 50% from a year ago to a 27 month high! Not what one would expect from a healthy, vibrant and “clearing” housing sector, it merely shows that the banks are now confident enough with the level of demand that they are happy to leak out far more of their accrued supply into the general market, something we dubbed “foreclosure stuffing” all the way back in 2012.
[url=http://www.zerohedge.com/sites/default/files/images/user5/imageroot/2015/06/foreclosure jump.png]

[/url]
What this means is that suddenly millions of Americans who had been allowed by their repossessing banks to squat unbothered, are about to find that in the real world if one can’t afford a house, one rents, or else finds a nice enough bridge under which to pitch a tent.
It also means that what the NAR has been complaining about for years, namely the lack of inventory, is about to become a horn of plenty, as millions of previously unavailable houses are put on the block, pushing the price of housing lower.
Most importantly, it means that if not done correctly the process may derail whatever vestige of a housing recovery the media wants the general population to believe is taking place, aside from Chinese hot-money launderers buying NYC triplexes all cash, sight unseen of course.
Nowhere will this reversal be more visible than in the places where not even the prospect of living mortgage free appealed to former homeowners.  According to RealtyTrac there were some 127,021 homes actively in the foreclosure process been vacated by the homeowners prior to a completed foreclosure, representing one quarter of all 527,047 properties in foreclosure. These owner-vacated foreclosure properties will likely end up as short sales, foreclosure auction sales or bank-owned sales, also known as even more supply.
These are the so-called “Zombie” foreclosures (not to be confused with “Vampire” foreclosures in which the owner continues to inhabit the foreclosed property).
According to RealtyTrac’s Darren Blomquist “as banks push through long-deferred foreclosures that are more likely to be owner-vacated this year, we are seeing a somewhat surprising increase in zombie foreclosures in markets with overall low foreclosure rates such as Los Angeles, Houston and Boston.”  Almost as if the housing recovery was not really a recovery but a giant game of extend and pretend.
And since Zombie foreclosures represent the purest form of housing unaffordability, one not perverted by the differential between a foreclosure start and a completion, but merely the dereliction of one’s former house without regard to one’s credit rating or any other consequences, the cities, MSAs and states where the “Zombie” problem is most acute is also those where the economic situation is getting worst the fastest.
Not surprisingly, among the states the highest zombie foreclosure rates were in New Jersey (one in every 210 housing units), Florida (one in every 324 housing units), New York (one in every 476 housing units), Nevada (one in every 495 housing units), and Indiana (one in every 574 housing units). It also goes without saying that the accumulation of such derelict and unsupervised properties will have a substantial downward impact on home prices.
So for those concerned if their city is among the top most frequented by this particular, and very unpleasant, breed of “zombies”, here are the top 50 cities in the US in which zombie foreclosures represent the highest percentage of all properties in foreclosure. For those readers certainly located among the Top 10, now may be a great time to hit a bid, any bid and get out while the getting is good.
[url=http://www.zerohedge.com/sites/default/files/images/user5/imageroot/2015/06/top zombie cities.jpg]

OUT OF MIND » THE INSANITY OF REALITY » FINANCIAL COLLAPSE » The Vacant Dead: The 50 US Cities With The Most “Zombie” Foreclosures

» Korean Entrepreneurs Build Centralized Ghost City In Iraq: Reminiscent To China’s Vacant Cities Before Corruption Crackdown!
» gOOD mORNING FROM THE wEST cOAST!!!....SHORT END OF THE STICK w/ Mike Harris .......ON MORTAGES AND FORECLOSURES!!!...ALMOST ALL FORECLOSURES HAVE BEEN FRAUDULENT THESE PASS TEN YEARS ...YOU CAN GO BACK AND RECOVER!!
»  Tent Cities Are Taking Over Vast Stretches Of Our Major Cities (And It Is Only Going To Get Worse)
» MUST READ:Moratorium on Mortgage Foreclosures
» BOMBSHELL : ALL GOVERNMENT OFFICES ARE VACANT!