OUT OF MIND » CONSPIRACY THEORIES & ENDURING MYSTERIES » CONSPIRACY & FALSE FLAG EVENTS: PAST & PRESENT »  JFK Jr. Told The World Who Murdered His Father…But Nobody Was Paying Attention

JFK Jr. Told The World Who Murdered His Father…But Nobody Was Paying Attention

JFK Jr. Told The World Who Murdered His Father…But Nobody Was Paying Attention 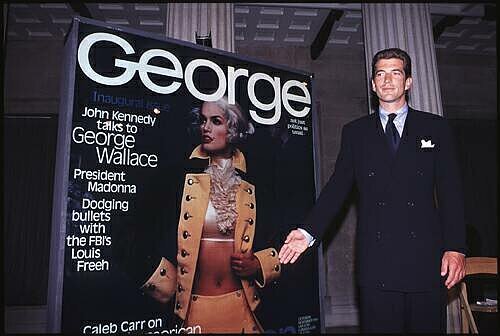 Sent to us by the author, Jane Grey

I suppose most people think that from the day he saluted his father’s casket at just three years old, til the evening his plane went down, he just went about his business, playing the game of life like everyone else. After all, he did live, for the most part, a relatively ordinary life, in spite of being the Prince of America’s Camelot.

So, what do you suppose was going on in the mind of the sexiest man alive? He could have written his own political ticket, yet he went into publishing. Many expected him to land in politics and most likely were a bit perplexed when he decided to publish a magazine instead. Some thought he was afraid to go into politics because of the “Kennedy Curse.” However, nothing could be further from the truth. What he did proved to be more dangerous than any political arena, and he knew that from the start. But…John-John had a mission…and that mission was to expose the villain who orchestrated that “dastardly act” upon his father.


Unbeknownst to the public, John-John was digging deep for proof. And, how else could he expose the truth when all the media outlets were controlled by the very cabal he planned to expose?

Enter…”George.” When he presented his magazine, “George,” to the world, he was, for all practical purposes, signing his own death warrant. “George” was a veiled threat…in a symbolic sort of way. Do you see? How many men named “George” comes to mind at just the thought of President John F. Kennedy’s so called assassination? The cabal wanted his father dead, that is a fact, but the namesake of John F. Kennedy, Jr.’s magazine…their minion, arranged it. And…once he had the proof, the truth would come out in his very own magazine. Do you see?

There was a rumor that John-John had obtained the proof he needed and an expose’ was in the works, until his untimely, and mostly “suspicious,” death. Of course, the media campaigned that he was an irresponsible thrill seeker; but then they would, wouldn’t they? Although many people knew JFK, Jr. was murdered; and they were right about who was responsible…they were just wrong about the reason.

John Jr. was warned by family members about the risks involved in his pursuit. But, he was determined to get justice for his father and bring truth to light, exposing the darkness that shrouds our planet. So ask yourself…what would you do, if you were a mere babe when your father, who just happened to be the most important man in the country, was murdered in such a gruesome manner, and you never had the opportunity to know him…would you just let it go?

http://www.fromthetrenchesworldreport.com/jfk-jr-told-the-world-who-murdered-his-fatherbut-nobody-was-paying-attention/135197
Posted by enerchi at 6/17/2015 08:55:00 PM

OUT OF MIND » CONSPIRACY THEORIES & ENDURING MYSTERIES » CONSPIRACY & FALSE FLAG EVENTS: PAST & PRESENT »  JFK Jr. Told The World Who Murdered His Father…But Nobody Was Paying Attention