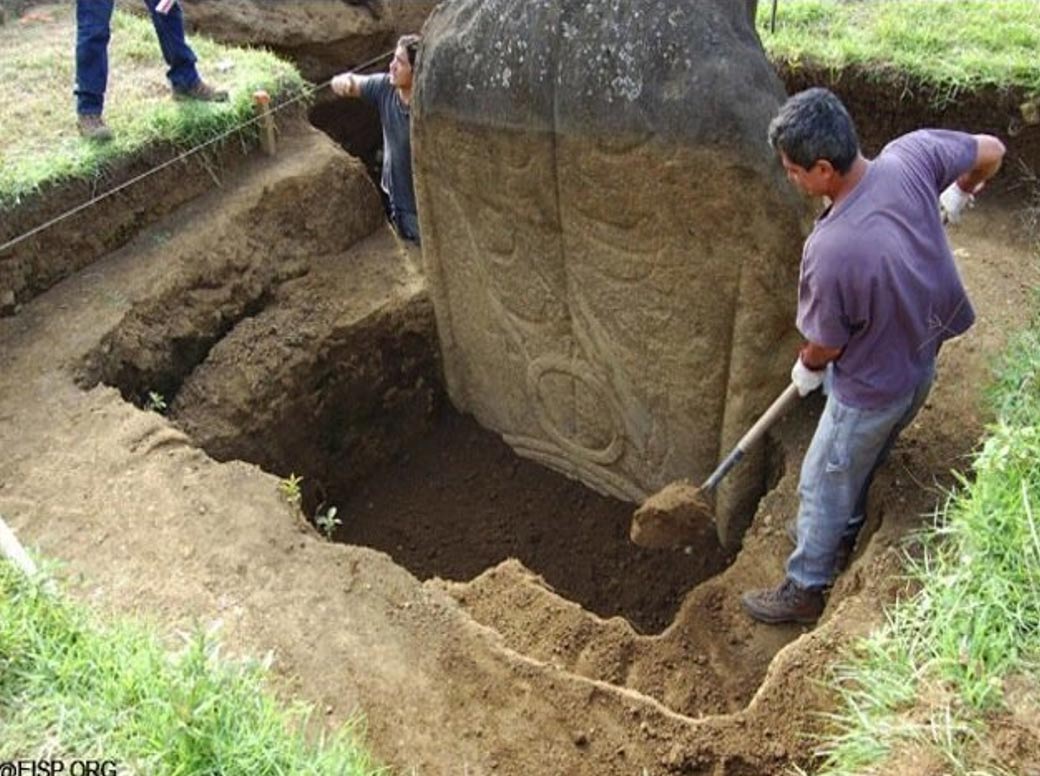 The intricately carved details as recorded in 2012. Archaeologists believe the decorations are tattoos. Credit: The Easter Island Statue Project

New images from the 2012 excavation of Easter Island’s iconic statues reveal the renowned heads are not only connected to giant bodies, but the bodies are covered in mysterious designs and symbols, which researchers have likened to tattoos.

News.com.au reports that a previously unseen series of photographs show in fascinating detail the excavated bodies of the distinctive stone humanoids. Archaeologists were surprised to find that the stone bodies, shielded from environmental weathering beneath the soil, are decorated with ancient details — whirls and crescents believed to be tattoos.

Researchers say the crescent shapes might represent the canoes of local Polynesians, though this is just one theory. The Rapa Nui people who originally settled the island centuries ago erected 887 amazing giant stone statues called moai. The moai have proved to be an enduring mystery with many lasting questions; how and why were they built; were they purposefully buried or did time bury the statues under silt; why do some face away from the sea and towards the island; how were the heavy stones moved around the island; why do some sport heavy red stone hats? Researchers hope to answer these questions and more with investigations. Director of the Easter Island Statue Project, Jo Anne Van Tilburg says, “The reason people think they are [only] heads is there are about 150 statues buried up to the shoulders on the slope of a volcano, and these are the most famous, most beautiful and most photographed of all the Easter Island statues. This suggested to people who had not seen photos of [other unearthed statues] that they are heads only,” reports news website IBTimes.

Initial excavations in 1914 revealed some of the bodies of the giant volcanic rock statues, which can weigh up to 88 tons and be up to 10 meters (33 feet) tall. The hands of some of the statues can be seen to wrap around to the navel.

Academics speculate the stylized figures represented ancestors or high status tribal figures. It is theorized that the stone was quarried on the island, and next it was carved and decorated at the quarries, and then finally the statues were “walked” slowly across the islands to their final positions as guardians protecting against disaster.

Explorer and author David Hatcher Childress wrote in a 2013 article:

"Jean-Michel Schwartz says in his 1975 book ‘The Mysteries of Easter Island’ that he believes the statues were not moved by wooden rollers or sleds but rather by using ropes around the statues which ‘walked’ the statues in the same way as one might walk a refrigerator; by tilting it first to one side, shifting the airborne portion forward, and setting it down again. By this method, the statues would truly walk in a waddle fashion around the island.
Later, a Czech mechanical engineer named Pavel recreated this method along with Thor Heyerdahl. With twenty other men, they tied ropes around a statue and leaned it from side to side while pulling it forward with the rope, a slight variation on Schwartz’s method. The method worked, but was excruciatingly slow. It is an ingenious theory which takes into account the legends of the walking statues […]"

Easter Island was settled between 300 AD and 1200 AD by Polynesians who eventually became the Rapa Nui. Between the 10th and 16th centuries the island community expanded steadily, with settlements being set up along practically the entire coastline. Following this period, however, the population took an extremely rapid decline dropping from 15,000 to approximately 2,000. Past theories explained their demise as the result of economic and social crises due to environmental deterioration: deforestation leading to land erosion. However, recent studies suggest the arrival of Europeans in the 1700s, and slavery and smallpox, are factors which probably devastated the population of the Rapa Nui.

Work continues on the island through university-led research, and the Easter Island Statue Project, along with assistance from the Rapa Nui people.

Galleries of images of Easter Island discoveries can be seen at the EISP.org site, and others are currently being viewed on social media site Imgur. 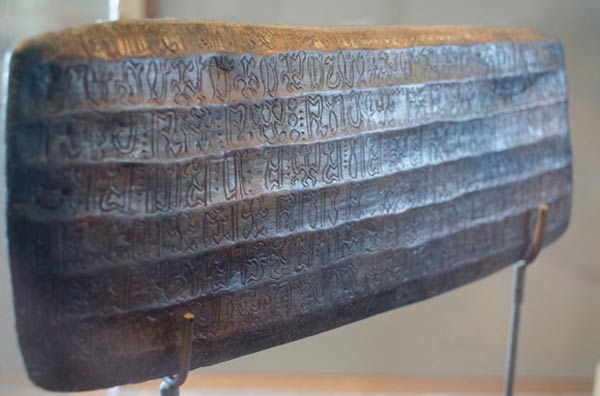 During the 19th Century, ancient artifacts containing a set of etched symbols were discovered on the world-renowned Easter Island, a small remote island located a few thousand miles west of South America, and famous for the hundreds of giant monolithic anthropomorphic statues called moai. The intricate designs appear to be glyphs, or a form of writing, but the meaning of the glyphs has never been deciphered. Some believe that decoding the mysterious writing could offer answers into what caused the collapse of the ancient Easter Island civilization.
The Rongorongo writing was first discovered by Eugène Eyraud, a lay friar of the Roman Catholic Church, who went to Easter Island as a missionary on January 2, 1864. In an account of his visit, he wrote of his discovery of twenty-six wooden tablets containing the unusual inscriptions:

“In every hut one finds wooden tablets or sticks covered in several sorts of hieroglyphic characters: They are depictions of animals unknown on the island, which the natives draw with sharp stones. Each figure has its own name; but the scant attention they pay to these tablets leads me to think that these characters, remnants of some primitive writing, are now for them a habitual practice which they keep without seeking its meaning.” 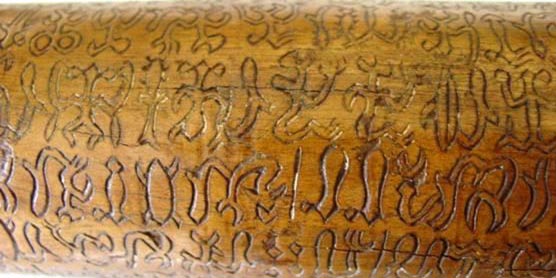 A mid-section of the Santiago Staff with Rongorongo script. (Wikipedia)

The name Rongorongo comes from the Rapa Nui language, which is the native language of Easter Island, and means "to recite, to declaim, to chant out.” The irregularly shaped wooden tablets were weathered, burned, or otherwise damaged when they were found. The glyphs were also found on a chieftain's staff, a bird-man statuette, and two reimiro ornaments. The glyphs are written in-between lines that run across the tablets. Some tablets are “fluted” with the inscriptions falling within the channels created by the fluting.  The Rongorongo images are shaped like humans, animals, plants, and geometric forms. Every symbol that contains a head is oriented with the head facing up, and either facing forward, or profiling to the right. Each symbol is approximately 1 centimeter high. The orientation of the writing is read from left to right, bottom to top. This is known as reverse boustrophedon. According to oral tradition, the tools used to make the carvings were obsidian flakes or small shark teeth.

The Rongorongo characters were typically written between lines that run across the tablet. (Wikipedia)

The age of the tablets is unknown, as very little direct dating has been done, but they are believed to have originated around the 13th Century, around the same time as forest clearing.  However, this is merely speculative as the inhabitants of Easter Island may have felled a small number of trees for the specific purpose of creating the wooden tablets.  One glyph appears to resemble a palm tree, and is thought to be the Easter Island palm, which disappeared from the island’s pollen record in 1650, suggesting the script must be at least that old. 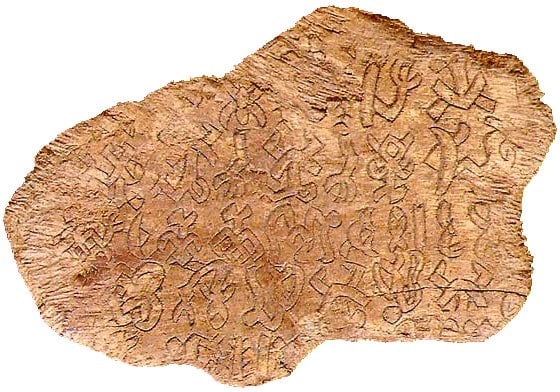 Side A of Rongorongo Tablet, the Stephen-Chauvet fragment. (Wikipedia)

Deciphering the glyphs has proven difficult. Assuming that Rongorongo is writing, there are three barriers that make it difficult to decipher: the limited number of texts, the lack of illustrations and other contexts with which to understand them, and poor attestation of the Old Rapanui language, which is likely to be the language reflected in the tablets. Some believe that the Rongorongo is not true writing, but proto-writing, which is a set of symbols that convey information without containing any truly linguistic content. According to the Atlas of Language, the Rongorongo “was probably used as a memory aid or for decorative purposes, not for recording the Rapanui language of the islanders.”

While it remains unclear exactly what the Rongorongo is intended to convey, the discovery and inspection of the tablets remain an important key to understanding the past civilizations of Easter Island. The intricately inscribed, neatly lined images indicate that the ancient island civilization had a message to convey, whether it was a casual display for decorative purposes, or to pass messages and stories forward from generation to generation. Perhaps deciphering the codes will someday lead to answers about the collapse of the island civilization, but for now, the tablets remain a mysterious symbol from the past.