OUT OF MIND » TRUTH IN CONSPIRACY THEORIES? » HISTORIES MYSTERIES » The Stone Head of Guatemala that History Wants to Forget

The Stone Head of Guatemala that History Wants to Forget 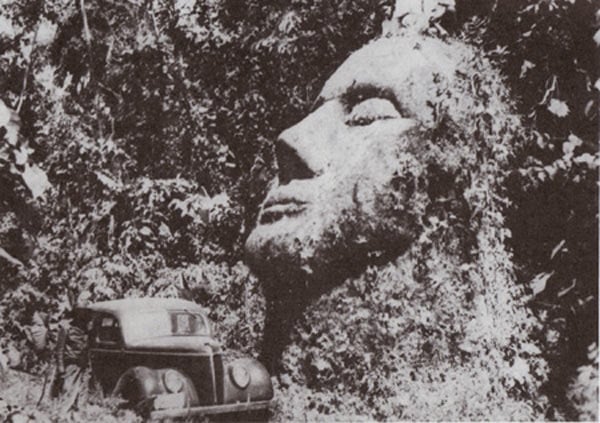 The Stone Head of Guatemala that History Wants to Forget
Over half a century ago, deep in the jungles of Guatemala, a gigantic stone head was uncovered.  The face had fine features, thin lips and large nose and its face was directed up at the sky.  Unusually, the face demonstrated Caucasian features which were not consistent with any of the pre-Hispanic races of America.  The discovery rapidly attracted attention, but just as quickly it slipped away into the pages of forgotten history.
News of the discovery first emerged when Dr Oscar Rafael Padilla Lara, a doctor of philosophy, lawyer and notary, received a photograph of the head in 1987 along with a description that the photograph was taken in the 1950s by the owner of the land where the head was found and that it was located “somewhere in the jungles of Guatemala”.
The photograph and story was printed in a small article in the newsletter ‘Ancient Skies’, which was picked up and read by well-known explorer and author David Hatcher Childress, one of our guest authors at Ancient-Origins.net, who sought out to discover more about the mysterious stone head. He tracked down Dr Padilla who reported that he found the owners of the property, the Biener family, on which the monolith was found. The site was 10 kilometres from a small village in La Democracia in the south of Guatemala.
However, Dr Padilla said that he was in despair when he reached the site and found that the site had been obliterated: “It was destroyed by revolutionaries about ten years ago. We had located the statue too late. It was used as target practice by anti-government rebels. This totally disfigured it, sort of like the way the Sphinx in Egypt had its nose shot off by the Turks, only worse,” he said.  The eyes, nose and mouth had completely gone. Padilla was able to measure its height as between 4 and 6 metres, with the head resting on a neck. Padilla did not return again to the site due to armed attacks between government forces and rebel forces in the area.
The destruction of the head meant the story died a rapid death until it was picked up again a few years ago by filmmakers behind “Revelations of the Mayans 2012 and Beyond” who used the photograph to claim that extra-terrestrials have had contact with past civilisations. The producer published a document written by Guatemalan archaeologist Hector E Majia who wrote: "I certify that this monument presents no characteristics of Maya, Nahuatl, Olmec or any other pre-Hispanic civilization. It was created by an extraordinary and superior civilization with awesome knowledge of which there is no record of existence on this planet."
However, far from helping the cause and the investigation into the monolith, this publication only served to have the opposite effect, throwing the whole story into the hands of a justifiably sceptical audience who thought that it was all just a publicity stunt. Even the letter itself has been drawn into question with some saying that it is not genuine.
Nevertheless, it appears the giant head did exist and there is no evidence to suggest the original photograph is not authentic or that Dr Padilla’s account was false.  So assuming it was real, the questions remain: Where did it come from? Who made it? And why?
The region where the stone head was reported to have been found, La Democracia, is actually already famous for stone heads which, like the stone head found in the jungle, also face skyward.  These are known to have been created by the Olmec civilisation, which flourished between 1400 and 400 BC.  The Olmec heartland was the area in the Gulf of Mexico lowlands, however, Olmec-style artefacts, designs, monuments and iconography have been found in sites hundreds of kilometres outside the Olmec heartland, including La Democracia.
Nevertheless, the stone head depicted in the 1950s photograph does not share the same features or style as the Olmec heads.  The late Phillip Coppens, Belgian author, radio host and TV commentator on matters of alternative history raised the question of whether the head “is an anomaly of the Olmec period, or whether it is part of another – unknown – culture that predated or post-dated the Olmecs, and whose only artefact identified so far is the Padilla head”.
Other questions that have been posed include whether the structure was just a head, or whether there was a body underneath, like the Easter Island statues, and whether the stone head is linked to any other structures in the region.  It would be nice to know the answers to these questions but sadly it appears the publicity surrounding the film “Revelations of the Mayans 2012 and Beyond” only served to bury the story deeper into the pages of history.  Hopefully an ambitious explorer will pick up the story once again and investigate further to find the truth regarding this enigmatic monument.
By April Holloway
Read more: http://www.ancient-origins.net/ancient-places-americas/stone-head-guatemala-history-wants-forget-001104#ixzz3fmrgKpxI
Follow us: @ancientorigins on Twitter | ancientoriginsweb on Facebook

WOW, nice find Purpz. Imagine what we have not yet found and unfortunately what has been hidden and/or destroyed.

and you are most welcome.. glad you liked it :)

hope all is well with you and your family and friends!

There is a beach in Canada that has a man made break water which is made out of 1000's stones which are covered in hieroglyphics. Such a shame.

Thank you, Family is doing ok.
Buddy has had his first surgery and so far has been cleared of all cancer!
Hope all is well with you also.

Oh that is great news! Very happy to hear this!

I am hanging in there. Still searching for employment, fending off foreclosure. Same old thing LOL

But the kids and grand kids are a great distraction. :)

OUT OF MIND » TRUTH IN CONSPIRACY THEORIES? » HISTORIES MYSTERIES » The Stone Head of Guatemala that History Wants to Forget

» The Stone Head of Guatemala that History Wants to Forget
» Is the Stone Head from Guatemala Proof of an Ancient Extraterrestrial Race?
» The Guatemala Stone Head—Evidence of Ancient Alien Worship?
» Ancient Stone Pillars confirm date of Comet Strike that changed Human History
» Disclosure of the Year: Mayan Stone Head found on Mars! Is it Real? Jim Stone!