5 Harmful Myths We Need to Stop Telling About LSD

First synthesized by chemist Albert Hofmann in 1938, lysergic acid diethlamide, commonly known as LSD, remains one of the most spectacularly sensationalized and popularly misunderstood drugs.

Capable of inducing intense sensory hallucinations and provoking overpowering (and sometimes unpleasant) reflections about the nature of reality, this powerful drug has only recently won recognition for its potential role in psychotherapy and medicine.

And yet, the substance carries with it a large stigma of dangerous outcomes, unwanted flashbacks and medical shortcomings. But what's true and what isn't? Some of these commonly held ideas are inspired by misunderstandings of how drugs work in the body, while others are relics of drug-war propaganda first circulated decades ago. But all of these misconceptions unfairly relegate a substance which has profound effects on the human psyche to the margins of society and science.

1. LSD is extremely dangerous for you and for society. 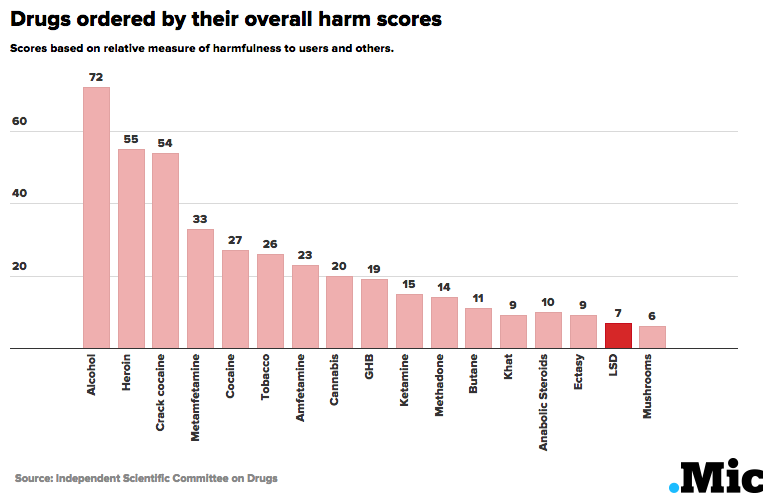 The widespread perception of LSD as a uniquely destructive narcotic has to do with the drug's ability to cause impressive and deeply affecting hallucinations and changes of perception. But compared to legal drugs like alcohol and tobacco, LSD is a blip in the radar and actually one of the least harmful common drugs.

According to a 2010 study that attempted to quantify the social harm posed by each commonly used psychoactive drug in the U.K., compared to the much more common drugs like alcohol heroin, cocaine and even cannabis, LSD is not very harmful to either the user or others. The study's lead researcher, David Nutt, was dismissed in 2009 from a senior U.K. advisory position for advocating reform to drug laws.

The results make intuitive sense — someone who drinks regularly is probably more likely to get in a preventable accident than the occasional tripper who pays attention to set and setting — but they also align with recent research by Norwegian researchers Pål-Ørjan Johansen and Teri Suzanne Krebs that found psychedelics "induce profound experiences while at the same time having a safety profile comparable to many activities of daily life, such as riding a bicycle or playing soccer."

Taking a single hit of LSD probably won't set you up for terrifying repeat trips for the rest of your life. According to io9, the myth of flashbacks may date back to a 1991 Drug Enforcement Agency meeting in which a speaker "allegedly tied the number of homeless in San Francisco to the use of LSD in the 1960s and the Summer of Love."

The kinds of flashbacks popularized by drug-war panic don't actually happen, and those that do are usually brief and mild. A small minority of users, however, may experience hallucinogen persisting perception disorder, which manifests itself in audiovisual and sensory distortions like flashing colors, visual illusion and visions of fractals and other trippy phenomena long after the LSD has left the body.

HPPD is poorly understood, but probably very rare. In 2002, psychiatrist John Halpern concluded previous studies on the condition hadn't properly established whether the reported symptoms could be linked to factors like other drug use or neurological and psychological disorders.

"I think the majority of people could trip relatively safely, but there's a discrete percentage. ... Maybe one person in 20 will develop serious, continuous problems related to the hallucinogenic experience," psychiatrist Henry David Abraham told Popular Science in 2013. "But that's true for virtually any drug."

3. It will drive you insane.

Earlier this year, Johansen and Krebs, the Norwegian researchers, published a large-scale study positing no evidence of a link between LSD and mental health problems. A similar American study of more than 190,000 people's health records even found some evidence that classic psychedelic use was associated with lower lifetime rates of suicidal thoughts and actions.

University of California, Los Angeles, pediatric psychologist Charles Grob told Nature that Krebs and Johansen's study "assures us that there were not widespread 'acid casualties' in the 1960s," although he cautioned that in isolated cases symptoms like HPPD can and do occur.

"We are not claiming that no individuals have ever been harmed by psychedelics," Johns Hopkins University behavioral pharmacology researcher Matthew Johnson, who worked on the American study, told Nature. "Anecdotes about acid casualties can be very powerful — but these instances are rare."


4. LSD has no medicinal benefits whatsoever.

Psychedelic drugs may be able to help terminally ill patients come to terms with their mortality and avoid much of the suffering that comes with death anxiety. In one Swiss study, 12 fatally ill patients were administered varying doses of LSD as a complement to traditional psychotherapy. The eight patients given larger doses of the drug improved, while the four others got worse.


Halpern, who runs McLean Hospital's Laboratory for Integrative Psychiatry, ran a series of experiments with psilocybin with similar results. He told the New York Times that psychedelics cause experiences in which people feel:

"... something you are a part of, something else is out there that's bigger than you, that there is a dazzling unity you belong to, that love is possible and all these realizations are imbued with deep meaning ... [it] gives you, just when you're on the edge of death, hope for something more."

"One patient had cluster headaches for 27 years. He had debilitating three-month long cycles, and wasn't responding to meds. He was devastated. He was getting 40 cluster headaches a week," Halpern told the Daily Beast, adding that it seems to send patients into "remission. It's astounding."

Other research has indicated that psychedelic substances like LSD and psilocybin could be also remarkably effective aids for people looking to quit smoking or ditch their alcoholism for good.


5. The government would never lie to us about LSD.

Years before President Richard Nixon started the war on drugs, the U.S. government and CIA ran the MK-ULTRA program from 1953 to 1964. The project used LSD on Americans to determine whether the drug could aid hypnosis and indoctrination or simply be used as an instrument of terror against the agency's enemies. CIA agents also initially believed that acid might be useful as a truth serum, using it during interrogations.

Time magazine wrote that since the tests were "completely uncontrolled" they ultimately proved "useless in providing useful data." Additionally, since this was years before very much was known about LSD and its effects, the CIA could have wildly endangered hundreds of unknowing persons. Safe administration of LSD relies on crucial elements like consent, preparation and mood, none of which could be found in the CIA experiments.

One former deputy U.S. marshal told SF Weekly that, while high on an unsafe dose of LSD during the MK-ULTRA experiments in 1957, he stole two service pistols and used them in a botched robbery attempt under the influence of the drug. A 1951 outbreak of mass hallucinations in the French village of Pont-Saint-Esprit officially blamed on ergot poisoning has been widely speculated to be linked to MK-ULTRA.

Today, the Drug Enforcement Administration keeps LSD classified as a Schedule I drug, labeling it one of the "most dangerous drugs" with "no currently accepted medical use and a high potential for abuse." A growing body of scientific research, however, may ultimately prove that the blanket prohibition on LSD is based on another set of lies.

Correction: June 9, 2015
An earlier version of this article attributed an article titled "The Legacy of the CIA's Secret LSD Experiments on America" to the New York Times. The piece was published in Time magazine.

Tom McKay is a staff writer at Mic who covers national politics, media, policing and the war on drugs. He has previously written for The Daily Banter, Wonkette and MTV News.

» Stop the nonsense of the medical field telling you to cut off parts!
» 417Hz Stop Bad Vibes From The Past & Trapped Negative Energy | Stop Unwanted Thoughts & Patterns
» The David Icke Videocast: All This Surveillance To Stop 'Terrorism'? No, To Stop Us
» How To Stop Thinking (How to Stop Thought) - Teal Swan -
» 5 Myths About CBD Oil That Need To Be Dispelled