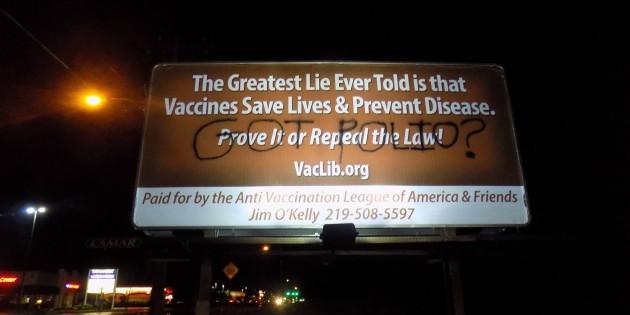 Share4.2K
Tweet54
+19
Pin10
TOTAL SHARES 4.3K
An Indiana father discovered his efforts to honor the life of his lost vaccine-injured daughter were recently vandalized, when a billboard he ordered was thoughtlessly spray painted by two men. If these criminals knew the heartache this father has faced during his daughter’s 36-year battle with vaccine injuries, compassion and common sense would dictate that they would not have committed such a cruel, heartless act.
Jim O’Kelly, 74, with support from the new Anti-Vaccination League of America and others, has funded the display of seven billboards in northwestern Indiana, in hopes of informing parents of the truth about the medical and vaccination system in America. Many people are unaware that vaccine companies cannot be sued if a child suffers a vaccine injury or death from a vaccine. O’Kelly wants vaccine manufacturers and the government to “prove the vaccines save lives or repeal all mandatory laws.”
This travesty has been standard policy since 1986, when the National Childhood Vaccine Injury Act was passed by the US government. Families whose children are injured or killed by vaccines must take their case to a special court before the two-year statute of limitations expires. The emotional and financial costs are more than most families can bear. Over $2.5 billion dollars has been awarded to vaccine injury victims and their families, although, sadly, two out of three applicants are denied their requests. [1]

As part of his efforts to educate people about the risks of vaccines, O’Kelly has used the loss of his daughter, Cathy, to spread much-needed awareness about vaccine injuries and laws that favor pharmaceutical companies rather than families. In addition to the billboards on display, he has organized a vaccine-awareness group, the new Anti-Vaccination League of America. He is organizing similar outreach efforts in other states. He has also written letters to over 150 lawmakers in Indiana.
When Cathy was six years old, her parents took her to the pediatrician for a vaccine against smallpox, which had a reputation as a terrible disease. At this time, Cathy was healthy and lively. In the years following the vaccination, Cathy and her family endured many resulting struggles, challenges that are common to families whose child has suffered a vaccine injury.
In the 1970s, vaccine injuries were less commonly known to parents, as children received only a fraction of the 69 doses of vaccines recommended to children today by age 18 by the Centers for Disease Control and Prevention (CDC). [2] In addition, parents did not have ready access to medical databases and other resources to research the dangers of vaccine ingredients. The Vaccine Adverse Event Reporting system, commonly known as VAERS, had not yet been established.
Within a short time after receiving the smallpox vaccination, Cathy developed swelling in her knees, an affliction that puzzled doctors and plagued her for the rest of her life. She also developed a large lump and severe stiffness in her neck. For months, doctors were ignorant of Cathy’s vaccine injury, incorrectly blaming possible afflictions such as arthritis, lupus, and collagen disease. 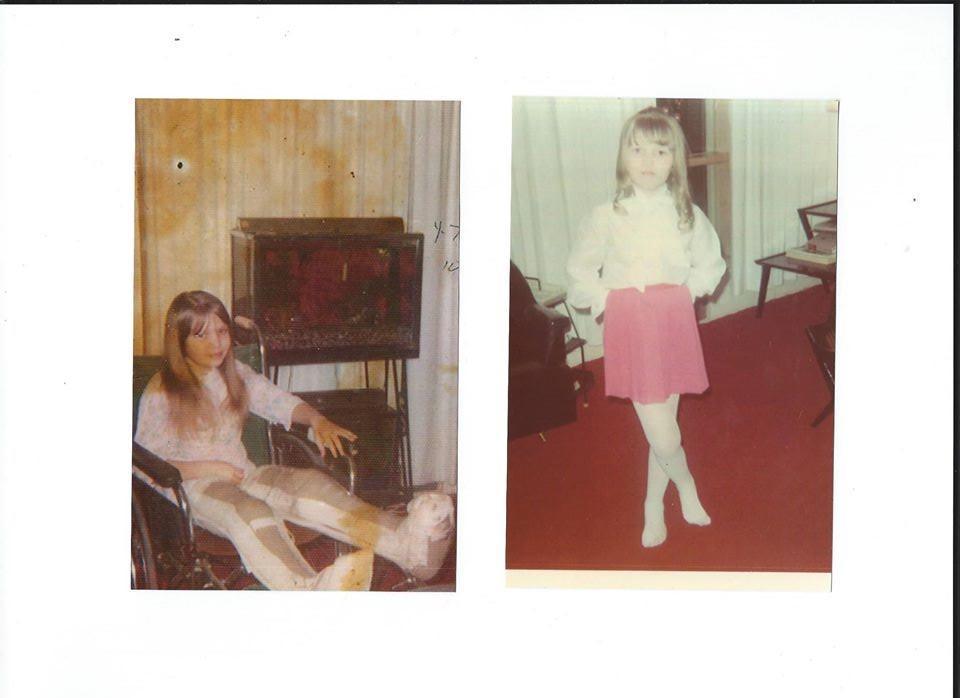 In the years that followed, Cathy's parents disagreed with doctors about the cause of her swelling and stiffness and the safest treatment options for their beloved daughter. O'Kelly faced his own pain as a father when he was unable to relieve his daughter's suffering caused by her vaccine injury.
Cathy's vaccine injury later took away her ability to walk. She lost her marriage due to the debilitating effects she suffered from the smallpox vaccine, and her children were placed in another home. When she was hospitalized, doctors compromised her dignity, refusing to honor her requests, denying her the Bill of Rights they offer to patients during treatment.
Cathy's whole life, until the day she died, was impacted by the adverse effects from her childhood vaccination.


What Most People Don't Realize About The Vaccine Debate

There are several important, controversial issues involved in the emotionally charged subject of vaccination. To pharmaceutical companies, profits from vaccines are at stake, in amounts that most of us cannot fathom. The vaccine market in 2013 was estimated at $25 billion. [3] By 2016, revenues from vaccines are expected to reach $52 billion. [4]
Vaccine manufacturers are highly motivated to do anything to keep their vaccines popular with parents and government groups. These companies are counting on vaccines to replace lost profits from “patent expiries and weakened pipelines” in their other pharmaceutical divisions.
To pro-vaxers, this issue is about respecting their beliefs – their science – about the eradication of disease, which they are certain was due to the advent of vaccines. In their quest to promote vaccines, they often ignore the evidence that good hygiene, clean water, and better nutrition were the real saviors. Old diseases were also “eradicated” by giving them new names.
To our government, this issue has become a debate about mandatory vaccination versus individual choice. Many elected officials are unwilling to give up the powerful support they receive from pharmaceutical companies.
To parents like Jim O'Kelly, this issue is about preventing more children from suffering the devastating, lasting effects of vaccine reactions, which come in many forms, so children like Cathy are not sickened or killed from a “safe” vaccine.
Her father shared with us, speaking about the unethical practices by the government and vaccine manufacturers:
“My message is about them proving that vaccines save lives and prevent disease, not about repealing the no-liability law. I have no interest in doing that. Because there is no amount of money that can take the place of a lost child.
And I know that no one can prove that any vaccine ever saved one life or prevented one disease. That point needs to be emphasized. I understand what most people think when I say that, but it doesn't matter, because the vaccine emperor wears no clothes. It is a colossal fraud. And somebody needs to do this. So I decided that I am somebody.”
Parents who believe in individual choice, parents whose child was injured or killed by a vaccine, and parents who have researched the dangerous ingredients in vaccines know that profits and the so-called, misnamed “greater good” are not more important the the health and well-being of their individual children.


What Can You Do To Protect Your Child?

A government amendment to the original, ineffective childhood vaccine safety act was supposed to “promote the development of childhood vaccines that result in fewer and less serious adverse reactions than those vaccines on the market on December 22, 1987.” [5] Sadly, this amendment has also been ineffective and largely ignored, as the number of children struggling with symptoms of autism, ADHD, autoimmune disorders, and allergies have reached epidemic proportions.
What can you do to help protect the life of your child?
To help prevent the devastating effects of vaccine injuries, those of us who have discovered the truth, hidden from us for decades by the groups who profit from vaccination policies, must share with others what we have learned. Please share this article with other parents.
Speak with your lawmakers, as O'Kelly has done, to let them know you do not support current vaccine laws or mandatory vaccination. Remind your government leaders that parents deserve choices about what is injected into their children's bodies.
Most importantly, you must value your child's health enough to research the vaccines they are scheduled to receive. Contrary to pharmaceutical-sponsored mainstream media, a vaccine is not the answer to better health.
You can encourage other parents to do their own research about vaccine ingredients, on this website and other sites not funded by pharmaceutical companies. For more information about the funding of often-trusted websites, you may wish to read Take Off the Billion-Dollar Blindfold.
Finally, you can offer your support to Jim and other parents who are facing the lifelong effects of vaccine injuries in the comment section below.

The government has enacted legislation to protect pharmaceutical companies from liability when children are injured or killed by vaccines. Amendments and related laws have failed to address the rising numbers of vaccine injuries and health disabilities our children are facing. These laws and vaccine mandates ignore the blatant evidence that proves vaccines are ineffective and dangerous.
We must do our own research to prevent more children from suffering vaccine injuries. We must support families who are living with a vaccine injury or have lost a child due to a vaccine.
With regard to his mission to help other families avoid the tragic losses he has faced, Jim O'Kelly shared, “If it takes one person away from the medical mafia, it will be worth it.”