A Commentary and Call by Kevin D. Annett


On September 22, the world’s oldest lie and its greatest crime is coming to the heartland of America. The aim of this power is to enlist Americans in its plan to establish a single tyranny over humanity: not a one world government, but a global corporatocracy of one master and many slaves. The mask worn by this power is the Church of Rome and its ruler, Jorge Bergoglio. 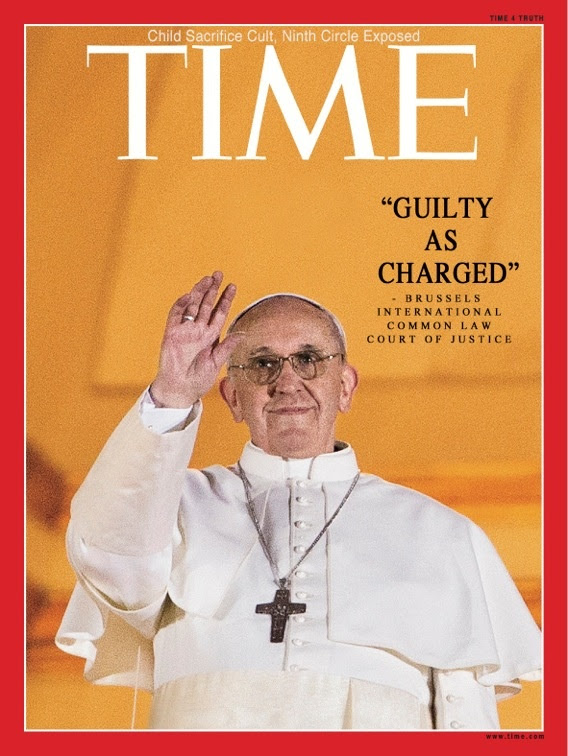 For many years I have helped to document and expose the murderous nature of this power called the Vatican, and to prosecute it for its crimes against children and so many others. In so doing, we have pulled back its deceptive mask and shown it for what it is, in all of its corruption, ritual sacrifice and murder. And as we have done so, we have revealed how cowardly this entity is: how it in fact has no true power, but flees from our exposure of it, and hides behind its lies so as to continue to confuse humanity, now that we can see it for what it is.

And so, despite our exposure of this oldest enemy of mankind, its hold over the minds and hearts of many people continues. Because of our success in exposing and confronting it, this power in Rome has donned a new, deceptive mask in the form of a smiling old man in a white robe, who speaks of compassion while he honors and names as a “saint” a mass murderer of Indians; who calls for “saving the planet” while funding and profiting off GMO companies, Big Pharma and the arms industry; and who presents himself as a new hope for mankind while hiding his own trafficking and murder of innocent children. And very soon, this smiling lie calling itself Pope Francis will be meeting with the United States government and the United Nations to enlist their help in imposing a new global tyranny over mankind.

To those with understanding, we have no need to explain the demonic nature of the Vatican and its imprisoned followers. But whether or not we share this understanding, we are united with many men and women around the world in our determination to stop the crimes of the Vatican and abolish its power in the world. And we have learned from hard won experience that we can in fact halt and undermine this thing called the Church of Rome, despite all of its apparent power: but only if we use the weapons of God and our own humanity to nullify the authority of Rome and its puppet governments and laws.

This past week, we have demonstrated once again how even a few of us standing in the power of truth can force the Vatican to back away from its plans. For when Jorge Bergoglio learned that some of our people plan to confront and stop the child trafficking event known as the World Meeting of Families in Philadelphia, he changed his itinerary to avoid the most public aspect of that event. Bergoglio knows his own guilt and the crimes of his church, and that guilt makes him weak and defensive; for he knows too how our same efforts have forced the removal of his predecessor, Joseph Ratzinger, and that Jorge Bergoglio himself faces a standing citizen arrest warrant because of his own violation of children.

The truth itself is God’s own revealed power, but it needs men and women to wield it. We cannot act alone. It is now time for everyone of conscience to stop this global criminal power in Rome: everyone, starting with the police and the judges and the soldiers who are the peace keepers of America, who can and must defend our children and our liberties against the openly murderous church of Rome – especially now that the United States government is aiding and abetting its crimes, and thereby is committing crime itself, in your name and with your tax money.

As a convicted criminal, and as the head of a body whose policies of protecting child rapists is a clear threat to the children, the laws and the sovereignty of the United States of America, Jorge Bergoglio needs to be prevented from entering America, and deported if he does arrive. That is simply the law. Bergoglio must be confronted, and exposed, for we know that children will die at the hands of him and his followers when he is in America. If we do not act, and confront these child killers in church robes, at least four innocent children will die brutally in Ninth Circle sacrificial rituals that will be conducted in catholic churches in Washington DC on September 23, and in Philadelphia on September 26.Two of these children are Indians, a boy and a girl, who were taken from the Gila reservation in Arizona.


But even as we fight for the lives of these children, and as in any exorcism we name and banish the evil in our midst, our real power over this entity lies not in attacking it but in our active nullifying of its authority and legitimacy; and in our replacing of that power with a new authority: the law of God alone. And so even as some of us chosen for the task will take on and confront this Beast, the majority of Americans and people everywhere must publicly demonstrate their denial of it by boycotting Jorge Bergoglio and his visit. Turn off your TV and internet, and ignore the news coverage of his trip. Surround catholic churches and call on its people to stay out of them and to stop funding the murderous church of Rome. Refuse to do anything during the five days of his visit to America, and fast and pray for the evil to depart. For by such a public lamentation and shunning of Bergoglio and his lies, we are weakening that Lie and nullifying its power to deceive and violate and murder.

But even more importantly, by our turning our collective back on the entity of Rome in this way we are embodying a divine reality, which is the source of our power and our hope: the reality that in the face of the abomination in Rome and its centuries of crimes against God and humanity, God has nullified the false church of Rome and all of the worldly authority that serves it. For we are on the brink of a new world: not the tyranny being concocted by global elites, but the reign of God’s law as a new covenant with humanity.

And so now we each must make a simple choice, concerning what power we will serve: lies or truth; life or mass murder; the global corporatocracy, or the new, common law covenant of free people that stands over and above our allegiance to all governments, all laws, and all religions.

We will be demonstrating our allegiance to this new covenant in the days and the years ahead. We invite you to join us – for the children, and our future as people under only one authority: that of God, and our Godly conscience, as a Republic of Equal and Sovereign people.https://youtu.be/YnFvTD7RCSU